“At the end of everything, one must accept the company of immortals.”


Like the Doctor, Steven Moffat doesn’t like endings.  But it’s high time he started doing so.  Chalking up his fifth successive series as show-runner/chief writer – now free and clear of his predecessor in the seat, Russell T Davies, not to mention clocking up more time-travel miles than the majority of the original series’ producer tenures – and it’s clear that even he is making exit strategy contingencies.  But for a show that pretty much consumes your every waking moment (and when it occasionally doesn’t, then Sherlock fills any remaining gaps) the situation would appear to have arisen that, as of this moment, there is nobody to step into the breach.  Moffat’s tie-in interview with Radio Times this week is telling: he claims to be actively involved with helping appoint his successor but at the same time won’t leave the show in the lurch.  Or, in 1980s speak, he has been persuaded to stay on.  Whether the delay is down to Doctor Who’s previous lustre having been somewhat dimmed this year by a car-crash timeslot and a seemingly disinterested general public finding World Cup rugby or TV karaoke a more tempting prospect, remains tantalisingly unanswered.  But overnight figures of less than five million and consolidated ones well under seven should be setting off all the bells in anyone’s cloister chambers.  And it’s not just those ever so intangible totals that should be of concern, but also the audience share and the fact that even its same channel stable-mates are outperforming it week in, week out.  Given that Christmas Day’s annual outing – its eleventh consecutive one since 2005 – has a far more child-friendly, adult-accepting slot of 5.15pm may in part answer that question.  Because irrespective of falling figures across the board that even bore witness last Christmas Day, if Doctor Who flops again in less than three weeks you suspect there really will be no hiding place.

But the real reason that Moffat should accept endings is of far more narrative importance than his own accession to the retirement home of the show’s creative directors.  As enjoyable as ‘Hell Bent’ begins as a spaghetti western spin on Gallifrey’s most notorious prodigal son’s return home, yet again the now quite self-harming inertia to pick the scabs of storylines and character arcs that have already reached their natural shelf-life raises its ugly head.  It’s become a topic long past cliché that Moffat lacks the innate writerly skill of being able to ‘kill your darlings’, so the reappearance of Jenna Coleman’s Clara – plucked from the moment of her fixed-point demise in ‘Face the Raven by a new Time Lord innovation called an extraction chamber (aka ‘get out of jail free card’) – elicits as many mocking titters as it does tired groans.  Once again the Doctor’s plan within a plan within a plan becomes an episode’s turning point (and yet another in a long-trodden line of deus ex machine trapdoors), perhaps robbing us of a far better story where, say, the Doctor leads a rag-tag group of shobogans in a proletariat uprising against their feudal Time Lord oppressors.  Like I say, ‘Hell Bent’ promises just that for its first twenty minutes or so, with Capaldi channelling more than a hint of Clint Eastwood man-with-no-name coolness, as he banishes both Time Lord President Rasillon (here in far more grumpy regenerated form as Donald Sumpter) and then the High Council to become both the default President elect and fabled hero that won the Time War.  Rachel Talalay’s measured, almost dialogue-free direction and Murray Gold’s aping of Ennio Morricone’s iconic spaghetti scores don’t exactly harm things either, and Capaldi’s gravitas and sheer menace suggest that this new sheriff in town isn’t going anywhere.  The deserts of Lanzarote match the fabled Gallifreyan burnt orange template and the moment a squadron of Time War soldiers toss away their guns could be the finest image of this season.


And then things go horribly, and predictably, wrong.


That fade to black that then rises upon Clara’s final moments on Trap Street are perhaps the biggest narrative U-turn made yet, even under Moffat’s stewardship.  Any lingering notions of this being High Noon, with Sheriff Capaldi adopting the role of Henry Fonda are snuffed out, and within moments we are launched into an alternative finale; one that sees the Doctor go to the ends of creation and break his own strict standards of ‘never being cruel or cowardly’ (since when is robbing a fellow Time Lord of one of his finite regenerations akin to exaggerated male influenza?) just because HE CAN’T LET CLARA GO.  You could be forgiven for saying that from this point ‘Hell Bent’ becomes a meta-narrative examining its own creator’s lingering issues with closure.  If ‘The War Games’ final episode saw a Doctor cowardly desperate to avoid the consequences of his own interference, then ‘Hell Bent’ is all about a writer who has encapsulated all his inabilities to be brutal when required into just one character.  Even Amy and Rory were given the (somewhat dubious) exit explanation that – despite living back in 1930s New York – the Doctor could never see them again: a tissue thin rule that you suspect Capaldi’s Doctor wouldn’t even bless with his consideration.  But seemingly from day one, the Impossible Girl has been Moffat’s Achilles heel: the one constant in the Doctor’s life that will never, ever let him go.  She’s been ever-present throughout his time stream, talked him down from ending the Time War in genocide, and even provided him with a mission statement from under his childhood bed.  Impossible hardly even begins to cover it.  And therein lies the problem, as finally given the chance (again) to draw a line under Clara’s story, Moffat instead opts for the frankly deranged suggestion that until/if she ever returns to Gallifrey, she and her likewise immortal chum Me can have their own spin-off adventures in much the way the Paternoster gang still haven’t.  How much better, and how much more understated, would have been that simple farewell a year ago before Jenna Coleman’s cold feet twice got the better of the show’s chief writer.


And Moffat’s continuing obsession with turning Doctor Who into a clearly CS Lewis influenced combination of folklore and fairy tale now sees its apotheosis in the notion that ‘stories are where memories go when they’re forgotten’.  In fact, the framing device of having a seemingly amnesiac Doctor tell his story to a stranger we all recognise (while he doesn’t) even feels the need to ramp the point home with lines like “You like a cliff-hanger, don’t you?”, “Is this a story or did this really happen?” and (my personal favourite) “Was I supposed to understand any of that?”  If Steven Moffat’s main intention is indeed to rewrite as much of established lore as he can get his hands on, or to bait fans with throwaway bon mots about Susan and the TV movie’s half-human notion, then he is clearly of the opinion that by meticulously recreating a 1960s TARDIS interior with painstaking detail he is exonerated of all blame.  And to be fair, he may have a point – certainly my Saturday night Twitter feed was as bloated with squeeing fangasms praising an (admittedly) design tour-de-force by Michael Pickwoad and co, as it was any denigration of an episode whose story came crashing off the rails once Clara re-entered from stage left. 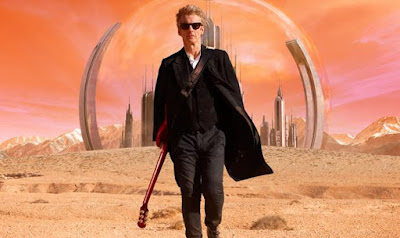 And this sense that the showrunner needs answer to no one is even extended to this year’s meme, the hybrid.  Okay, the Ashildr/Me mix of human and mire may have been a bit too obvious to those bar the least switched on of viewer (which, admittedly, this year has become more and more evident), but when you throw in a number of multiple choice options – human/Doctor, Doctor/Clara, Doctor/Missy – with no clear explanation bar the Doctor’s sudden realisation that his gone-too-far shtick has resulted in a self-fulfilling prophecy, then you know that narratively you’re at a dead end.  If you haven’t got an answer to your season long enigma, then perhaps you shouldn’t ask the question in the first place?  But hey, look at the roundels on that baby and the painful recreation of the double doors leading to the TARDIS’ interior.  All you needed was a recreation of the food machine, and its mars bar lumps of egg and chips, and you probably could have had the last fifteen minutes elapse in silence for all the pretty pictures being thrown at you in lieu of any narrative cohesion.


Like the Doctor, I’ve gone too far.  But unlike Moffat, I know when to stop.  Season nine has been a bumpy ride, both onscreen and off, but when Doctor Who does make its likely Christmas 2016 return (notwithstanding this year’s River Song yuletide romp) it’s to be hoped that more lessons have been learned than just letting a controller with a clear case of anathema schedule the timeslot.  It’s a real shame that Doctor Who is now coughing out greatness in fits and starts, rather than cruising on the well-oiled carburettor of years past.  This year has seen levels of fan-pandering plotlines to make even JN-T’s Hawaiian shirts lose their shine, and beyond casting a bona fide household name as the new companion for series ten (Miranda Hart, irrespective of your particular tolerance for her, would certainly fit that bill) it’s really hard right now to see what hook can be cast to bring back those casual viewers so crucially lost this term.  Capaldi himself will likely move on after one more year at the age of 58, and with Moffat’s seat on the throne seemingly on a rolling basis until someone (anyone?) comes along to relieve him, the future of Doctor Who as a cash-cow franchise remains secure.  But as a vibrant, essential part at the heart of the Saturday night schedules?  It’s gonna take more than recasting the leads to bring fresh impetus now.  And that’s one prophecy I fear contains very little room for ambiguity...