The Best of This Way Up

Articles, features and episode guides from the archives of This Way Up are collected together in a unique volume. 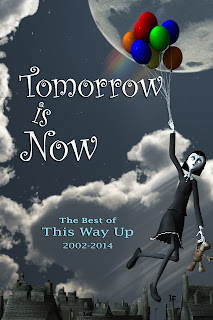 Excerpts after the break....
Excerpts from Tomorrow Is Now


In February 2009, a large independent record shop in Nottingham announced that it was closing its doors and offered a stark explanation as to the reason. The usual arguments debated endlessly over the past few years have revolved around the way that music is purchased; the assumption of the music industry being that if a way could be found to persuade / force people to pay for internet delivered music that would be the answer to declining cd sales and illegal downloading. However it seems the issue has evolved; at least as far as the Nottingham retailer was concerned. They claimed that people under 25 no longer wish to own music, regardless of whether it’s free or not. They simply want to be able to access it which nowadays is very easy what with 3G phones and so forth. As if the death knell for the traditional music delivery systems were not tolling loudly enough, the arrival the same month of Spotify, a site where you can listen free to something before deciding to buy, surely made those bells chime very loudly in every nook and cranny of the traditional music industry. It’s now surely the world’s most un- provable yet certain fact that within a decade there will be no high street music or film retailers; can we now add that nobody will own music?

It's hardly surprising that the big-screen adventures of The Beatles have been ever so slightly overshadowed by their achievements in other fields. What is surprising, though, is that their cinematic careers are rarely celebrated at all. The films that they made in the 1960s, and A Hard Day's Night in particular, are way above the usual level of rush-produced cash-in 'rock movies', shot through with surrealist wit and psychedelic whimsy, and boasting performances so impressive that even the notoriously sniffy Halliwell's Film Guide felt moved to praise the acting ability of the Fab Four. Their post-Beatles forays into the movie business were more of a mixed bag - ranging from Paul McCartney's strangely compelling 'stolen album' fantasy Give My Regards To Broad Street, through the weird art films John Lennon made with Yoko Ono, to Ringo Starr's oft-forgotten spell as the star of a string of erratically brilliant movies including 200 Motels, That'll Be The Day and The Magic Christian - but with no small irony it was the 'Quiet One' who had the most significant impact on the industry.

Alien certainly made its mark. Starting out as an inverted take on John Carpenter’s cult space comedy Dark Star, Starbeast, as it was originally called, would go through a variety of refining processes during its gestation and rebirth as Alien. Dan O’Bannon, performer and writer on the aforementioned slacker hit, began work on the script following the disharmonious end to his relationship with Dark Star director Carpenter. Inspired by stories of World War II bombers attacked by gremlins, O’Bannon wrote the first half of a story concerning the hypothetical invasion by alien beings of a B-52. At this point a period of writer’s block resulted in the embryonic Alien temporarily grinding to a halt - and it would take the arrival of friend and writing compatriot Ronald Shusett to capitalise on O’Bannon’s suspenseful first act. Once complete - and despite later revisions and additions from names including director Walter Hill and producer David Giler - O’Bannon and Shusett’s combined two-act template of build-up and resolution would provide the backbone of the film’s success. And an important name-change to Alien would seal the script’s maturation from pipedream to bona-fide screenplay.

Nostalgia, as wags are so fond of reminding us, ain't what it used to be. But sometimes it isn't what it's going to be either. Way back in 1986, BBC Video accidentally rewrote the 'rules' of home video (which apparently had something to do with all releases being something that nobody would want to buy at a price that nobody would be able to afford) when they put out a compilation of their ancient Watch With Mother children's shows at a virtually unprecedented budget price. It seems nobody had quite anticipated just how nostalgic those who watched the shows as children would be feeling a couple of decades later, as the video sold out several times in the run up to Christmas, with the struggle to keep up with demand making national headlines. After many years of being quietly forgotten about, Andy Pandy and his pals were back with a visibly-stringed vengeance.

Drama aimed at a younger audience is something of a different proposition to what would broadly be described as children’s programmes. The very best of the former can still be watched today and some of it is certainly well enough written and made to transcend its intended audience and simply be called `good television drama`. In This Way Up in the past we have discovered the exceptionally high quality of series like The Ghosts of Motley Hall, The Feathered Serpent and Children of the Stones but these date from the 1970s the so called golden age of drama aimed at younger viewers. Finding a gem of similar distinction in the late 1960s is indeed a surprise but Tom Grattan’s War is certainly the equal of those classic 1970s and 80s series often mentioned.

If the story of The Comic Strip Presents... starts anywhere, it starts with a very exasperated theatre manager. Early in 1979, with his enthusiasm fired by his discovery of standup comedy clubs on a recent visit to America, promoter Peter Rosengard set his sights on opening a similar establishment in London. Rosengard's primary aim was to provide an outlet for provocative, energetic comedy that mirrored Stateside trends, but actually finding the requisite talent was another matter. At first he was simply deluged with boorish dinner-jacketed club comics peddling a tired line in sexist and racist wisecracks and proud boasts of string of cruise liner bookings, and while some suitable performers like Lee Cornes did emerge from the early auditions, the opening date for The Comedy Store was looming close and there weren't enough acts to fill it. Then one day, a burly Northerner walked in; he'd seen an advert that had been judiciously placed in the satirical magazine Private Eye, and launched into a volatile monologue about a violent incident in a cake shop. Rosengard offered Alexei Sayle the compere's job on the spot.

A master class in script writing and studio acting, The Ghosts of Motley Hall has been hidden away in children’s television history behind the outwardly similar BBC series Rentaghost for far too long. It’s time for that to change though, because the ITV series is infinitely superior in every respect. Motley Hall delights in rich language and revels in its own world of ghosts who are only human after all; it pivots gracefully on tiny plots weaving them brilliantly into 25 minutes of character interaction and fun. Where Rentaghost goes for the cheap panto laugh and slapstick every time, Motley Hall will delight you with wit, energy and even drama. It’s a shame that it hasn’t been acknowledged because at the time the series was incredibly popular, being nominated for a BAFTA award and twice winning “junior TV Times” `Look In`s readers award for favourite series. Perhaps with all the episodes now available on DVD this will change and the true worth of the show will be recognised.

There are many reasons why a television series may languish in obscurity, perhaps the primary one being that it simply does not merit any interest. However, this is not the case with ABC’s 1962 anthology Out of this World, which suffers due to two factors independent of the programme itself. Only one episode is known to exist, leaving little scope for re-evaluation, and the series has long been overshadowed by its celebrated longer-running BBC cousin Out of the Unknown. Yet, the briefest perusal of even the most cursory of episode guides suggests that Out of this World is not just worthy of attention as a curiosity, but as an original and successful series in its own right.

There is of course absolutely no proof that anyone in 2001 said `Let’s do a show that combines the gravitas of The X Files and the monsters of Buffy headed up by a character not unlike a certain Time Lord` but that’s really the sort of hybrid Strange appears to be at first sight. Closer inspection though reveals it to be a much more sophisticated show than simply being an amalgam of other successes. It has a craftsman’s touch lacking in its early 2000s contemporaries and a potentially enormous storytelling canvas located at the point where magic, science and religion clash, a heady area indeed. Only seven episodes were made – a pilot and one six part series- and they seem slightly cautious and at first restricted by the locale but by the end of the series you can easily imagine that expanding. Strange was never going to be a ratings busting family show but scheduled properly – it occupied a Saturday night schedule that ill- suited its brooding mood - and given the opportunity to build on its foundations, it could have been memorable. For those who appreciate it’s richness it has been frustrating to watch the likes of Torchwood and Primeval struggle to find storylines of substance and mystery to match their slick visual motifs and high concepts. Strange strove to be something different, something unique and it nearly achieves it.