So, since the last available episode this happened.. 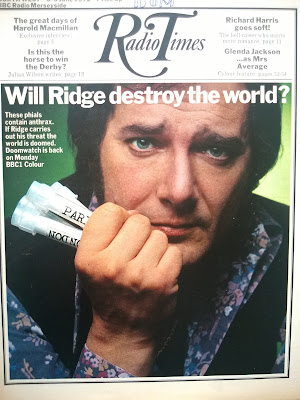 John Ridge went crazy and threatened world powers with a phial of anthrax, was sacked and is now in a psychiatric hospital. Both Fay and Hardcastle have vanished. Colin now gets out a lot more and Dr Quist has got married to Dr Tarrant and moved to the country. There are government spies in Doomwatch as well. It must be something in the water, or perhaps the petrol fumes?


Apparently most of season three, of which this is the fourth episode, was wiped during the BBC’s unbelievable decision to destroy all their best programmes and the copy I saw was taped back in the 90s. The series appears to have adopted what was in 1972 a far less common approach and is running plots across the season, however with so many missing this also means the ones we can watch don’t make as much sense. So there are references to events we’ve not seen and the whole Ridge outburst is here diagnosed as over exposure to lead fumes during his favoured pastime of…welding, I mean who welds in their spare time? Certainly not someone like Ridge who would go to such extremes to save the planet.
The episode tries to link everything to petrol pollution but the plots are so disparate that it doesn’t really ring true. It sometimes plays like about three episodes edited together. Quist’s new countryside existence makes some sense I suppose but the character has become so avuncular just three episodes after his great speech in `Public Enemy`. It also makes for duller television; the first five post title minutes are taken up by small talk as he and his wife relax on a Sunday. Maybe he needs to take up welding as well!
The episode is saved from being boring by John Barron whose Minster remains a booming presence. He didn’t get where he is today by welding that’s for sure.

Hair Trigger
The issue of rehabilitation of violent offenders is the theme to this stylishly presented episode from the pen of Brian Hayles. Directed with something of a flourish  by Quentin Lawrence the story centres around the work of Doctor McEwan who uses transmitters to regulate behaviour. Effectively a “pleasure substitute” the idea is to quicken the return of the prisoners to a meaningful existence. Admittedly Hayles’s story has lots of melodramatic twists notably the use of a multiple murderer  called Beavis in a trial when someone slightly less dangerous might have been more sensible. He also fashions a climax which essentially repeats aspects of the original crime. Nonetheless the story raises issues that, as with many a Doomwatch episode, remain political hot potatoes to this day.
Quist becomes involved thanks to his wife’s interest in and somewhat less than enthusiastic response to the work and there is much meat in the arguments for and against. Are they creating what are virtually robots or giving people a fresh start? I felt there was a weakness in the idea in that anyone seemed to be a viable subject for this treatment and Hayles seems to assume the viewer’s sympathies will lie with Beavis because Dr Tarrant takes an interest in him without really laying out anything much about the seriousness of his original crime. This may be suggesting that everyone deserves a second chance however heinous a crime they have committed but it’s not really said.
Another first rate cast rises to the occasion especially Michael Hawkins in his second role in the series who gives a measured believability to Beavis. Quentin Lawrence’s direction is excellent too creating a sense of foreboding right from the opening shot of the austere exterior of the institution to a final bleak showdown In an isolated country cottage.