Farewell Then, Arfur and 'Ar Cilla


Words on Cilla Black and George Cole
Two giants of classic tv died this week and yet I have barely seen any of their most acclaimed work. Not because I was snubbing them or anything, just that neither Blind Date nor Surprise, Surprise were the sort of shows I’d watch and I never saw Minder either. Yet both did do other things that I’ve always liked. 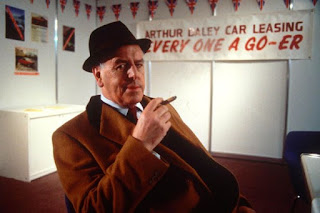 Cilla’s Sixties singles are quality. By selecting the best songs she could find and using George Martin as producer she was able to showcase her hard but expressive voice to maximum effect. Her version of `Anyone Who Had A Heart` is one of the best singles of the Sixties.

Cilla belts it out live in the Sixties

Towards the end of his career I saw George Cole in a sitcom called Dad which mined that renowned comedic area of the differences between generations. Cole was superb; with just a twinkly comment or a sly look he stole many a scene. It’s a shame the series was never released – it was scheduled a few years back but pulled- because it is his performance that anchors it and is well worth watching. Some of it is on YouTube. I have very dim memories of the comedy drams Don’t Forget to Write` in which he played a struggling author. Also even further back they always used to show those old St Trinians films in tye school holidays and I remember his lively performance as wheeler dealer Flash Harry.
What both had in common is that they seem to be untrained, ordinary people who became tv icons. Their personality became their trademark and the public liked them. They felt reassuring, the sort of people you might actually know in real life. They were still giving a performance yet one that drew on their more magnetic, interesting properties. They had that elusive star quality that sometimes comes from the ordinary rather than the fantastical.
Posted by John Connors at 22:47