Here's a small mystery. The clips used for the top of the show previews of Brian Ferry, Hot Chocolate, The Gibson Brothers, and Bad Manners are from old episodes of Top of the Pops; not tonight's show. Why would they do that? Ordering up old episodes from the archives in order to transfer a single short clip must be more time consuming than building the preview as the programme is edited. On closer inspection it also turns out the clip of Kelly Marie and her dancers is from tonight's show, but the one of Sheena Easton is not from Top of the Pops. What's going on? It looks as if they built the preview in advance -as much as possible- and got Peter Powell to do his voice over live in the studio. 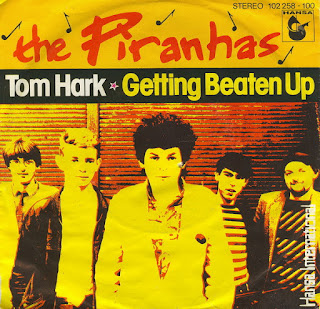 The Piranhas: Tom Hark [26]. A classic first performance from a band. The lead singer of The Piranhas looks slightly shell-shocked, and forgets to pretend to play his penny whistle at the start of the song. What can have unnerved him? Could it be the sight of the drummer stripped to the waist (the top half) and lightly greased (known in the trades as a half-Bryan), and playing his drums with a pair of fish(Bream). You know, I think it could. The band are doing some good comedy business on stage, at one point the two guitarists lean in and do some comedy hand waving during the "you have to laugh or else you cry," bit but the camera operator, vision mixer, and director are all to obsessed with the drummer to spoil their wide tracking shot. As the song ends a caption repeats on screen "No. 26 THE PIRANHAS". The captions are probably generated from a machine called a Ryley, like the one seen here towards the end of a clip from Swap Shop operated by a man who appears visibly terrified by the presence of Noel Edmonds. 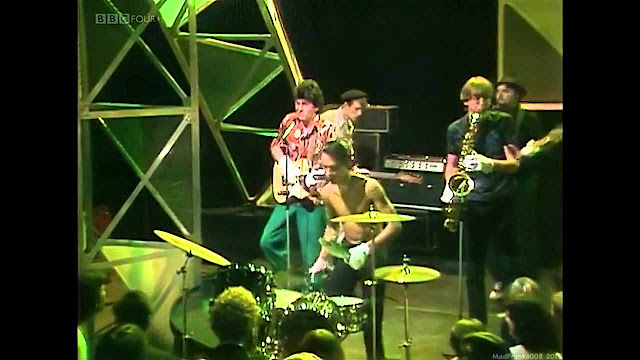 Diana Ross: Upside Down [2]. The limitations of the dual presenter format become rapidly apparent when Peter Powell and Elton John have to banter between songs. "I tried to kill of disco," lies Elton John as he introduces Diana Ross. No one cares what Elton John thinks, if they did they would have brought his album A Victim Of Love. The promo film for Upside Down is  an artless mixture of clips and still photos of Diana Ross.


Roxy Music: Oh Yeah (On The Radio) [9]. "Good to see Bryan Ferry looking better," says Peter Powell at the end of the song, referring to the kidney infection which hospitalised him in July 1980. Elton John has disappeared.


Tom Browne: Funkin' For Jamaica [16]. Legs & Co survived the lean weeks of the Musician's Union strike and now they're back, funkin' around in an unpleasant selection of corsetry. The caption generator is pressed into service to name those responsible. Pauline, Gill, Sue, Patti, Lulu, Rosie. You have been found guilty by a jury of your peers of crimes against dance. You shall be taken from this place to a podium where you shall unconvincingly mime being hung by the neck until dead.


Hot Chocolate: Are You Getting Enough Of What Makes You Happy [21]. Still no sign of Elton John as Peter Powell launches into another change to the format; the chart from numbers thirty to twenty one. This is a change that works. Breaking the chart up gives a little more attention to songs which might otherwise have slipped past in the complete top thirty countdown which used to start the programme; Yellow Magic Orchestra, Theme From The Invaders at 27, not as I thought a cover of the theme music to the old tv series The Invaders; Joy Division at 22 with Love Will Tear Us Apart.


Kelly Marie: Feels Like I'm In Love [29]. Kelly Marie's enthusiastic dancers are only a thin lycra sheen away from a public nudity charge. Where has Elton John got to?
The Gap Band: Oops Upside Your Head [29]. Here he is. Now wearing a green leather coat and red shirt. Had he got changed and was caught sneaking off home by the floor manager? The footage of The Gap Band in concert is astonishingly poor. It looks like a second generation VHS copy of pirated Super 8 film. In the crowd shots someone keeps waiving a walking stick. Have they mistaken The Gap Band for a religious revival meeting, and theywant to show that they have been miraculously healed?
The Gibson Brothers: Marianna [14]. The big show-piece demonstration of the new look Top of the Pops. The Gibson Brothers have been dropped in the middle of the audience, and the studio lights are turned up so that we can get a good look at the scale of the crowd and the new studio set. And balloons. Lots and lots of balloons. Elton's gorn orf again.

"What was happening while we were away?" Asks Peter Powell rhetorically before launching into a potted summary of the last two months music. Legs & Co wiggling to Odyssey and Use It Up And Wear It Out. Olivia Newton-John & Electric Light Orchestra, Xanadu; sadly we missed the roller skating antics of this song but given the promo is nothing but film clips from the Olivia Newton-John bomb BBC4 would probably have edited it out anyway. Don McLean and his wig, number one for three weeks. Glad we missed that. Thanks Musician's Union: thunion.

Sheena Easton: 9 to 5 [5]. Compare and contrast this with poor Lena Zavaroni and her diabolical Jump Down Jimmy Jump from the last pre-strike show. 9 to 5 is navigating the same light entertainment waters as Jump Down Jimmy Jump but it sounds fresher and more up to date. Sheena Easton obviously had better people managing her career. Bad Manners: Lip Up Fatty [15]. A perfectly launched balloon bounces off the top of Buster Bloodvessel's head. Don't madden him! He's perfectly placid until provoked.

"So good manners would be to let you know what's happening with the new top ten!" Good manners! Peter, you sly word dog you. Then it's the top ten.


Number one: Abba, The Winner Takes It All. ABBA don't do Top of the Pops so they've sent the promo film. Luckily it's really good. The mournful piano at the start accompanies a black and white montage of photos of the group in happier days and then as the lyrics start we cut to a washed out  Agnetha Fältskog. "I don't wanna talk. About things we've gone through." Towards the end of the film ABBA's structure as a quartet works against them. To show Agnetha Fältskog as the loser -who has to fall- we see shots of the other three having a fine old time, and it gives the impression that  Agnetha has divorced the entire group.


Closing titles: George Benson, Give Me The Night [10]. Top of the Pops ends with a plug for Elton's Johns next flop record, it peaked at 44. Then the crowd invades the stage and starts dancing in a sequence which could have used a little more rehearsal. It's meant to look like a seamless transition into the closing titles but the audience rushes forwards as Give Me The Night starts playing and Elton John and Peter Powell are edged off the podium. One of them give an audible "augh" as they leave the shot. It's probably meant to be a joke but you can also hear two people off camera urgently saying "stay there" to the advancing hordes. The final crane shot is meant to show off the new Top of the Pops studio in all its glory but the shot is too wide and high, and ends up looking under whelming. The wide shots during The Gibson Brothers performance did a much better job of selling the scale of the crowd.


Performance of the week: The Piranhas: Tom Hark.