In the case of NME it sensibly stopped focussing on news in its magazine ages ago leaving that to the website. When you stop and consider it makes sense for everything to be on there; they can still have reviews of gigs and new music only you can include clips of them as well. Then again will this gradually diminish the art of reviewing? If you can watch or listen to something then you make up your own mind about it; why bother to read someone else’s opinion however informed it might be? I have to say though that people do still pay heed to reviews. Even nowadays a buzz can be created by some positive reviews.
The wider issue as far as NME is concerned is the way that music has become more of an establishment thing nowadays. Once in a while someone comes along attempting to be outrageous but because of the way 24 hour media works people tire of such antics far more quickly and usually the music is not there to back up the image.
People also tend to listen to music while doing something else which is not how it used to be. There was a time when music fans would sit and listen to a new album to the exclusion of anything else soaking up every note whilst reading the lyrics. This doesn’t happen much anymore so we pay less attention to the music we listen to. Case in point- as I type this I have some music on in the background but I’m not really listening to it properly.
Also while some teenagers are still influenced by particular music genres it doesn’t seem to have the same widescreen importance to their lives as it did. In decades gone, young people’s lifestyle was dominated by music whether it was teenage girls (the famed `screamagers`) following a pop group or indie kids following bands round the country (not literally all the time) and dressing like them. Such things now seem to be part of a wider landscape but no longer the defining theme of teenage life. 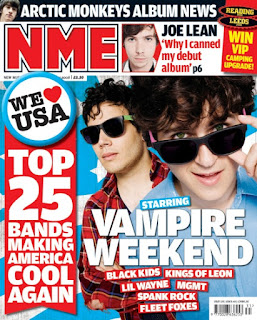 Music papers were a part of all that of course which is why their influence was waning before the decline of print media. There was a time when a handful of journalists could bunch a cadre of similar artists together and sell a concept to young readers. True, many of these never made it beyond the confines of those readers but notable musical landmarks like punk, New Wave or grunge might never have gained such international traction without the music press to propel them.
NME only survived this far as a brand because it proved surprisingly adaptable. It was there at the start championing beat groups in the 1960s, had its most influential period as an indie alternative to the pop mags and rock mags in the 70s and 80s and more recently adapted to the iTunes generation who like “all kinds of music”.
Now music is one big thing available through all kinds of channels and it has drained the NME of relevance. The fact that lately the paper has featured exactly the same acts as you might see on the cover of Mojo or inside The Guardian has probably not helped to distinguish it from the others.
On a personal note it was music journalism that first inspired me to write stuff albeit on non music subjects and I do miss the personality led writing that built the music press’ greatest days. Yet in the Selfie Age where the opinions people value above all others are their own there is no place for the likes of NME. Even so you have to commend the fact that it’s still knocking about.