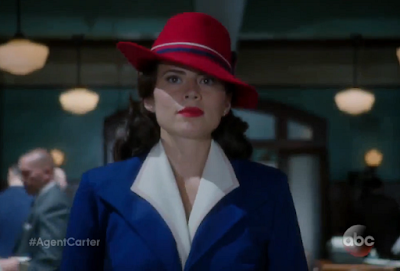 The plot is that inventor Howard Stark (father to be of Tony Stark aka Iron Man) has been robbed of some dangerous weapons he’s been working on. Rather inexplicably he has vanished leading the authorities to believe he’s turned traitor and is now flogging the weapons to the highest bidder. Even less believably this is splashed across the newspapers despite being apparently top secret. Stark turns up to persuade Peggy to get the most dangerous weapon back..
The feel is very much old style pulp comic adventure right down to the sparing use of colours – particularly in a diner Peggy frequents- and 1940s style; the distinctive hat Peggy sports. Likewise the dialogue is snappy, shows flashes of wit but never strays into complexity/ As we know agents don’t make small talk so it’s all clipped stuff, presumably later episodes will allow us some insight into a group who come across initially as generic hard- nosed government agents and little else.. The flatmate seems to be a lively, more human addition but unfortunately she is killed after a handful of scenes.
The McGuffin is some kind of liquid bomb and the episode only really sparks into life when Peggy and Stark’s uptight butler Jarvis (check the name) are fleeing having got it back. They form a promising double act, kind of an old TV Avengers dynamic though in this case she is the dominant character. James D’Arcy fills the reserved subservient shoes very well. In the lead role Hayley Attwell is comfortable with just the right mixture of independence and intelligence without alienating the viewer. Her accent though sounds like an American putting on an English accent which is odd as she was born and raised in the UK.
You can see pockets of potential here and it’s always unwise to make too many conclusions on one episode but Agent Carter could be a great addition to the Marvel world, it just needs to build on its strengths.