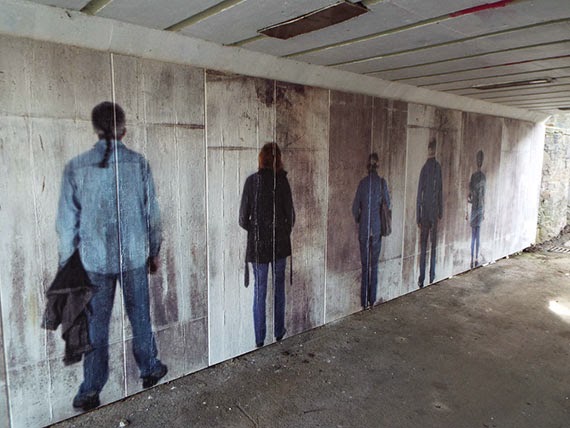 So what do you get if you mix a shrinking Tardis, graffiti, missing people and monsters that live in a  two dimensional world? The answer is an episode perfectly suited to director Douglas McKinnon and one that will provide a generation of fans with moments they will always recall just like “the one with the scarecrows” or “the Sea Devils coming out of the sea”. The monsters emerging in the tunnel is a brilliant example of that and the effect seems to revisit an old technique mixing animation with live action which was first seen in things like A-ha’s classic video Take on Me. It’s one of those tricks that will never get old though and as they lurch forward, layers peeling and re-assembling images of the dead person it is stunning to watch. Other visual treats include a whole mural of paintings turn around and a thrilling sequence when a train is barrelling towards a rather tiny Tardis.
Yep, the whole shrunken time machine thing could have been a gimmick but instead it becomes a genius idea. Apparently thought of on the hoof when the production team wanted an episode in which they could film most of Peter Capaldi’s scenes in one place, the idea toys with the dimensions in a more satisfying way than all those time based tales of recent years and makes sense in this particular story.
Stuck inside, his head glaring through miniature doors barely larger than his face the Doctor has to leave the leg work to Clara. As last week too, they both have to work out what’s going on with the rest of us and pleasingly his results are inconclusive. We never find out what these monsters are really about and that makes a refreshing change. For a while there with Matt Smith’s Doctor it seemed like the character knew everything and had little fear or ignorance; with this Doctor we see him think and work things out. 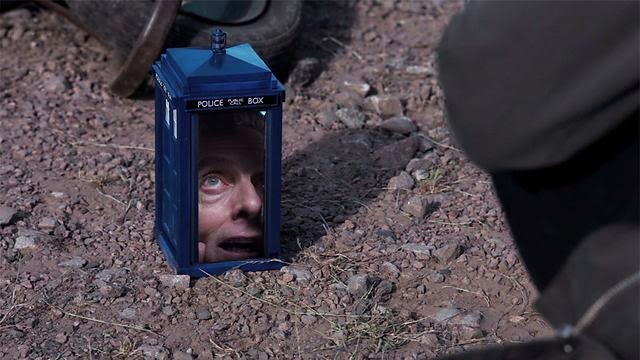 Mathieson does not shirk the gruesome side to the story from the opening scene of a man being squashed into his wall to the ruthless way the creatures pick off the characters. He offers a mixture of lively exposition and some nasty descriptions especially the idea of the aliens wearing dead people. It is Clara who sort it out in yet another sterling performance from Jenna Coleman. There’s plenty of humour too; the interactions between the Doctor and Clara are full of vibrancy plus there’s a great Addams Family gag.
The narrative seems well thought through with a general theme of perception and perspective from the shrinking Tardis, psychic paper not working, the fact that the people in the wall might be modern art and the final solution in which Rigsy rustles up a picture (rather hastily) to fool the aliens. There is something about this year’s episodes which, even though they are the same length as usual seem to contain more of substance. You can feel the threat- this partly due to Douglas McKinnon’s direction- every step of the way.
The community service bods could be a little more rounded, for example by explaining a little of sneery Fenton’s backstory we might see him as more than the annoying one. Some of the others seemed rather less terrified or even curious than they might do. No complaints though about Jovian Wade’s Rigsy written and played with enough depth and conviction so as to skirt most of the clichés. How many other viewers felt he might work as a companion at least for a couple of episodes more?
Remarkably there has not been one episode this season that I’ve not thoroughly enjoyed but this one, along with` Listen`, is the most gripping and unexpected. If the series can continue in this direction it will be producing some of the best material to come out under the Doctor Who banner.
Posted by John Connors at 19:51