Stuck in a Lift

aka Trapped in an Elevator. It’s a film cliché- but what if it comes true?

We’ve all seen films or tv shows where characters are stuck in a lift and certain assumptions result. When it actually happens though, the results are less dramatic and more mundane as I discovered travelling up to the fifth floor of an office building recently. From the start it seemed to me there was something about the lift that suggested maintenance was not a priority in this building. The doors rattled when they slammed shut, the lift was small enough for more than three people to make it seem crowded and there was a discernible shudder when it moved off from the ground floor. Then, somewhere between the third and fourth floor, it came to a halt.

The doors rattled open to reveal the floor at roughly my eye level so the first potential escape route was blocked. I’m not large but I would have  needed to be wafer thin to have a chance of crawling through the narrow space. The doors closed again having tantalised me with that view and I imagined we’d move off but nothing happened. I pressed the button again with no result so I did that useless thing that people do by pressing the button again and again which clearly was not going to do anything. I was alone in the lift- in fact I could touch both sides of the compartment which meant there was no danger of the air running out any time. Plus I was reassured by the fact that all lifts have an escape door of some kind in the roof don’t they?
In every film I’ve seen where characters need to get out of lifts there is such a door- or indeed a hatch- to facilitate such an escape. Yet looking up it became clear this one did not share this attribute. So there was to be no clambering out and skinning up ropes pursued by screaming giant bats. I might be making up the giant bats. Perhaps a special services rescue force had been scrambled and would cut through the metal to rescue me? Or perhaps not.
The only option then was to press the emergency button which would patch me through to reception. It took several goes until somebody answered to inform me that the porter would come and rescue me but it might take "a few minutes" because it was lunchtime.
Now when people say "a few minutes" they do not mean two minutes which is what "a few minutes" actually means. What they mean is any time between 10 and 30 minutes.  A "few" is a measure that has evolved to mean a shorter period than “a bit” but longer than “a sec” or “a tick”.
Languishing in my metal prison I started to wonder what could happen. Perhaps zombies had started to climb the ropes? It was, after all, lunchtime. Maybe those ropes were worn down by decades of movement and fraying by the minute meaning the lift would suddenly lurch sideways or, worse, plummet to the ground. There is, I have since discovered, no point in trying to jump into the air at the moment of impact because you will in fact smash your head into the ceiling of the lift.
The doors seemed to have edged themselves slightly open and people occasionally would wander past seemingly not noticing the peculiar gap underneath the floor. I could only see their shoes and resisted the urge to yell at them to save me. Eventually the porter turned up presumably having stopped to eat a sizeable lunch in the 20 minutes that had passed and after some jiggery pokery managed to get the lift up to the next floor where I was able to emerge. Of course I assured him it was fine, no problem, I hadn’t really been on the brink of being attacked by giant bats or zombies.  What I wanted to say was; “Why have you taken so long- was it too much trouble to put down your ham and cheese roll and come and rescue me from the giant bats and zombies?”
Oh and before you ask, no there was no phone signal in the lift so at least something was like it is in the movies. 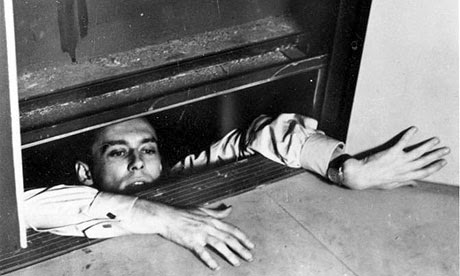 Email ThisBlogThis!Share to TwitterShare to FacebookShare to Pinterest
Labels: Misc, Stuck in a Lift. Trapped in an Elevator