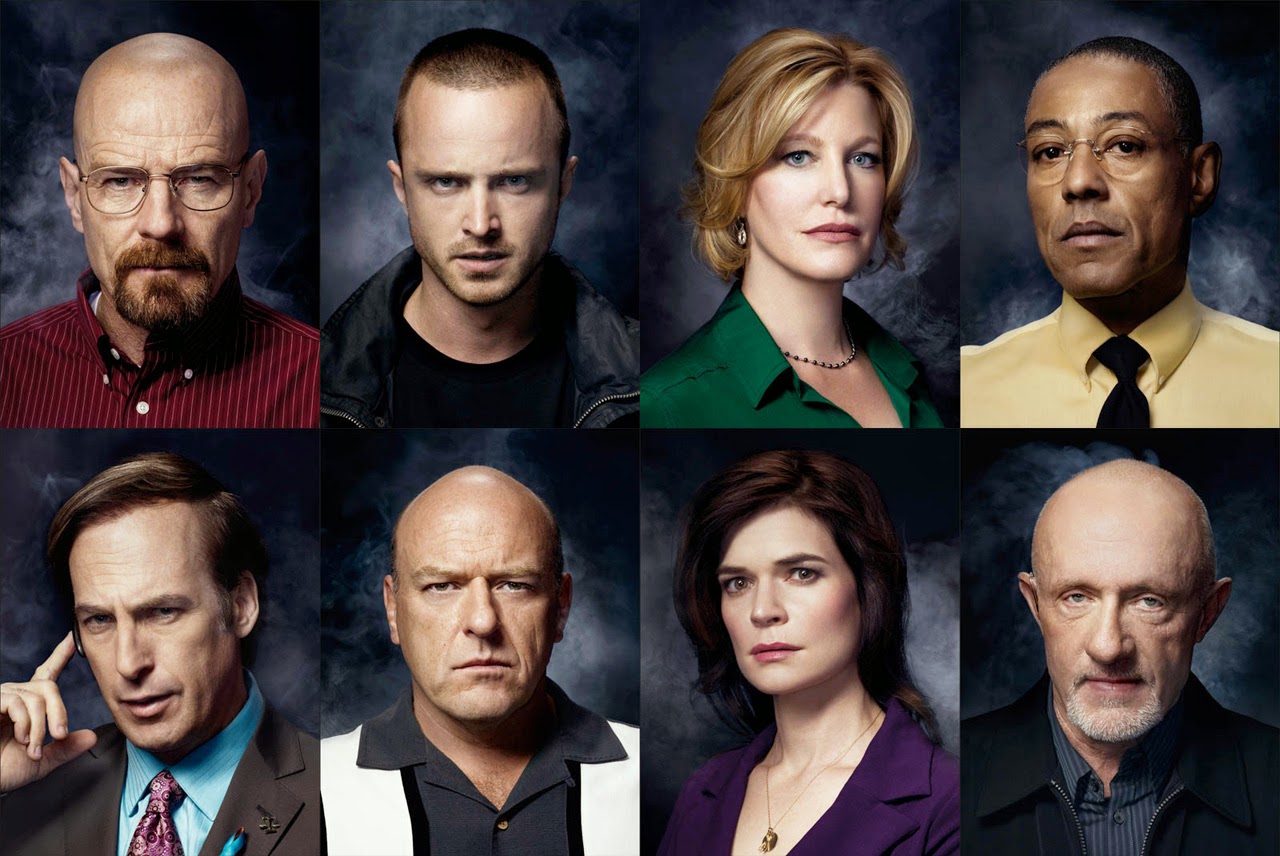 A while back there was a car advert in which all the separate components of the vehicle had been extracted and laid out as a work of art. Watching Breaking Bad- especially this fourth season -reminded me of that advert because everything slots into place so perfectly.  It is a master class in how to write an ongoing TV drama that is rich with character and in which each storyline fits together with the others, not always instantly but eventually. There isn’t an centimetre of waste in these 13 episodes, every single scene fits necessarily into the larger picture so any review can only scratch the surface of what is going on. There are people who have tried the show and given up; the shortest time I heard was someone turning off half way through the very first episode! Others have reached seasons 3 or 4 and found the whole thing too heavy. There is, they say, no light and shade in the show, it’s all hate and no love. In one way this might be true yet ultimately it is a series about drugs and guns and cartels while also being one about family and trust and deceit. It’s central premise in case we forget is an ordinary man faced with mortality making some bad choices and finding a thrill to criminal life that he never had in his previous ordinary one.

Warning - Big Breaking Bad Spoilers past this point
The other thing about this show is that it has scenes that people talk about for ages afterwards. One such scene turns up almost right away at the start of the fourth season. With Gale lying stone cold dead both Walt and Jess’s life expectancy might just be measured in minutes when Gus arrives at the lab. Without any emotion at all he fetches a Stanley knife from a drawer, changes into overalls and pointedly ignores all of Walt’s reasoned yet increasingly frantic explanations as to what happened. Then, and this is still without him having said a word, he slits the throat of one of his henchman who had been spotted at the crime scene.  This scene demonstrates a few things. One is that sometimes characters in other TV shows just talk far too much, especially if they are villains. The second is that the viewer actually knows neither Walt not Jesse will die because even avoiding spoilers it’s not possible to avoid knowing they are in season five. Thirdly it shows the viewer just how immersed in this world they are. About half way through I realised how the scene was going to play out and sure Enough it did (even to the point where when Gus is leaving he says his only line in the entire scene telling Walt and Jesse to get back to work). If this happened with most series it would be a little disappointing once the smugness of second guessing correctly was satisfied. Yet here it took nothing from the sheer power of what was happening; it was still as riveting and shocking as if I hadn’t guessed. I suppose it means I’m now truly in the Breaking Bad zone.
That example aside I rarely am able to predict what the show will do next and that is a good thing. Season Four seems to begin in an even more taut position that its predecessor but whereas that was mostly danger headed inexorably towards our two cooks, season four seems to be about the danger from within and how they can do some second guessing of their own. Walt knows Gus will kill them sooner or later so buys a gun with the aim of killing his serenely vicious boss (Giancarlo Esposito, excellent throughout) only to be informed he will never meet him again. So he drives to his house one night, dons the Heisenberg hat intending to do the deed there only for his phone to ring when he’s half way across the street and Gus telling him to turn round and go home.  Next he tries to rope Mike into his plans in a meeting in a dusty bar and ends up being beaten up. This is a masterful cat and mouse game that plays on Walt’s mind so much he can barely be bothered to invest time in Skylar’s plans to wrestle ownership of the car wash as a method to launder all the money.
Skylar is becoming more like Walt this season it seems; her negotiating tactics failed she resorts to Saul Goodman assisted trickery much to Walt’s consternation. There’s a great look that Saul throws Walt when he starts to lecture Skylar on the ethics of what she’s suggesting. Yet you can see that she too is being drawn into the criminal world, however disapprovingly she has viewed such matters in past seasons. Later on she resorts to even shadier tactics to try and absolve herself from being implicated in old boss Ted Beneke‘s cooked books.
Jesse on the other hand has been numbed by his act of killing Gale. This is a character who has always shied away from face to face violence in the past; it is Walt who has always done such deals. Jesse tries to block his trauma with endless parties and even go kart racing but nothing can quite blot it out. Though never quite as taciturn as Gus, Jesse does spend the first three episodes of the seasons saying much less than before and Aaron Paul is able to convey this so well with the assistance of some interesting camera tricks.  Even later in the season when Jesse is involved in a shootout the camera presents his firing differently to everyone else as if trying to show us the impact it makes on him. By the end of the season Jesse has become far more the character we can identify with than Walt.
Jesse’s mood is diverted when he is sent to accompany Gus’ chief fixer Mike on a series of tasks retrieving money and observing potential rivals. This development wrong foots both the viewer and Walt who assumes that his lab partner is being escorted to his death. Instead it sets up a surprisingly amusing series of sequences that resemble a less verbose version of the original dynamic between Walt and Jesse. Instead of engaging in argument, Mike tends to remain silent as Jesse babbles on inaccurately surmising what is happening. The whole thing is a set up by Gus to drive a wedge between Walt and Jesse; left alone to cook the former finds the going tough but every measure he takes to show defiance backfires in one way or another. So the Mike / Jesse escapades become enjoyable sojourns for us; especially thanks to Jonathan Banks’ marvellous knack of responding to Jesse’s utterances with a pained look of disinterest. As matters progress though you start to sense some sort of respect developing from Mike for the younger man whose unusual ideas and boldness does seem to get results. Whatever the destination this could be a great sitcom idea!