What Remains (episodes 3 and 4)

Compelling to the end, What Remains is an exercise in building tension and atmosphere before letting it all out in a frantic final sequence. Though spread across four episodes, the drama has the feel of a film about it. The measured camera work, creepy sound effects, insistent unsettling incidental music as well as characters that don’t waste words all add to the filmic feel. Director Coky Giedroyc excels in finding those unusual corners of the building, her cameras crawling around as if we are in a horror film. The result is something that may perhaps lose its grasp of reality somewhere during the last half hour but remains riveting till the last frame.
The third episode starts to make more implicit connections between the house’s inhabitants and Melissa as Michael continues his increasing obsession with getting back at Joe Parker for still unspecified incidents from his school days. Two particular suspects step forward. Elaine ends the episode forbidding Peggy to leave the flat as we see the former’s self centredness manifesting itself dangerously. Meanwhile the question remains as to whether Adam is dangerous or simply acting out in retaliation for his father’s previous behaviour. We also see the bad side of Kieran as he gets drunk. Perhaps the father and son have more in common than either would care to admit?

Len Harper’s dogged solo investigations continue with the narrative underlining how loneliness in retirement seems to be driving him on. In some ways this is a familiar detective trope; the job has ruined any personal relationships he may have had – but David Threlfall manages to add something to every scene. He moves as slowly as the cameras and it’s sometimes difficult to see why the case holds onto him so strongly. Is it because it was the last one he was working on before a retirement he clearly hates? 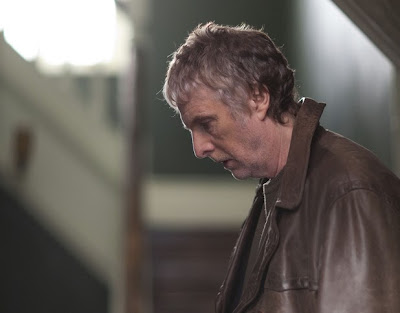 With everyone now positioned as a suspect it should not come as too much of a surprise that episode 4 opens up into a full blooded thriller. When Joe Sellars, whose discovery of Melissa’s body has already been shown in flashback, is arrested after assaulting a pupil and confesses to the murder, we know full well it’s not him because there’s still half an hour to go. Even then Basgallop wrong foots us several times in the last stretch. Oddly enough, Len seems to be sleeping in Melissa’s apartment so is on hand to play his part in the bloodbath that follows. He’s even brought his bow and arrows (why?!) which having been shown each episode comes in handy at the climax.

His final words sum up the loneliness theme of the serial. Each character seems to be imprisoned in this house somehow cowed by secrets, failed relationships, betrayal and in one case madness. It relies on Giedryoc to direct it with panache, so that people sneaking up in the background, the sound of creaking floors and doors are just as significant. The actual identity of the murderer is cleverly obscured till the last possible moment and is worth watching just to see how it pans out.

Amongst a very strong cast Indira Varma stands out in the last episode while David Threlfall’s dogged Harper is an understated triumph throughout. Everyone gets moments to shine though and it is the cast’s navigation of the seemingly simple dialogue that supports what might otherwise seem a far fetched story. Sinuous and threatening, What Remains is as much a mood piece or a parable about being trapped as it is a thriller. Out of such an unlikely brew emerges one of the year’s most absorbing dramas.