We have all experienced moments when you wish you could just go back in time and do or say something different and that’s the prop supporting Richard Curtis’s latest venture. The writer says it’s the last film he’ll direct though it’s only the third he has. Perhaps the bruising experience of The Boat That Rocked has rocked him. Perhaps he wished he could travel back in time and completely re-edit a film whose best bits inexplicably ended up as dvd extras. Perhaps that’s how he came up with this idea. There are swathes of people who will dislike About Time but there’s nothing Richard Curtis can do about, ironically, the times we live in. Times where disparaging the rich or posh remains the last acceptable prejudice. Instead, he can use the admittedly wobbly premise to deliver a movie rich in resonance for viewers of a certain vintage, people whose joi de vivre has not been entirely sucked away and those who feel that a happy ending is surely everyone’s ambition. 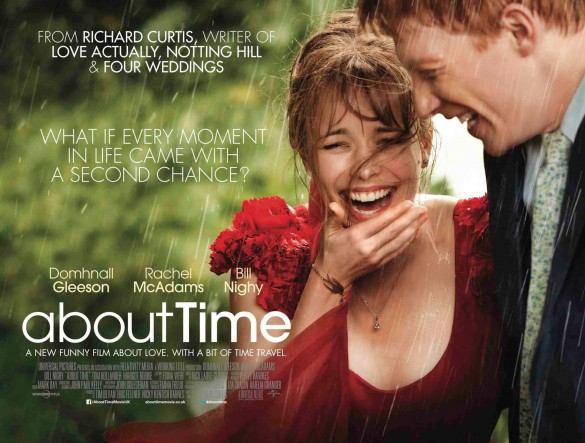 Tim Lake is shocked to discover a family secret related to him by his father in the way that only Bill Nighy can relate things. Males in the family can time travel back through their own lives. Accept this and move on- as indeed Tim soon does- and you’ll enjoy the comedic results. Unlucky and bumbling in a Hugh Grant kind of way (well it is Richard Curtis) Tim soon learns to use his gift to woo and win the heart of sweet American girl Mary whom he meets in a bizarre restaurant where it is completely dark. Logic lovers beware- this is not a movie that feels the need to make complete sense so just as we never discover how the meals are delivered to the right table in such a place neither does Curtis pay particular attention to his own rules. There are several incidences when those familiar with dos and donts of temporal fiction will be asking questions that start with “hang on..if..” Forget those questions. What Curtis has successfully created is an examination of the push and pull between life commitments, balancing family, relationships.

There are two love stories. One between Tim and Mary, the other between father and son. Both are written with enough authenticity to over-ride cynicism. The courtship is beautifully constructed and shows that Curtis can write dialogue that feels like people might actually say it even if they aren’t people from urban backgrounds. You may be surprised to learn that realism is not just about swearing, domestic violence and bitterness. There are people like those who populate Curtis’s films way beyond the confines of Notting Hill or even London.  However it is the love story between Tim and his father that trumps everything else. Clearly written from the heart, it is delivered with a natural chemistry between Bill Nighy and Domhnall Gleeson. Despite few physical similarities the two convince completely as father and son. In portraying a happy childhood and an easy adult friendship Curtis is actually being bolder than the archetypal unhappy ones that pile up in many dramas.
Curtis uses the time travel premise to draw salient observations about choices and the way relationships develop.

There’s much fun to be had as Tim re-lives awkward moments to his advantage and even when the story becomes more serious the tone of the film is not as sugary or emotionally exploitative as you’d imagine it will be though some will find it too sweet. It resides mostly in the realms of light comedy in fact there are more genuinely funny bits here than Curtis has delivered for some time. By the time you reach the bittersweet ending, you feel it’s been earned and it seems positively restrained in a very English way when you consider how an American director would have treated the same story. As a rule Curtis’ visual approach remains unobtrusive allowing the actors to carry the emotional weight which they do perfectly.

The three leads are stand out- this is Bill Nighy’s best performance in some time even if it is full of Nighy-isms. Domhnall Gleeson is terrific juggling both plots with ease and subtlety plus excellent comic timing as well. Rachel McAdams conveys intelligence and lovability in equal measure. Both sets of relationships spark many strong moments. There are great turns too from Tom Hollander as a bad tempered uncle and playwright and Lindsey Duncan as Tim’s stoic, plain spoken mother.

With no special effects at all and any time related anomalies dismissed straight away it’s not a stretch to imagine the film working without the gimmick of time travel. About Time is a little scrappy to be perfect but the overall result is a warm life affirming movie and while the conclusion that we should saviour what we have but not forget how we got here is hardly new it is well worth being reminded of.