The Mortal Instruments: City of Bones


Though superficially exciting, this adaptation of the book by Cassandra Clare is too cluttered and derivative to make a lasting impression. Presumably the production team thought that employing superfast editing, dynamic action and all manner of CGI creatures would be enough to paper over the fact that the story lacks focus though the actors make the best of it. In fact the casting is something of a strong suit with Lily Collins excellent as heroine Clary Fray whose life is turned upside down after she starts involuntarily drawing a strange shape. Turns out this is a sign that she is not the ordinary girl she imagined and before she knows it she and best friend Simon are on the run. They are hurled into a world of Shadow Hunters and demons hidden from all `mundanes` (i.e. everyone else) in modern day New York. She’s told not to trust anybody which is often a forewarning that the narrative will constantly pull the rug from under the viewer’s feet. This can work a treat but if over done as it is here ends up looking too contrived. 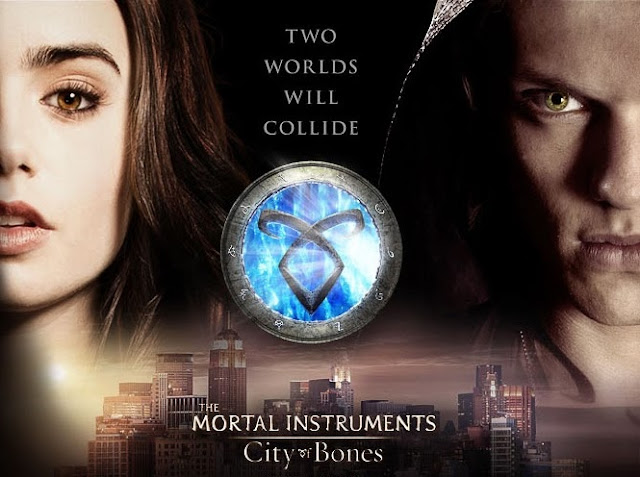 Oddly while the film strains the patience with a never ending series of set pieces that don’t necessarily seem to get us very far, it is also lacking in clarity. There’s plenty of pacy action and a crate load of mythology but what does it all mean for people? Much of the action occurs inside an impressive gothic building that is half cathedral half museum, but this rather isolates the characters from the real world. If the story was better it would also not matter so much that every aspect seems to be taken from another fiction whether Harry Potter, Twilight, Percy Jackson, Buffy the Vampire Slayer and others. So there is literally something here for everyone yet put it all together and it is something of a poor fit.

The opening section is the best as Clary’s home is trashed with considerable brutality and violence and she and Simon are forced on the run with the enigmatic Jace. There’s a pleasing rivalry between the geeky Simon and preening Jace for Clary‘s attentions while the threats they face are genuinely strong. Yet once we delve into the back story and people start talking more like lecturers than characters matters begin to sink. Too many revelations are saved till the end when there are so many different things happening it becomes far less involving.

Lily Collins is terrific giving a performance that convinces whatever is going on and she’s well matched by Robert Sheehan as Simon who adds a sprinkling of cheekiness to the piece. This contrasts perfectly with Jamie Campbell Bower’s self- centred Jace and the three of them keep the film cooking long after the narrative has twisted itself in knots.
The problem lies in not having an antagonist until close to the end so instead of the Big Apple’s populace being threatened by something it is always just our heroes whose lives are in jeopardy. The McGuffin is the Mortal Cup everyone is searching for and while the way its hidden is quite clever, there is something rather amusing about people seriously demanding “give me the cup” all the time like impatient café customers. We also have a portal which serves whatever function the writer wants it to so one minute we’re told that if Clary jumps into it her mind could be scrambled and she’d be lost forever. Fine except later she does just that and ends up exactly where she wanted to go. Then this device is used to trap the villain.

As if the ending isn’t busy enough we have some parental issues surfacing at just the moment when all you want is action. At times the last fifteen minutes seem like clips from three different films rather than the climax of one. It is difficult to see how they inter-relate which is a pity because much of it looks great and there is no doubt director Harold Zwart has a flair for this kind of action. There are the stirrings of a great film lurking and it is often a lot of fun but by the end it’s hard to see what the whole thing has actually been about.
Posted by John Connors at 23:25