The sequel to one of 2010’s best films is inevitably going to be less stunning and Kick Ass 2 contains fewer laughs, surprises and risks than its predecessor. It still packs quite a punch though while the idea remains conceptually rich and visually interesting. The story picks up with both Dave Lizewski and Mandy Macready trying to adjust to regular high school life without their alter egos but still covertly training. When Mindy finally succumbs to the promise she made to her late father to renounce violence Dave seeks out new allies with which to patrol the streets. Meanwhile Chris D`Amico whose villainous father was killed by Kick Ass last time is seeking revenge wearing a most peculiar costume.

Somehow the film feels longer than its 103 minutes because the focus is uneven. Some of the admittedly quite enjoyable and well observed material concerning Mindy’s clashes with school cliques feels like it belongs to a separate spin off Hit Girl film and detracts from the other characters. Having introduced another group of vigilante superheroes called Justice Forever, we spend very little time with them; even Jim Carrey’s much vaunted appearance is over and done with after a handful of scenes. There is a lack of definition to these supporting characters who in some cases have literally one piece of dialogue to introduce themselves when you can sense several interesting backstories and comedy potential.

The film’s narrative also strains to find a balance between fun and responsibility with speeches that would show up in more conventional superhero films appearing during the movie’s awkward mid section. Kick Ass 2 doesn’t seem sure whether it’s a comedy or not and contains more serious interludes than the first film. The fights are as fast as you’d expect though director Jeff Wadlow does not really deliver quite the sort of climactic battle the scenario demands though there are some class moments and a great running gag involving a shark.

Cast wise some actors may feel short changed by the paucity of material they get but the three leads are very strong. Aaron Taylor Johnson down to earth Dave with flashes of boisterous enthusiasm is as good as he was first time round whole Chloe Grace Moretz is even better. Hit Girl threatens to steal the movie on several occasions- whether in costume or not- and is by far the best written character in it with Moretz showing comedic timing as well as deeper dramatic chops. Christopher Mintz-Plasse remains tremendous fun as the rich brattish D’Amico whose super-villain ambitions are delightfully juvenile yet demonstrably dangerous. He provides the film’s biggest laughs in several scenes as he attempts to exert his authority.

Some may feel uncomfortable with the tenor of certain moments but they are in keeping with the tone of Mark Miller’s story which is never meant to be cosy but reflects the way teenagers might behave in this situation. Carrey’s subsequent renouncement of the film’s violence seems odd given that there are plenty of other more blood soaked movies about on a regular basis. If this film’s narrative moral compass occasionally seems to waver the script always pulls it back in time so there is nothing here without justification. In fact you may be surprised to discover that the film’s main message is a conventional one about responsibility and fighting the bad guys. It is only in the methods where it varies from some others. It goes without saying though that anyone easily offended will feel fairly uncomfortable and probably should not see this film.

Kick Ass 2 has moments of triumph and manages to juxtapose its morality and recklessness well enough to be an enjoyable ride. Yet like its teenage characters the film sometimes feels awkward in its own skin and could have been a bit more of a laugh. 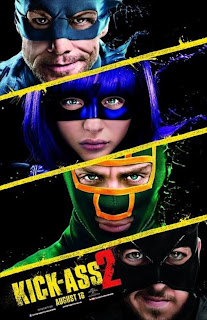