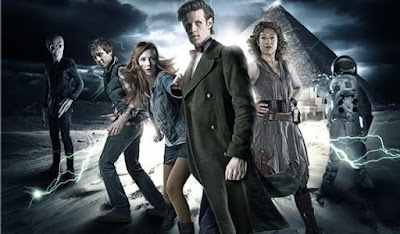 At least one thing` Closing Time` and `The Wedding of River Song` has done is silence the tedious cries from various quarters that ‘the Doctor has just committed casual genocide against the Silents’. There seems to be a Doctor Who fandom equivalent of Godwin’s Law (loosely, ‘there is a finite time in any internet discussion before someone makes an analogy to Hitler or the Nazis, at which point they have lost the argument’) whereby there is a rush to find genocidal or similar bad or dark behaviour in the central character. Just to be clear, giving a race enough power to recognise a predatory enemy and defend itself if not morally equivalent to genocide (after all, the predator can just out of your way, or else defend itself), nor is it likely to be efficient enough to remove a whole species. Sorry, rant over.
That said, the second half of the series (32? 6B? Smith 2? Apple petrichor?) has certainly had a slightly fannish obsession with the downside of being the Doctor. It cannot be said that this was not forewarned. When we were told how high the Doctor would rise and how low he would fall, I think many expected some huge and spectacular rise and fall all within `A Good Man Goes to War`. What we have actually seen has been far subtler; a fairly impressive rise in his ‘Coalition of the willing, and a couple of the coerced’ that managed, with heavy losses, to defeat two armies at Daemons Run. (And yes, I did think about whether or not to insert an apostrophe there – think of the rhyme!) The fall, however, was not the sudden reverse and kidnap of Melody Pond, but rather the slow erosion of the Doctor’s sense of self-worth and belief in his right to have companions. This is, in a way, old ground from the RTD era, and if I have any complaints about it as a plot arc it is that I would have anticipated more objections to the view from companions.


Rory has been nicely drawn and his experiences mean that he would tend to agree that the Doctor is dangerous to his friends. Even in the previous series, he complained that the Doctor encourages companions to put themselves in harm’s way. In many ways, it is this consistent stance that has prompted the speculation that Rory was perhaps the ‘good man’ that River would kill. Rory’s goodness stems from his decision to put himself in danger for his friends, his wife and his child despite is feeling that all this is not the life to lead. In many ways, this has been Rory’s series, a view supported by some very fine acting.


But Amy? Amy has fixated on the Doctor most of her life. When he airs these doubts about his relationship with his companions, one might have expected a more spirited argument about not only the good he does, but also her right to have a say in the matter. While it served the story well for Amy to remove him from the pedestal and leave the Doctor at the end of `The God Complex`, would we not have expected more fire from her before she got to that point? For me, this was a bigger lapse than any missing pirate or the absence of endless wailing and gnashing of teeth over not having the opportunity to bring up Melody. The fact that, unlike some, I did not think this loss of ‘bringing up baby’ had been underplayed in the last half of the season may reflect the fact I am not a parent. However I suspect is more down to Moffat’s breakneck pace in `Let’s Kill Hitler` not allowing the fact that they did bring up Melody in a rather unconventional way to sink in. In the end, the pain of missing conventional motherhood was addressed in a powerful way and suitably disturbing way in the finale.
Prior to the finale, it was left to a returning guest, Craig in `Closing Time`, to voice the viewer’s riposte to the Doctor’s doubt. In a no-nonsense way, he casually notes the good the Doctor does. He also asserts “you cannot choose your mates” – a point we might dispute, because the Doctor would be playing God less if he let his companions make their own choices rather than making the decisions for them. (Although as Gods go, one that pays you off with a great house, career, partner and the car you always wanted would by rights trounce most of the opposition in the religion market!) Perhaps the most satisfying part of the finale was that this arc seems to have found a pleasing resolution; we learn that assembled millions are keen to proclaim the Doctor’s worth, and at the same time the Doctor has found a way to step back out of the limelight, to become the hero in the shadows. 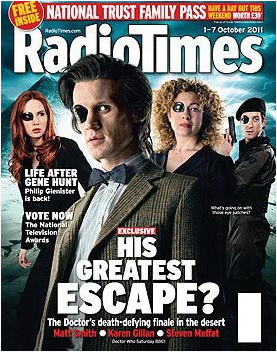 Ah yes, I’m supposed to be writing about the finale, not the season. The most remarkable thing about it was the number of elements that where exactly what we were all being led to believe. The title was not a trick in the mode of `The Doctor’s Wife`. It really was River in the space suit. The Doctor’s means of cheating of his death was actually one of the various options people had considered. Even the dangling mystery of the final question is voiced, although there is doubtless more to be made of that (and we still have an exploding TARDIS to be explained). No-one can object that the pieces were not revealed in advance, and for all that the pieces still managed to fit together into a rather satisfying whole.
The diversion into that frequent pitfall of fantasy fiction, the parallel reality/alternate timeline, was exactly that, a diversion that allowed characters to develop and for spectacle, but ultimately was not germane to the resolution of the story. Perhaps this was a deliberate riposte to those who think Moffat is all plot and no character?
It is interesting to reflect also that the Doctor’s choice to ‘marry in haste’ was not as rash as it may have seemed as the events played out, or just a means to persuade River to abandon her scheme that was endangering them all. As his escape was in place, he would have known that both he and River would live to regret his action, or enjoy the consequences. Then again, the Doctor may have been planning this for a long time, as there is 200 years of his life that we have not seen. Perhaps most of their mutual life has already passed for him? In the longer term, one wonders if the dynamic of a married Doctor may present unwelcome challenges to the writers, so maybe this is the interpretation they will take. One benefit of the Doctor’s choice of partner is allows him to interact to Rory and Amy in future. He cannot now leave them to their lives as he planned 200 years before, now he is family. On a lighter note, does marrying a machine version count in a British or Gallifreyan court? An annulment may not be so hard to obtain! 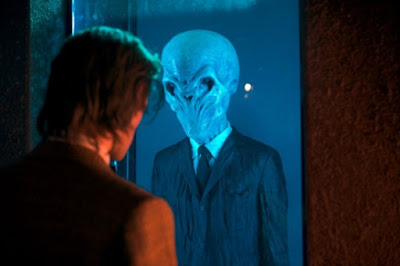 Another big development that one feels will be returned to is the cruel treatment of Madam Kovarian by Amy in the alternate world. Laudably, Amy not only remembers this, but shows real remorse and regret. She is probably too hard on herself to say she killed in cold blood, although she most certainly chose not to save her. We do not see the demise of Madam Kovarian, and in our restored timeline that demise would not have happened, so I suspect we have not seen the last of her.
Nice touches? The postmodern way in which the Silents remarked on Rory’s Kenny-like multiple deaths amused me. Once again, Rory almost attempts almost Doctor-like levels of self-sacrifice in order to defend Amy.  Winston Churchill as Holy Roman Emperor? One suspects the real man would have been happy with that idea. A Norse character Gantok playing chess was a lovely touch for the old school fans – what a pity they did not call him Fenric! A pyramid as the twin to Area 51, predictably named Area 52. And good to see that decapitation is no obstacle to bring back Dorian for another turn.
On a sentimental note, it was a nice touch that played entirely into the mood of the closing of chapters and impending death to introduce the actual death of the Brigadier. While it was a missed opportunity not to give him a last hurrah in the RTD era, he was too ill for the Moffat days, and it was fitting the old man did not fade away without mention. This chimes rather nicely with an interpretation you can see in a recent Times Higher Education Supplement that interestingly claims `The Girl Who Waited`/`The God Complex` is less about Amy and more about the loss of Liz Sladen/Sarah Jane by proxy. I may not entirely agree with that analysis, but this is certainly a series that respects its past not only in births, marriages, aging and deaths of its returning characters but also indirectly those in the lives of its viewers.
Bum notes? There were few on my list, although I feel the carnivorous skulls were a little misjudged for the audience, and the shot of Gantok’s gristly end were perhaps dwelt on too long,
Overwhelmingly, the finale was a fitting end to a series that generally got stronger as it went on. The biggest threat the Doctor now faces is money; money to produce the series to the quality we expect and swiftly enough for a generation of young fans not to be lost. For this old fan, roll on Christmas and – you know this is the right numbering really – series 33 next Autumn.
Posted by John Connors at 18:57

Email ThisBlogThis!Share to TwitterShare to FacebookShare to Pinterest
Labels: Doctor Who, The Wedding of River Song