So, here’s two reviews of the Doctor Who episode `The God Complex`
﻿

Stories like `The God Complex` always remind me of the wooden box from Hellraiser. The characters and audience are presented with a mystery and as the story unfolds little pieces snap into place until the whole thing suddenly springs open with a big reveal; hopefully not tearing anyone's soul apart in the process.
Essentially, `The God Complex`, like its closest cousins `The Girl In the Fireplace` and `The Lodger`, tells a story backwards, wringing mystery out of a piece of information which is crucial to our understanding of the story by making it part of the resolution rather than the setup as it would be normally. In the case of `The Girl in the Fireplace` it's the reason for the robots interest in Madame de Pompadour, in `The Lodger’ it's the source of the mysterious disappearances and the true nature of the first floor of the house. Imagine `The God Complex` told in the style of a normal Doctor Who episode. The Doctor would arrive, wave the sonic screwdriver around and announce that although it looked like a terrible hotel he, Amy, and Rory are actually trapped in a virtual reality maze. With that one single piece of information the audience's attitude changes from “what's going on here?” to “how are they going to escape” and as the Doctor's party is picked off one by one the whole plot becomes a much more conventional race against time.

By contrast `The Curse of Fenric`, to take an example not completely at random, tells its story the right way round. It's a story filled with diversions, red herrings, and initially incomplete information but by the time we get to the end of part three we know what the Doctor is fighting and what he must do. Three quarters of the way through `The God Complex` the Doctor has only just worked out that that the Minotaur is not feeding on fear it's eating faith and he, and the audience, still have no idea of the bigger picture of the plot.

The snag with puzzle box stories is that everything hangs on that moment of resolution. Like telling a joke, the whole thing falls apart if you mess up the punchline. And `The God Complex` messes it up. I understand that the Minotaur went to a planet, posed as a god, and was overthrown when the society became “secular and advanced enough” (to use the Doctor's phrase). I understand that this society then built an automated prison which drifts through space seeking out people with faith and snatching them to feed the prisoner. What I don't understand is why this society would do such a thing? If nothing else it's incredibly unfair on the blameless people snatched as Minotaur fodder. Unless the spaceship was built by a group of really radical atheists who wanted to punish anyone with the temerity to have faith in anything.

That single fudged revelation takes the shine of what is otherwise a wonderful episode. The rest of Toby Whithouse’s' script is full of lovely scenes and character moments which the small cast use to their advantage. The idea that Gibbs would be afraid of the Weeping Angels because they are the only race to invade his home planet Tivoli with the intention of killing rather than enslaving. Rita begging the Doctor to remember her the way she was and not watch her be robbed of her faith. And that ending where the Doctor leaves Amy and Rory on Earth. The production team also make the most of the hotel setting by using visual references to Stanley Kubrick's The Shining. For viewers who get the reference it's a bonus, for everyone else the long low tracking shots along corridors help build a claustrophobic atmosphere.

One other script oddity is the method of defeating the Minotaur. Any long term fan of Doctor Who probably immediately remembered `The Curse of Fenric` where breaking the companion's faith in the Doctor also plays an essential part in killing the baddie and resolving the story. I don't mention it to criticise because the concept works as well here as it did in the earlier story, and also dovetails into the scene where the Doctor forces Amy and Rory back into regular lives, but it's such a singular idea that I'm surprised the production team allowed the duplication. Yes, it probably didn't matter to the majority of the watching audience. Yes, it occurred in a story full of other nods to the past (Weeping Angels, the Nimon -even the title The God Complex is a play on the Nimon's Power Complex home in The Horns of Nimon). But I'd simply like to know the thought process which led to it being included. Was it intentional or was it accidental? Did someone notice and decide it was too good and appropriate a concept not to use or did a production team which includes some long term Doctor Who fans really not notice? I can't decide and I'm afraid of the uncertainty.
words: Chris Arnsby 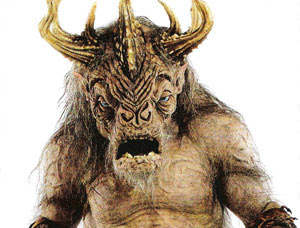 `The God Complex` as a title plays in two different ways during Toby Whithouse’s enjoyable story. On one hand, it’s the place itself sweeping up those with strong faith as it tootles about- though it seems to visit Earth rather a lot. On the other hand, we have the Doctor himself; someone whose actions have often inspired faith in others- especially in the modern series.
So, for an episode that initially looks to be a highly populist mix of classic Doctor Who scare tactics, a lot of running around in a confined space plus a big shaggy monster, the episode manages to satisfy on other levels too. Confirming that the scares are up this year, the whole scene with the ventriloquist’s dummies is up there in creepiness with the Silents, the snapping skulls and the wooden dolls. There is more characterisation in this episode than most this year, with some well sketched people that we can care about. Rita in particular is identified within the narrative as potential companion material meaning her demise hits us hard.
Whithouse enjoys playing with our expectations - that the Doctor’s fallibility is exposed in an episode about his omnipotence is a nice touch and turning the old `Curse of Fenric` aspect about people’s faith protecting them on its head adds an unexpected twist. The nightmare rooms (a great alternative title there?) seem less significant than the trailer made them out to be- it seems likely the Doctor sees himself in his own room- “who else would it be?”- Though how come Rory has no room at all?
`The God Complex` manages therefore to be both cerebral and exciting at once. Some superb sound effects render a horrific visual of the creature in our heads before we see it and it is initially unveiled in a very well filmed sequence in a bathroom. Unlike the old days- remember how rubbish the Nimon actually looked- the final revelation is excellent. Refreshingly too, it doesn’t speak English meaning the Doctor has to translate its grunts for us and everyone else. I grimaced at the Nimon reference though simply because the story didn’t need it.
In a very well cast story, the three regulars remain a more sophisticated team than we’ve had before- don’t let the Doctor’s madcap behaviour distract you from that. Often it looks like he is Amy and Rory’s distracted genius child. Arthur Darvill especially just gets better- has a companion ever had as much development and scope as Rory continues to have? I would love there to be a Doctor with this sort of laid back personality. Matt Smith puts 110% into everything and it works a treat here though in some stories you wish he’d edge back a little. Karen Gillan had her peak in `The Girl who Waited`; here she is more of a foil to the others. As a team the trio are flawless whatever the quality of the dialogue they are asked to speak. In this happy case, it is Toby Whithouse’s most accomplished Doctor Who script to date. They have become a team whose performances complement each other well and Whithouse writes them with particular intimacy and quite a lot of humour here; the Doctor calling Rory “beaky” for example. The writer has ditched the slightly stagey approach that featured in the key exchanges of his previous episodes and the result is funny, powerful and resonant.
David Walliams’ much discussed role turns out to be a win. Gibbis is the most nuanced character in the episode; he seems quite sweet till you realise his defeatist nature makes him extremely dangerous company in this scenario. Walliams pitches this so well that you quickly forget the `baggage`. Whereas James Corden in the subsequent `Closing Time` is very much as you’d expect, Walliams is subtle and quite alien at times. Amara Karan, Dimitri Leonidas and Daniel Pirrie each manage to bring enough personality to their roles in relatively short bursts of screen time.
So, how responsible can anyone be for their own deification by others? Both Steven Moffett and Russell T Davies have delved into this hitherto unexplored facet of the series (`Face of Evil` aside and that’s a different tilt) with varying degrees of success. People have questioned how Amy would so suddenly shed her belief in the Doctor – wouldn’t she think, based on past experience, that his speech about how he really was just a madman in a box was a trick of some kind? Surely Amy’s “faith” in the Doctor is no more than `trust` in a good friend anyway?
The ending is a shock till you see the next week’s episode and realise we’re back before the start of the season. In an understated way, the departure scene is a new twist on an old friend and knowing Amy and Rory are back shortly does not undermine its well written words. At the moment (and these things tend to change with subsequent viewings) `The God Complex` is my favourite of the season by a whisker simply because it seems a perfect balance between old and new Doctor Who and keeps you guessing till the end.
words: John Connors
Posted by John Connors at 19:16

Email ThisBlogThis!Share to TwitterShare to FacebookShare to Pinterest
Labels: Doctor Who, The God Complex