John Newman reviews Super 8 SPOILERS AHEAD...
As many have already pointed out- and which is abundantly clear from the moment it starts- Super 8  is a film in awe of early Steven Spielberg. It’s tempting to speculate on uncomfortable moments when he got to see just how faithful a facsimile of the sorcerer’s work the apprentice turned in. This is double edged for writer / director JJ Abrams who might be accused on the one hand of plagiarism but praised on the other of lighting up what has been a fairly repetitive summer of clanging action. Unlike almost all of its 2011 rivals, Super 8 has a beating heart and for the most part this is  strong enough to make the film a worthwhile exercise in its own right rather than just a tribute. 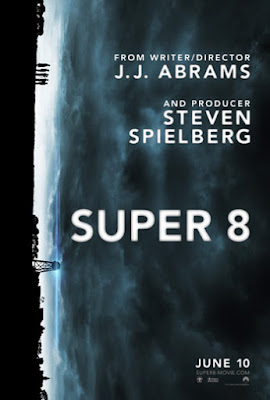 We follow a rag tag bunch of young teens in the 1980s making a horror movie. Riffing on his love of movies like The Goonies, ET and Explorers, Abrams’ script adroitly catches the pettiness, trash talk, mood changes and enthusiasm that pepper teenage projects. His cast deliver lively intuitive acting especially Joel Courtney as the reflective Joe Lamb whose family issues lie at the heart of the firm and Elle Fanning as the enigmatic Alice Dainard whom they dragoon into appearing in their movie. Her spontaneous emotional acting surprises both the kids and us in what is sure to become an iconic scene that delivers a blistering train crash. There’s no 3D gimmickry here, just the crashing of metal and the dangers it creates. This incredible sequence feels more dangerous and vital than all the Transformers movies put together. Randomly chaotic and shot to maximum effect you’ll remember it long after you’ve forgotten which superhero does what.

The kids have accidentally captured the crash - during which something dangerous escapes- on their camera and have to avoid the authorities while trying to find out what is going on. Abrams stacks up clues- people, dogs and car engines go missing- while juggling a large cast with aplomb but after the half way mark you begin to wonder whether he is writing himself into a difficult corner.
As the mystery builds and answers remain thin on the ground, he takes to separating his characters solely to lure them into various perils, none of which really lead us any closer to discovering what is happening. The kids ultimately don’t do enough solving- and have to call in adults at key moments – while the monster’s modus operendi begins to look random, created more for effect than reason. These are issues Abrams could easily have solved but we should have known that the creator of Lost would keep us waiting too long, repeating too many tricks and ultimatley rushing both the reveal and denouement.
So the film is let down a little by its final 10 minutes which barely make sense and lack any kind of dramatic pay off. Thematically there are interesting parallels to be found in Joe’s and the monster’s story but the latter is such a snarling hybrid that any sense of what it is about is not properly conveyed to us. We therefore feel at best neutral about its plight.  Instead of spreading matters across the last half hour, Abrams wraps both the human and the sci-fi stories up out of the blue in a somewhat portentous, dialogue free scene that. The characters we’ve just spent so much time with watch wordlessly as something incomprehensible happens and, er, that’s it.
Despite the poor conclusion, Super 8 is still a very good and enjoyable film; Abrams’ undoubted visual skills are well displayed- the aforementioned train crash, sequences where the creature attacks a gas station and a crashed bus and a stretch where all kinds of weapons are out of control across the town all deliver. He is also good at catching the more intimate moments; his trademark lens flares are in evidence and the cast are never less than excellent.  Had he tweaked the story a little and applied some of that beating heart to the sci-fi side, Super 8 might have been a super 10!
Posted by John Connors at 14:57