In a new 10 part series, Tim Worthington is your guide...
Intro
There are the 'big' TV shows, widely remembered for both good and bad reasons. There are the obscure shows, many of them nonetheless the subject of keen critical attention. And in between, there are so many more that were popular - or at least prominent - in their day, but have rarely been mentioned since.
If it's not famous for being good, notorious for being bad, or full of retrospective cultural significance, chances are that the average (in both senses) TV show - especially in the days when almost everything was made basically to be shown once - will soon fade from the public memory. Even pulling in huge ratings or taking up a primetime slot for a hefty continuous stretch cannot save it from becoming the stuff of ill-fated 'does anyone remember...?' conversations and career footnotes on IMDB. You'll never find this sort of show being enthused over on clip shows, or repeated on digital channels. The TV equivalent, more or less, of Mississippi by Pussycat or Baby Jump by Mungo Jerry - songs that were number one hits at the time (they were, look them up!) but have rarely been heard since. Except, in this case, it's rarely seen rather than rarely heard. Well, the comparison still works. Sort of.
Over the next ten instalments, we'll be taking a look at some of the biggest TV shows ever to be completely forgotten after they finished. Along the way we'll find out how a giraffe connects Cleo Laine to Dinky Toys, what an action series about a champion skiier might be called in other countries, and just which TV presenter won't appreciate being reminded of the phrase "That's all from the Comedy Wall - Hurrah!". And it all starts with a puppet with a poor grasp of what constitutes 'four'...
10. BIZZY LIZZY (BBC 1967)
You could probably fill this entire list with former occupants of the BBC's Watch With Mother slot alone. In fact we'll be meeting another one higher up the 'chart', but for now, here's the story of a girl who - in one form or another - spent almost twenty years loitering around the lunchtime schedules.
Bizzy Lizzy first appeared in 1955 as the star of a flimsily animated insert in Picture Book, the itself not always widely recalled 'Monday' instalment of the original Watch With Mother lineup. The basic premise of these short adventures was that she had somehow come into possession of a Magic Wishing Flower, which made her outlandish dreams come true but with a catch; she could only make four wishes in one day, and if she exceeded that oddly arbitrary total, then - in true fairytale fashion - all of her previous wishes would automatically come undone. Most of this limit-conscious wishing tended to involve conversing with animals or visiting far-flung exotic locations, something that was admittedly quite easy to realise in three-minute instalments involving little more than cardboard cut-outs. 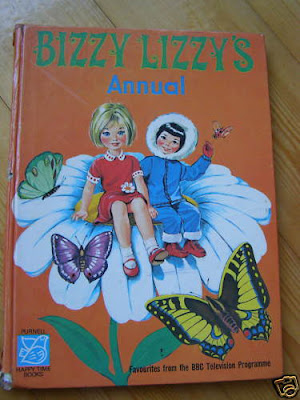 Though never quite as interminably slow as Rag Tag & Bobtail, Picture Book was infamous as one of the more old-fashioned of the early Watch With Mother shows, something that wasn't exactly helped by the studio-bound human presenter and noticeably 'of its time' camerawork. By 1967, with colour broadcasting on the horizon and a number of new and indeed colourful shows lined up to replace it, Picture Book had been phased out of the schedules. Westerham Arts, the independent production company who made the original Watch With Mother shows, were none too pleased about this, and persuaded the BBC to replace it with an updated series expanding Bizzy Lizzy's wish-centric escapades into a full fifteen minute programme. 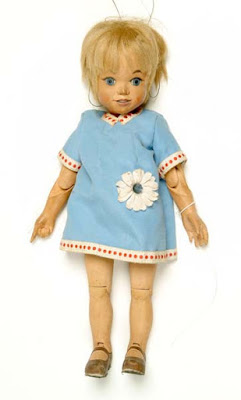 For this, Lizzy became a three-dimensional string puppet (which bore an uncanny resemblance to latterday indie popster Isobel Campbell), accompanied on her travels by talking doll Little Mo. The series followed much the same pattern as her earlier adventures, though the longer running time and larger sets allowed for more imaginative storylines, including jaunts to icy tundras and butterfly-festooned quasi-psychedelic vistas, not to mention a 'be careful what you wish for' morality play about wanting to have really long hair. While not exactly dragged kicking and screaming into the Swinging Sixties, it was all very modern indeed for the makers of the The Woodentops, though even so they didn't quite see fit to dispense with the stiffly formal songs. The BBC were clearly impressed, as shortly afterwards they commissioned Westerham Arts to produce a similarly updated colour remake of Andy Pandy, which itself is hardly remembered by anyone... but that's another story.
Bizzy Lizzy would continue to be shown in constant rotation well into the seventies, inspiring countless annuals and storybooks and a long-running strip in Pippin comic (not to mention an existentially baffling Little Mo doll), but eventually dropped out of the schedules and indeed out of the memory. It's since become one of the few Watch With Mother shows not to have yet resurfaced in any form, the only post-transmission sighting being a clip used in an edition of Telly Addicts. It seems that for poor old Lizzy, wanting to be as well remembered as The Trumpton Fire Brigade or Professor Yaffle was her one wish too far.
Next Time: Pop hopefuls shouting corny gags at each other through shutters...
Posted by John Connors at 19:21