Rioters decimate ’s biggest indie film and music warehouse
Network Distribution who have released dozens of classic and archive TV titles have vowed to carry on despite a huge fire at a storage depot in last week which destroyed all their stock.  The building, Sony Entertainment’s only UK DVD and cd warehouse, was gutted by fire on 8 August, after rioters set it ablaze. The damage affected vast amounts of stock held by several independent music labels and film companies during an already parlous decade for both.
Network says stock availability will be affected “for the next few weeks” with all titles due for release this month- and possibly beyond- delayed. However they have vowed to continue their service.
In a statement on their website, Network’s Tim Beddows states; “Whilst the loss of stock (and mercifully only stock) is regrettable, I'm happy to reassure everyone that the interruption in supply will be short term and is the only aspect of the business affected. Whatever was lost that night is completely replaceable as we have asset backup for all our projects.
As the manufacturing base is elsewhere, replication is also unaffected but it will, however, take a while to replenish the catalogue.” They also said that their forthcoming release schedule will continue – “in fact just this week agreement was reached for a series of titles that archive television fans will be thrilled with.”
Network has been behind releases that have started to fill in the many blanks in our awareness of archive TV. Programmes unknown to some generations- and simply distant memories for others- have been released for all to enjoy in what has become a diverse and comprehensive schedule. This writer has for the first time discovered two new favourite programmes- The Ghosts of Motley Hall and Tom Grattan’s War thanks to Network and needless to say their releases have been a key provider of material for This way up.
﻿

Sony’s Enfield depot was a 20,000 square meter, three storey site that is believed to have contained as many as 30 million DVDs including stock belonging to the British Film Institute as well as independent film distributors Dogwoof, Artificial Eye and Metrodome. The BFI lost more than 120, 000 DVDs and Blu-rays. They said: “Fortunately, our stock is held at two different locations so we still have access to copies of all our titles. Efforts to both fulfill customer orders and replace the lost stock will begin straight away,”
Dogwoof CEO Anna Godas said:  “All our (50,000) DVDs were in the warehouse, so any stock we had is gone. Sony have said they will look after insurance. The problem is orders that are happening and will happen in the next month. DVDs are still our biggest revenue.” In an unfortunate irony the company’s latest film The Interrupters concerns social unrest. Artificial Eye also confirmed that their entire 300-film-strong catalogue stock, which includes Winter’s Bone, Route Irish, The Three Colours Trilogy and Of Gods And Men, was destroyed.
The UK’s independent music industry was also badly hit by the fire- this week’s NME carries a big story on those affected which includes stock belonging to more than 150 record labels such as Warp, Wall of Sound, XL, Sunday Best, Beggars and Domino. Many of these were shortly to be released meaning careers could be adversely affected by lack of availability of some new albums. One label, Finders Keepers, has already released the first of a planned series of compilation albums aimed at raising money to aid the company. 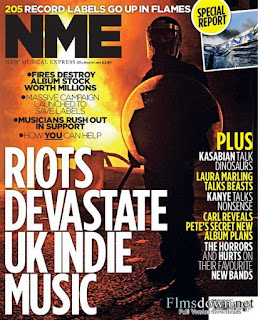 Sources say that Sony did keep master copies of all the stock at a different location so nothing has been completely lost but at a time when DVD and cd sales are being squeezed by low supermarket prices and people downloading music for free and the independent sector is struggling in the economic climate, this is a difficult extra burden.
For more info  -
www.networkdvd.net
www.bfi.org.uk
www.nme.com
www.finderkeepersrecords.com
Posted by John Connors at 10:02