His first album 2017’s `What Do you Think of the Car?` was, in the parlance of rock journalists of the past- all killer, no filler. A rewarding, eclectic and powerful debut that had lyrics about the likes of transgender rights (not such a hot button issue three years back ) and corruption in FIFA (not a topic I’m aware anyone else has written a song about) it gained him something of a reputation for being outspoken, possibly even a spokesperson for a generation. Musically he’s been given the slightly odd label `baby Bowie` as if he just copies the Thin White Duke, a rather narrow view. Eschewing such targeted songs this time he has opted for more abstract lyrics dealing more with feelings than issues. There is a whiff of concept in a recurring character called Daniel but no particular story (unless there is?) though themes of space, survival and escape recur. Musically he has hit a rich seam of lively guitar and piano led songs of the sort that make toes tap and choruses sail around your head. Honestly two or three listens to some of these songs will indent them in your memory!
Something on each song surprises and for all the lazy tagging of Bowie to his music there are numerous other influences, so much so that like the best musicians he has created his own niche, his own sound. His singing too is passionate and often shouted out with urgency. This is a more mature adventurous album in which he opens with `You Better Believe!!`. BTW I’m reviewing this in the running order album version, though I’m told the modern kids stream songs in random order, the scoundrels. Running order is so important so if you do stream these songs you really should listen to the first five in this order anyhow because it makes musical sense. Indeed the through line of the songs as they are in the running order makes for an interesting journey and the sound is less and less retro futuristic the further it goes.
`You Better Believe!!` barrels along with prime Supergrass like momentum and some prominent piano, an instrument that is well deployed throughout the album. It’s a song that delights in taking left turns into new bits. A lot to pack into four minutes and fifty three seconds with lyrics running the gamut from rockets to Quavers! `Be An Astronaut`- surely the album’s centrepiece and definitely my favourite -  already sounds like a classic song from its piano intro in. Yep it does draw from the Bowie of Hunky Dory / Ziggy period but also as much from Elton John. I love the fuzzy guitars and the track has such a great build towards the end as the backing vocals assist the launch of what is surely going to be a classic in its own right. Incidentally there are a couple of live versions of this song online which are well worth checking out. Lyrically it harks back to a time in the Fifties and Sixties when space travel was still seen as an exciting prospect before people became cynical about the cost.
`The Key to life on Earth` may open with echoes of `Ashes to Ashes` but then swerves into something more low key than a lot of other songs on this album. The first track from this album released back in January (the album was originally scheduled for May) its another infectious chorus leading to a big singalong thingy at the end. `Beautiful Faces`, something of a pot shot at our infatuation with ourselves and our online presence has surely the catchiest chorus anyone has released this year! It’’ll be in your head tomorrow! There’s a touch of Suede swagger to this one. 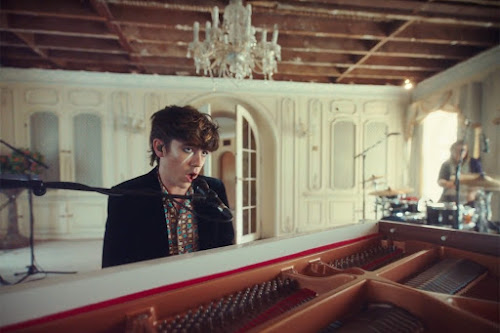 `Daniel, You’re Still a Child` delves further into the elusive character – he’s mentioned in several other songs. This track which carries something of a U2 vibe makes Daniel out to be something of a wayward person whose “been acting quite strangely since ten years old”. By the sound of it he won’t get to be an astronaut and could end up in prison.
`Emily` stands out from the other songs being more reflective in mood though rather sharp lyrically describing her as “so spiteful and mean with your afternoon routine” suggesting betrayal of some sort. `Twice your Size` builds on an acoustic sound while warning about online so called influencers “It only means half as much when you say its twice your size.” `Rapture` is the most curious track starting with a more modern sounding auto tuned voice and has an odd mention of Mrs Thatcher but ends up with lots of guitars and shouting! It seems to be suggesting that Mrs T’s influence is still being felt in the governments we have now.
`Sagittarius A` deals with climate change but seems to have a somewhat defeatist lyric even to the point of advocating a modern Noah should “start building”. Downbeat yet maintaining the catchy chorus and concluding withe the advice "So would you take the day off Mother Nature” amidst thick guitars its an intriguing mix. `Eventually Darling` seems to be about our short lives and is a perfect counterpoint to the previous song. It has the timbre of resignation, of just getting on with it. These two songs in particular seem to bring McKenna almost up to date lyrically and musically though they do suggest that his heart lies in an earlier time.
The covers of his two albums appear to perfectly show their intent. The first was a standard portrait shot with just a hint of facial glitter to give away his musical roots. In `Zeros` he is pictured out of focus in a sort of spacesuit reaching towards us as if he’s travelled back in time. As a package this album achieves the feat of bettering his excellent debut and setting out a path ahead.
Posted by John Connors at 22:51