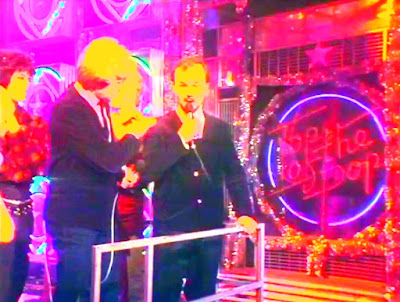 The presence of certain DJs normally makes it impossible for BBC4 to repeat special editions of Top of the Pops. The last acceptable Christmas Day show was presented by Peter Powell in 1979, along with some bloke called Kid Jensen. BBC4 also missed out the 1000th edition, 05/05/1983, and the Radio 1 15th anniversary special, 30/09/1982.
Michael Hurll seems more keen on celebratory back-slapping than his predecessor Robin Nash which might explain why special editions dry up pre-1980. Coming up later (30/08/1984) is a live edition following an Intercity train on a speed run from London Paddington to Bristol Temple Meads. On arrival in Bristol leading power car 43002 was named Top of the Pops. Don't bother looking for this on BBC4 as J*mmy S*v*l* was the DJ on the train. It all sounds a bit high concept but this sort of thing was needed to keep up national morale in the long gap between royal weddings.
Relax is a single more notable for its absence from Top of the Pops, and the performance here only makes the subsequent ban seem even more ridiculous. Still there's something pleasingly circular about the first song of 1984 also being the most controversial.
[32] Rod Steward: Sweet Surrender. Rod's on video. It's not clear if this is the actual video for the song or a performance spliced in from another programme. In long shots there's a flashing orange and yellow wheel of lights that looks a bit like the old Nationwide logo but Nationwide was replaced by the dismal Sixty Minutes in October 1983. This is most likely footage from Michael Hurll's other gig on The Late, Late Breakfast Show.
FRANKIE SAYS UNACCEPTABLE LYRICS ALERT: "Heart is tired and full of doubt/now you've sucked me in don't spit me out." Rating. 5 out of 7 Heurghs on the Relax scale.

20th anniversary stuff: John Peel and Alan Freeman spoof those ghastly 30 second Top of the Pops interviews.
Peel: "Do you have any anecdotes about those early programmes Alan?"
Freeman: "No. Not really John no."
Peel: "Would you like to introduce the next part of the programme?"
Freeman: "No. I don't think so. No."
Peel: "Would you like a cup of tea?"
Freeman: "No not really..."
Peel [interrupting]: "Let's press on!"
Freeman [mike slowly fading out]: "...but I would like to say it's great to be back..."
This is followed by a selection of archive film. The Rolling Stones, Let’s Spend The Night Together; Procol Harum, A Whiter Shade Of Pale; Lulu, Love Loves To Love Love; Engelbert Humperdinck, The Last Waltz; The Alan Price Set, Don’t Stop The Carnival; Peter Sarstedt, Where Do You Go To My Lovely (ugh); The Hollies, Sorry Suzanne; Brotherhood Of Man, United We Stand; Edison Lighthouse, Love Grows (Where My Rosemary Goes); Jethro Tull, The Witch’s Promise; and The Dave Clark Five, Everybody Get Together.
This black and white footage begins with something that looks like, but possibly isn't, the sixties Top of the Pops titles. It ends with something that looks like, but definitely isn't, Top of the Pops footage. The Beatles singing All You Need Is Love from Our World (15/06/1967). BBC4 viewers will be unsurprised to learn that J-n-th-n K-ng is painlessly snipped from between Edison Lighthouse and Jethro Tull.
[5] Status Quo: Marguerita Time. Just before the line "could it be that I'm still wondering," a perfectly aimed balloon smacks into the front of Francis Rossi's microphone. The microphone shoots backwards and catches Francis in the mouth before falling to the floor. This is all in a days work for Francis Rossi. He ducks down, grabs the microphone, sticks it back in the stand, and gives a thumbs up to the camera. Rick Parfitt finds this all very amusing. The business seems to put the pair in a mischievous mood. For the rest of the performance there's a lot of talking and laughing. Watching the pair is like watching a couple of kids plotting in class. At the end of the song they climb onto the drum rostrum and then suddenly Rick tips forwards and he, the drum kit, and the drummer, are sliding off stage. Accident or deliberate? You are the jury. It gets a big cheer from the audience.
FRANKIE SAYS UNACCEPTABLE LYRICS ALERT: None. Status Quo are suitable for nun's discos and staid Box Socials.
20th anniversary stuff: And now, in colour, it's; Deep Purple, Black Night; Slade, Coz I Luv You; Ashton, Gardner & Dyke, Resurrection Shuffle; Wizzard, Ball Park Incident; Alvin Stardust, My Coo Ca Choo; Roxy Music, All I Want Is You; Bay City Rollers, Bye Bye Baby; Cliff Richard, Devil Woman; Ian Dury & The Blockheads, Hit Me With Your Rhythm Stick; Gary Numan, Cars; Paul McCartney, Coming Up; Soft Cell, Tainted Love; Dexy’s Midnight Runners, Come On Eileen.
G*ry Gl*tt*r is edited out from between Alvin Stardust and Roxy Music. 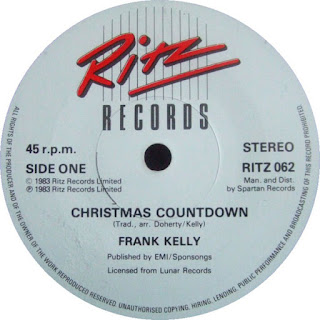 [26] Frank Kelly: Christmas Countdown. The chart countdown has expanded to take in the top forty for the first time since 1976 (I think). Presumably it gives a larger pool of records that conform to the Top of the Pops rules; no band back two weeks in a row unless they are number one; highest climber; no singles going down the chart; etc. This is followed by Father Jack from Father Ted with one of the most bizarre songs to make Top of the Pops since Guy Marks and Loving You Has Made Me Bananas (18/05/1978). Frank Kelly is visibly nervous. Watch the paper shake in his hands and compare the speed of this live performance to the versions on Youtube. Still, it's done well even if, as John Peel points out, it's a cut down Christmas Countdown that starts on day five.
FRANKIE SAYS UNACCEPTABLE LYRICS ALERT: "Hell," "louser," "manure-face," "you dirty Jezabel,"you old bag," and "slurry head." Rating. 6 Zs out of 15 ZTTs.
Video Top 10: The structure of this live show is very odd. Three studio performances, two videos, one repeat performance, two pre-edited selections of old clips, and then this third pre-edited package comprising the Top 10 videos; from 10 to 3. Less than half of this 40 minute show is studio material which makes me wonder why they bothered doing it live. Did they just fancy an easy week?
[10] Howard Jones: What Is Love? Howard's gone to Paris and looks for love while he mopes around Le Jardin des Tuileries.
[9] Paul McCartney: Pipes Of Peace: Multiple McCartneys in a damp field.
[8] Thompson Twins: Hold Me Now. Filmed indoors in a studio. Boring or sensible at this time of year?
[7] Kenny Rogers & Dolly Parton: Islands In The Stream. Granny music.
[6] Billy Joel: Tell Her About It. Sixties nostalgia.
[5] Status Quo: Marguerita Time. Again? This time they're on film and dressed as yellowcoats. Hi de Hi!
[4] Culture Club: Victims. Boy George floats around a film stage.
[3] Paul Young: Love Of The Common People. Also filmed indoors.
[2] Slade: My Oh My. Slade join Paul Young in being kept off the number one slot by The Flying Pickets. This is a repeat of their performance from before Christmas (22/12/1983). Closer inspection of the footage reveals that what I thought were scarves are in fact pieces of paper with SLADE printed on them; cheapskates.
FRANKIE SAYS UNACCEPTABLE LYRICS ALERT: "Don't a woman need a man? Try and catch one if you can." Rating 1 tribe out of 2.
[1] The Flying Pickets: Only You. The Flying Pickets are unavailable this week. Here's the promo, filmed in a grotty pub. Look at the poor paint job done on that woodwork in the background. Disgusting.
FRANKIE SAYS UNACCEPTABLE LYRICS ALERT: "It's just the touch of your hand. Behind a closed door". Rating. Frankie gives you 800 more pleasure units you have 1600 and you're 1% a real person.
[19] Kool & The Gang: Straight Ahead. The crowd dance into 1984 as the credits roll. And look! Someone's brought their SLADE piece of paper with them.
Posted by John Connors at 23:45