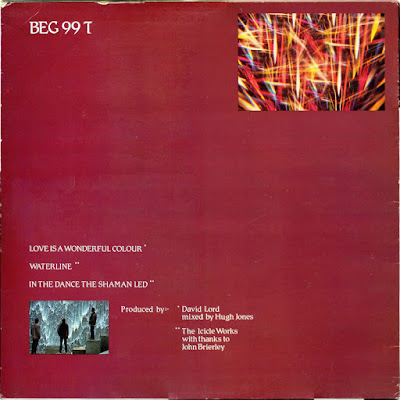 1984 is Steve Wright's breakthrough year. He'll be hosting six editions of Top of the Pops. It's not many, but it's more than the two he did in 1983 or his one outing with Richard Skinner in 1982. It's also the year when he starts to build his reputation as Radio 1's craziest DJ while Adrian Juste glowers in the corner and grinds his teeth. It's notable when Steve Wright is allowed onto other BBC1 programmes that his character Mr Angry, from Purley, is mentioned in the listings for both; On The Road 01/09/1984 (BBC1 follows the Radio 1 Roadshow around the UK) and Saturday Superstore 17/11/1984. This makes me wonder if it was Steve Wright or Mr Angry who was seen as the real draw? A few clips of Mr Angry have made it to Youtube. The material is pretty thin. Sample gag: Mr Angry gets angry when he finds out he doesn't need to go on a ferry to vote in the European elections. It's easy to sneer, and I just did, but I'm sure I'd have found the character hilarious in 1984. However, listen to the 1985 Mr Angry single on Youtube if you dare.
Meanwhile on Top of the Pops; The Icicle Works are also here. They don't appear to have any connection to the 1985 computer game Icicle Works. (John- It’s also a great single with urgency, melody and a chorus that soars like a bird. ) 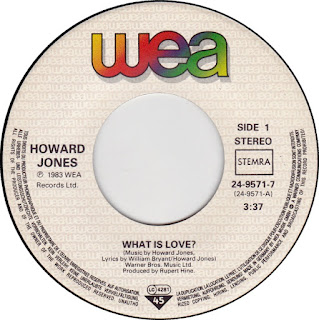 [2] Howard Jones: What Is Love? On video. Howard Jones has travelled to Paris. Can he find out what is love in the most romantic city in the world? Half the fun of watching any location footage is trying to guess which of the people in the background aren't supposed to be there. I'm pretty sure that elderly lady wasn't intended to be in shot as Howard launches into the first chorus. Well done to the team for going to Paris and not featuring the Eiffel Tower. (John- It was behind them the whole time, they just didn’t turn round!)


[13] Shakin Stevens & Bonnie Tyler: A Rockin' Good Way. Apostrophe overload. Shaky and Bonnie; a classic pairing like cheese and vinegar, or Fish and Yorkshire pudding. What does Bonnie Tyler gets out of this unlikely coupling? Was she just returning a favour for the Welsh Mafia?

14 Roland Rat Superstar: Rat Rapping (Brilliant Isn't It). On video. You'll have to wait until The Chicken Song in 1986 to see live puppetry on Top of the Pops. Coincidentally that's also the same year that Roland Rat turns up on BBC1 with Roland Rat -The Series. What's that? Michaell Hurll was Executive Producer of Roland Rat -The Series. Oh my God. This goes all the way to the top! We're down the rabbit hole here, people.


Roland Rat has been neglected by Top of the Pops. His single was released 19/11/1983 and in that time its been played once under the closing titles to the 22/12/1983 edition. I imagined Michael Hurll might feel awkward about giving publicity to the saviour of TV-AM but having now seen the video I think the issue was a lack of quality. Its not good. On any level. The video is boring, the song's unremarkable, and the audio quality is poor; consisting mainly of Roland mumbling. Not so much Rat Rapping as INSERT PITHY REMARK.


It's better than Roland Rat's follow-up single. A cover of Love Me Tender.

Public Notice: Since the Ludricous Images Act of 1993, it has been illegal to print, link to or otherwise draw attention to photographs of ludricous television characters. Blogger has a guide as to alternative images we might like to insert instead. In the place of Roland Rat it is a spoon.


[19] Snowy White: Bird Of Paradise. Steve Wright describes this as "e-vok-a-tive". It's fine.


Best British Video Award: Mike Read, who for some reason is wearing a single white glove (could it be a Michael Jackson thing?), introduces the nominations for this new category in the British Rock And Pop Awards. There seem to be about a million nominees but Let's Dance is obviously best. Make sure your postcard gets to Top of the Pops no later than 4th February 1984. The internet has no information about who won. Does anyone know?


[22] Lionel Richie: Running With The Night. On video. Lionel Richie slinks around in a zoot suit. Best bit, when his gang stride arrogantly into a road and force traffic to stop with a screech of brakes. Imagine filling out an insurance form with that as the cause of accident. I like to imagine that this is how Lionel Richie always crossed the road. Top of the Pops stops the video just as Lionel Richie and his gang crash a wedding, to the consternation of the guests. What happens next? (John, Tsk, after all his dancing on the ceiling and staying up all night long I’m starting to see Lionel was the neighbour from hell)


[18] Joe Fagin: That’s Living Alright.  Joe Fagin pops in to sing the theme to Auf Wiedersehen, Pet. Michaell Hurll must be getting fed up of all these ITV series generating hit singles. When's the theme to Whicker's World going to chart?


[1] Paul McCartney: Pipes Of Peace. On film. The Flying Pickets falter and Paul McCartney nips in to nab the number one spot; take that Slade and Paul Young.


[4] Billy Joel: Tell Her About It. And that's it. Audience dancing and credits to close.


19/01/84 Peter Powell: "Hello! It's Thursday night! It's the biggest pop party in Britain! It's Top of the Pops!" Simon Bates: "And we've got six tunes tonight that are totally new to Top of the Pops. Kicking off with this one. It'll clear the wax out of your ears. Whitesnake are here with their new single."
(29) Whitesnake: Give Me More Time. Peter Powell has tucked his jumper into his toursers, the diabolical fiend. Its a bad look under any circumstances as is the facial expression he pulls as Simon Bakes introudces Whitesnake. Its meant to be an AC/DC-esque "those about to rock" facr but it looks like he's got cramp.


[13] Big Country: Wonderland. The Wonderland video starts with someone (let's go out on a limb and guess it's lead singer Stuart Adamson) leaning on a fallen tree in a snowy landscape and bitterly regretting his choice of thin jumper and jeans. What's going on? Why are the rest of the band sensibly dressed for the weather? Why are there shots of Stuart standing alone in a landscape devoid of snow? If I had to guess, and I do, Stuart was called early for filming and decided on his jumper/jeans ensemble in more clement weather. Then it snowed. Then rest of the band arrived. The latecomers all got to wear nice warm clothes but Stuart had to match what he was wearing in the earlier footage, and spent the rest of the day freezing. 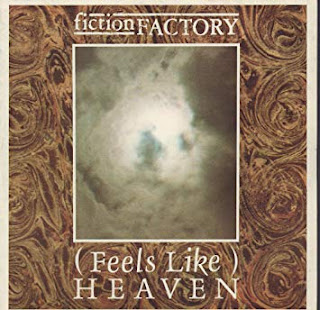 [28] Fiction Factory: (Feels Like) Heaven. It's that one. You know. You'll recognise the chorus when it starts. Fiction Factory aren't doing anything to improve the sartorial standards of Top of the Pops. The lead singer is wearing a shapeless white top and trousers, and there's far too many pleats and mullets on the rest of the band. Fiction Factory have been put on a very fussily designed stage that looks like it's made of perspex scaffolding. This renders the keyboard player invisible in most shots of the group because he's jammed behind a support pillar. This turns out to be a blessing. He gets a close-up during the instrumental which reveals he's wearing a really hideous patterned shirt that mushrooms over the top of grey high-waisted trousers.
Best British Video Award: Simon Bates makes a meal of explaining the rules. "The Top of the Pops video British award, the British is the important one about that, is the first time its ever been part of the Rock and Pop awards which of course happens a little later on. What we'd like you to vote to for is the top video that you saw in 1983. Now its got to be a British act, or a British band, or a British individual taking part in it, but it can be produced by anybody. You can vote for any video that was produced in 1983 that you saw that year and it will get the award when the votes are counted up as being the Top of the Pops British video award for 1983." I hope that's clear. Best to let this rain of nonsense wash over you and admire the masterful way Peter Powell gazes into the middle distance and waits for Simon Bates' lips to stop moving. I'm voting for Plastic Bertrand and Ça Plane Pour Moi, and I hope you do as well. Incidentally, as I'm never going to have a chance to mention this again, if you search for Ça Plane Pour Moi on Youtube you can see Plastic Bertrand performing his hit on Dutch show Top Pop. He's bouncing around on a trampoline surrounded by a crowd of overexcited and frantically dancing teenage girls. It looks genuinely dangerous at times.
[16] China Crisis: Wishful Thinking. China Crisis are multiplying exponentially. Last time there were two of them, this time there's four. Let's hope they don't appear too many times on Top of the Pops or the group will start to outnumber the audience.
[24] Gloria Gaynor: I Am What I Am. Gloria Gaynor's tribute to Popeye starts off slowly but ends up being the best song of the night.
[11] John Lennon: Nobody Told Me. On film and, unexpectedly, a new single from John Lennon; the joint Lennon and Yoko Ono album Milk and Honey. The best bit of the promo is film footage of John Lennon struggling to launch a rowing boat while Yoko Ono huddles in the stern and looks like she's never been in a boat in her life.
[1] Paul McCartney: Pipes Of Peace. Back to back Lennon and McCartney. Possibly the first time this has happened on Top of the Pops.
[17] The Police: King Of Pain. Unusually Frankie Goes to Hollywood haven't appeared this week with Relax. No, I'm just being silly, the song's been banned but that's not a problem. I mean it's not like it's going to get to number one.
(It is, obviously).