Watched by Chris Arnsby. Peter Powell: "Hello! Welcome to another edition of Top of the Pops! We've got Toyah! We've got Bauhaus! We've got Kool And The Gang! And we've got a new number one! But for openers it's The Piranhas and Zambezi!"
[37] The Piranhas: Zambezi. Top of the Pops is in full wacky party mode tonight. Check out the audience cheerleader dressed early for Halloween as a skeleton. The Piranhas are keen to join in for their first studio appearance in two years. Lead singer Bob Grover is dressed as Dennis the Menace, complete with a copy of The Beano sticking out of his pocket. The backing singers are done up as school girls. And the drummer is wearing a magnificent colourful budgie costume, lovely plumage. It puts to shame the lousy dead-eyed efforts The Tweets wore in 1981. (John- Brilliantly the lyrics include the line “Zambezi, Zambezi, Zambezi, Zam.”) 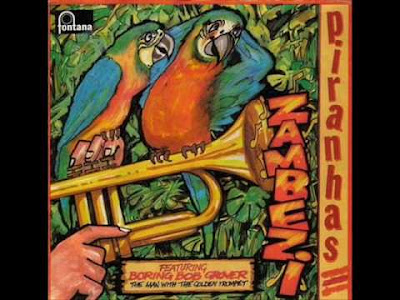 [3] Kids from Fame: Starmaker. On film, a clip from the TV series. Divorced from any context this is bizarre. An old man sits on a stage in an armchair, while the kids from Fame gather round and sing a song at him which would sound threatening under other circumstances. "Starmaker. Dream breaker. Soul taker. We're happy now." It's obviously meant to be an occasion of deep emotion. (John- “Soul Taker”? That sounds totally evil. This man is not all he seems)The old man -I'm going to go out on a limb and guess he's called Greg because of a banner in the background-  clenches his jaw, purses his lips, and frowns. It's a remarkable display of understated emotion. Like watching J.R. Hartley find an entire shop of Fly Fishing books.
[24] Imagination: In The Heat Of The Night. A repeat from the 30/09/1982. Imagination are dressed in sparkly togas and look like disco versions of super-advanced aliens from Star Trek. Leee John is obviously feeling brave. Sitting down in that cold dry ice in that skimpy costume must be chilly in important places. 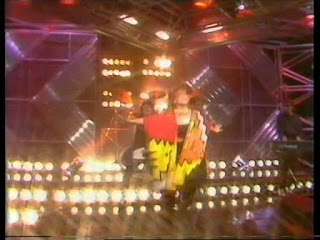 [35] Toyah: Be Loud Be Proud (Be Heard). Brace yourself. This one's bad for the eyes. Toyah's performing on a stage loaded with hundreds of white lights, all of them pointing into the camera. My shadow is burnt into the wall behind me. On the occasions when Eric Wallis, credited with Lighting, turns them down you can admire the nimble footwork of the cameraman working the handheld camera. He's choosing his moments very carefully and skipping from one position to another as the camera changes to minimise his chances of being seen. It doesn't work terribly well or I wouldn't be writing this. I wonder if some of the rehersed timings are slightly off. There's one moment when he dashes to the front of the stage but he's captured in full glory because the shot is still zooming in on Toyah. It's an interesting insight into the way that watching at home is different to being in the studio. At home, if everything goes well, the people dashing around on stage are invisible because they exist outside the edge of the frame. In the studio you are constantly being distracted by people appearing in full view and getting in the way.
[31] Kool & The Gang: Ooh La La La (Let’s Go Dancin’). This is odd. It's not a clip imported from a show like TopPop, and it's not blurry NTSC video, but it doesn't look like Top of the Pops. There's no audience, the lighting is more muted, and the camera work is a little more static. BBC Genome tells me that Kool & The Gang were on The Late-Late Breakfast Show (Producer Michael Hurll) on 16/10/1982. Could the Executive Producer of Top of the Pops (Michael Hurll) have simply edited the clip from on show to another? I don't know how much this sort of thing used to go on at the BBC. Did Swap Shop used to play clips from The Old Grey Whistle Test?
[18] Bauhaus: Ziggy Stardust. "Bauhaus have done a tribute to the alter ego of David Bowie. It's called Ziggy Startdust." Well what Peter Powell calls a tribute I'd call a straight cover. Pot-ato/Poh-tato. This performance is more notable for lead singer Peter Murphy's manhandling of the audience. He crouches and skuttles across the stage like a spider, appropriately enough, and keeps grabbing people. A woman in a blue denim jacket is grabbed and bent over the stage on the line "he played it left hand/but made it too far." Later, on the line "he could leave 'em to hang," he appears to shove out of the way two women who are blocking his close-up. Oh, this is a repeat from the 07/10/1982 show.
[7] Spandau Ballet: Lifeline. As is this. However Spandau Ballet are gentlemen and know how to treat a lady proper. No one gets grabbed.
[27] Sharon Redd: Never Give You Up. On video. Sharon Redd shares the stage with several multicoloured pieces of perspex which -for reasons I really can't explain- remind me of Captain Scarlet And The Mysterons. It's possible they just look like something from Cloudbase. "I'll bet that record's played at least a couple of times a night in the best discotheques!" simpers Peter Powell. Frankly, I'd expect the best discotheques to have enough records not to have to play the same song more than once.
[20] Shakin' Stevens: I'll Be Satisfied. Shakey's astonishingly self-aggrandising video in which he appears on stage at the Shaftsbury Theatre in front of a shrieking Beatlemania style crowd.
[1] Culture Club: Do You Really Want To Hurt Me? A repeat from the 23/09/1982 programme.
[9] Kid Creole & The Coconuts: Annie I'm Not Your Daddy. The usual credits played over shots of the crowd dancing. 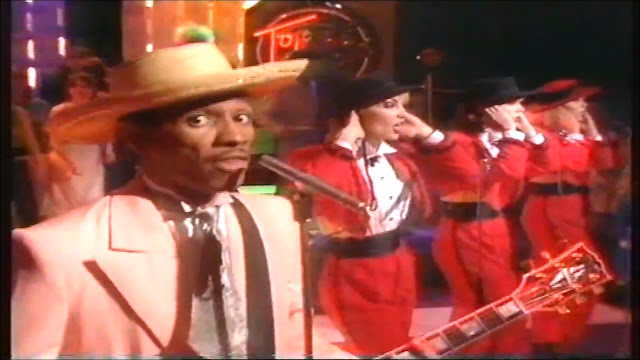