The previous two Thor films struggled to match their Marvel contemporaries seeming over reliant on eye popping CGI effects and mythological gobbledegook while being somewhat portentous. They were great to watch on a big screen once but didn’t leave much of a deep impression afterwards. This third outing lightens the mood considerably bringing fun into the franchise and hurling our hero into fresh territory. The dialogue is zingy and packed with amusing asides meaning the film is never at risk of taking itself too seriously. This all does mean it is somewhat similar to Guardians of the Galaxy but that’s a good thing right?
Spoilers beyond this point 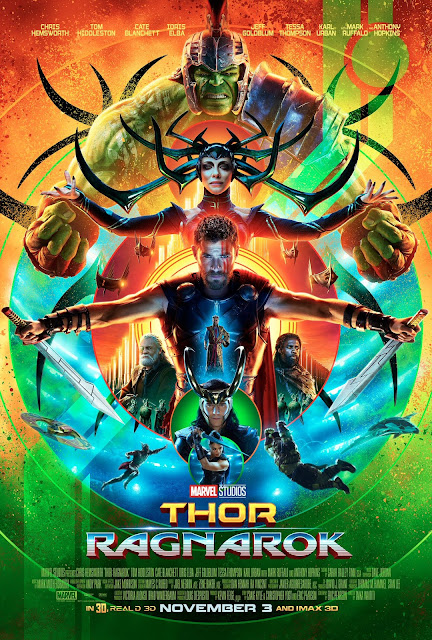 From the opening sequences the tone is noticeably lighter, or as light as you can be when dangling in a cage in front of a hundred foot tall fire demon anyway. Thor has become one of those cheeky irreverent sort of heroes and it suits Chris Hemsworth who always struggled with the more serious lines he used to be given. The outcome of this encounter sets the tone for the rest of the film. When he gets back home Thor finds everyone watching a play based on his previous adventures. There’s some surprising cameos there but the whole thing is played for laughs even though it culminates in the unveiling of Loki. Even the latter has become more of an agreeable presence though duplicity is never too far away.
Thor forces his wayward brother to track down the real Odin and when they find him it transpires that the old man- now prone like Luke Skywalker to stare at the sea- is dying (not sure why) and when he does it conjures up  his hitherto unmentioned first born Hela. She certainly knows how to make an entrance and makes short work of sending her brothers into a void and then zooms off to claim her throne.

Taking Thor out of his comfort zone works wonders for the film. With his hammer gone (it was always a bit silly) he’s forced to use alternative resources. He ends up on a brightly coloured world where the Universe seems to deposit its rubbish but which also, oddly, can afford to host grandiose gladiatorial tournaments. It’s a shame the trailers gave away one of the best gags (“he’s a friend from work”) but there’s plenty of amusement to be had from a permanently Hulked out Hulk and Thor coming to both physical and verbal blows. Stuck together in a sort of apartment this section reveals a more talkative Hulk than you’d expect as well as showing Hemsworth’s talent for physical comedy. Also having fun is Jeff Goldblum who has never been more Jeff Goldblum than he is as the Grandmaster droll and yet menacing yet delivered in a fey voice and sporting a blue stripe on his face. Its easy to imagine he didn’t even need to change when he got home.
As ever Loki’s presence also adds to things and this time round his slippery mischief is once again well deployed by Tom Hiddlseston. There are a couple of other interesting new characters; Tessa Thompson’s  hard drinking Valkyrie is great as she gradually thaws from being bitter and hiding away to joining `the team`  while a rock creature with a surprisingly casual attitude is voiced by the director Taika Waititi himself and gets some very funny lines. This part of the story is brimming with interesting pair ups, action sequences and a vivid location. The eventual transformation of the Hulk back into Bruce Banner drives the film through it’s most frivolous section with Mark Ruffalo completing a group that are every bit as engaging as those Guardians of the Galaxy. Just wait till you hear the name given to the vortex through which they have to escape! 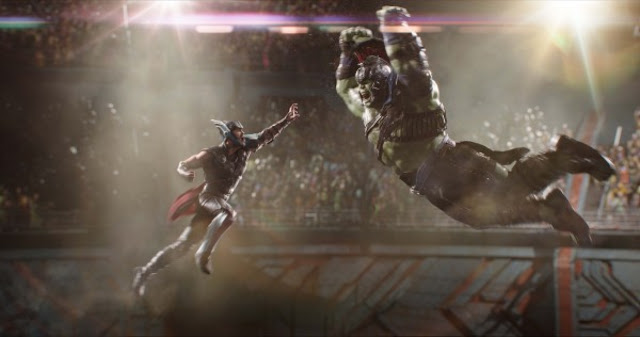 As other reviewers have already pointed out the film does tend to boil these returnees to their basic constituents losing some of the deeper attributes. This is especially true of Ruffalo’s Banner whose performance though amusing is akin to a sitcom version of himself rather than the troubled soul we’ve previously encountered. There are times when the combination of humour and special effects makes the whole thing seems more like a parody however the nifty script and assured direction always stops it going too far.
Back on Asgard matters are inevitably rather more sluggish and serious though Cate Blanchett – rocking black antlers no less- is a riot as Hela who is inevitably more powerful than all the all- powerful enemies we’ve seen to date though she shares the same variable depending on the plot powers. Her performance is arch enough to work though the character has to mark time by striding around the place until the two storylines to meet. The revelations of her history are delivered courtesy of a clumsy scene in which a series of hidden paintings are revealed to handily fill the audience in that she also has an army buried down there as well. Idris Elba is around to save lots of people but his strand is given little time while Karl Urban’s Skurge seems to have been created just to give Hela someone to talk at. His eventual turning back to the good side is obviously going to happen and you can predict the moment it will.
Remarkably the levity does not detract too much from the serious matter of Asgard’s fate though you feel there is some empathy missing for the civilians who are herded about like cattle and seem to have nothing to say about it. There isn’t even a token spitting peasant who defies Hela! Despite a familiar reliance on computer effects, the final confrontation is impressive with interesting colour tones and some rollercoaster action combining well plus an unexpected ending. As for that big spaceship - does this mean Loki took something from the basement? There are clearly more serious issues that will follow on from the development in this film not least the question of what to do with all those Asgardians.
By taking risks with both its main character and setting, Thor Ragnarok reaches the high standard set elsewhere in the Marvel Universe and is hugely entertaining as a result.
Oh and the 4D version is even funnier... Thor Ragnarok 4D