Being Christopher Nolan there has to be something different and here he chooses to show three separate but connected scenarios each representing what is happening on land (the beach evacuation), at sea (one of the civilian rescue boats headed out from England) and the air (a pilot’s pursuit of a deadly German rival who is bombing ships). The triple time frame also suggests the endless drag of war and how it makes one day to the next seem irrelevant until it becomes a terrible way of life.  It takes a short while to get your head round this because we move from day to night and back again but the thing to do is read the opening taglines carefully which explain the different timespans. So the beach scenario seen through the eyes of one soldier takes place over a week whereas the air action takes just an hour while the boat trip is a day. Yet each of these are woven simultaneously through the narrative eventually combining so that something we’ve seen in the distance twenty minutes ago suddenly becomes the up front action we’re watching now. 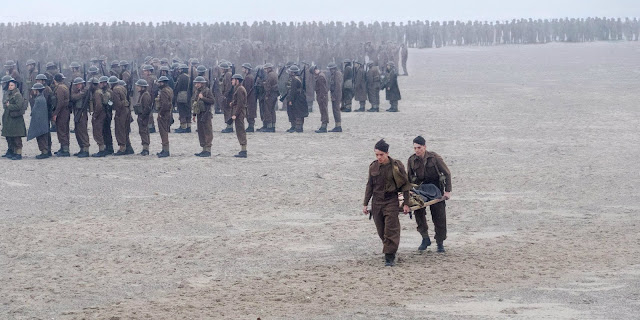 From the opening scenes you are left in no doubt that this is not going to be a film with conventional heroes and indeed it suggests that the sort of acts we often associate with heroism are no more or less than the human nature of trying to survive. Thus it soon becomes clear Dunkirk is as much of a thriller as it is a historical war movie.


The opening is surely destined to become a classic. A group of young soldiers meander through the town while leaflets warning them how isolated they are fall from the sky like snow. The next minute the most thunderous noise signals gunfire that cuts all but Tommy (Finn Whitehead) down with a savage randomness that also splinters wood like it is paper. This mesmerising start starts the clock ticking and it never stops. Few war films show the weapons to be as dangerous as this without incidentally showing much blood at all. We follow Tommy back to Dunkirk beach where thousands of soldiers are queuing up to leave on destroyers. It’s both surprising and very English to see such orderly behaviour in a way you couldn’t imagine people doing now. Tommy may be more of a symbolic representation than an actual person. It’s hard to recall a film where the ostensibly lead character gives nothing away instead simply trying every method to escape from the scenario. Alternatively what Nolan may be thinking is that war dehumanises people so it doesn’t matter what the names or histories of these soldiers are because we don’t learn them. 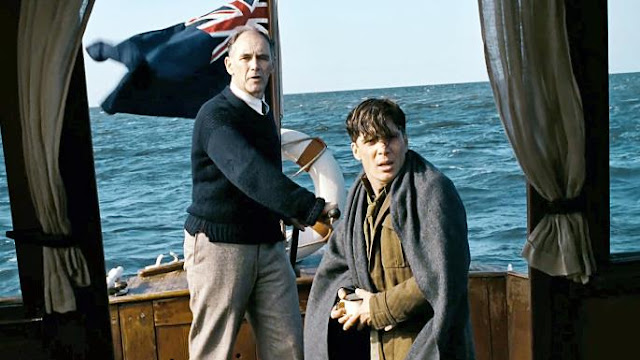 Nolan’s camera captures faces as it goes- they are frightened, resigned faces alright. Even the officers- lead by Kenneth Branagh’s stoic Commander Bolton are helpless. “You can almost see it from here” one of them says, “Home.” Meanwhile we meet Mark Rylance’s Mr Dawson a quintessentially English man taking his boat out to rescue survivors with his son and a friend. Their story takes in one of war’s more personal effects when they along the way they rescue Cillian Murphy’s shell shocked soldier whose presence will lead to tragedy and afterwards an understated gesture of kindness. The third strand follows Tom Hardy’s RAF pilot and his dogged pursuit of a deadly German plane that is causing havoc in the sea below. How all of these stories come together is something you need to see for yourself.


The cinematography by Hoyte van Hoytema is divine. Referring to Hans Zimmer’s score as incidental music seems an understatement as there is nothing incidental about it. Mixed in with the frequently thunderous sound effects it acts more like stopwatch clicking away towards doom. This metronomic soundscape keeps beat with the action speeding up as tensions rise- a race across the beach carrying a stretcher is achingly desperate – adding to a cacophonous soundtrack that makes the IMAX seats shake. Occasionally Zimmer eases back to a more fluid near conventional score but its not until the final minutes when he seamlessly and ingeniously weaves Elgar into the electronics to essay the powerful conclusion.  Zimmer has said that the score uses something called the shepard tone described thus: “a middle octave scale at constant volume, a top one fade out and a bottom one fade in, tricking the brain when played on loop and creating a sense that pitch is only going up and up up and up and up.”


Dunkirk then doesn’t follow the pattern of other war films even if some of the visuals are familiar. Yes, ships are torpedoed, planes downed, soldiers strafed with bombs yet Nolan makes these as visceral as possible with the combination of sound, vision and Zimmer’s ticking music creating as tense an experience as I can recall seeing at the cinema. Some scenes are so claustrophobic you want to look away even though you know it is all staged. The use of as many actual physical props as possible adds to this feeling of authenticity. Though it feels relentless it is also thrilling and by the end you realise that heroes are not the archetypes we’ve seen before in films like this. They are ordinary people doing their best.

The other interesting take is that the dialogue is kept to an absolute minimum and what’s more it feels absolutely right that it does. What, really, would anyone say in such a situation? It makes other war films with their verbosity and heroic speeches seem fake, as if they’ve been made that way to spoon feed an audience with beats they expect. Dunkirk largely avoids what we might call a Hollywoodisation of the situation. There are no breakaway shots of families at home or officers in dimly lit offices. Instead we follow nothing but the unfolding situation.


It is an unconventional approach as we’re all familiar with war film clichés in which the soldiers share that single bar of chocolate while talking about the girl back home, their mum’s cottage pie or how the generals don’t care about them and so on. Here, their comparative silence speaks volumes because you can see how terrified they really are. It feels like they are afraid even to say too much lest they reveal it to the others. The narrative also homes in on the selfishness that often gets ignored. Several times a character will do something for their own ends even at the expense of others and this is fluid. Even Tommy’s attempt to get on the destroyer near the beginning is just a massive act of queue jumping! Later in a tense scene in a boat being strafed by bullets the selfishness of all concerned surfaces. All the way through you’re thinking- how could people survive all this. 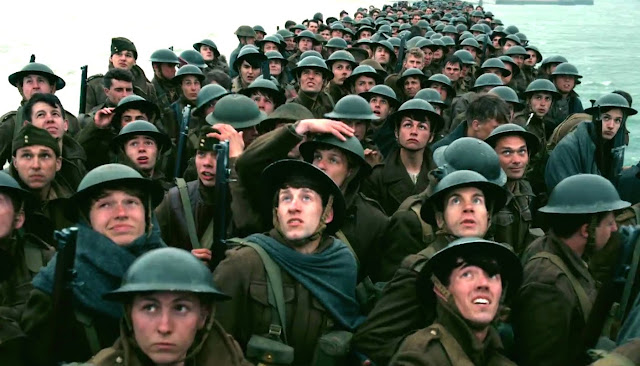 Just when you’ve reached peak edge of seat, the film turns on a tuppence to offer a warmer ending remembering of course that though this was a defeat in another way it was a stunning achievement to get so many soldiers off that beach. So when the emotional scenes kick in they have triple the impact especially one moving scene involving Kenneth Branagh’s commander spotting the civilian armada approaching. That one’ll get everyone!  The relief on screen and in the audience alike when some of the soldiers we’ve been following make it away and are back home in England is like we’ve won the war.


Often when you’ve seen a film you’ll talk afterwards about the best scene but with Dunkirk the atmosphere means there are too many to choose from. Aside from those mentioned above, I’d have to highlight a sequence when Tommy and another soldier are racing with a stretcher to get to a departing ship, when the rescued soldiers are trapped on a sinking destroyer, Nolan’s plane sided views of the aerial combat and the early attack on the beach as soldiers dive for cover and those explosions get nearer and nearer to our camera view.


Dunkirk is an immersive, absorbing often tense, sometimes exhilarating cinematic experience that you must see! 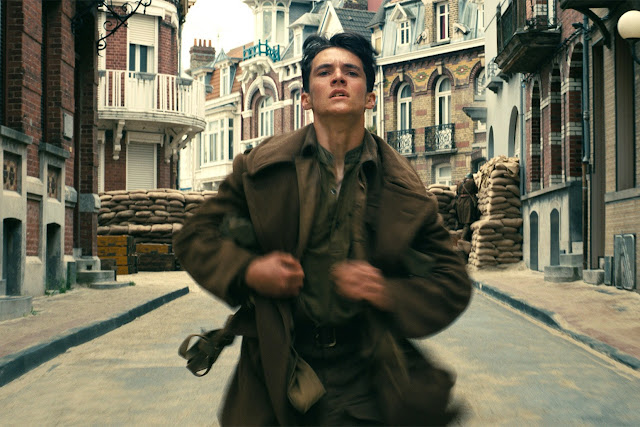