Reviewed by Chris Arnsby
Simon Bates: "Looks like being a good Thursday night on Top of the Pops.  We've got Queen and Roxy Music and Duran Duran and so many more. Kicking off though with this lady down here a new version of an old song called Iko Iko. The lady in the blonde hairdo and not much else is Natasha.
[24] Natasha: Iko Iko. Simon Bates' comment about Natasha not wearing much seems unreasonable. At first. She's obviously wearing a perfectly acceptable little black number. Then Natasha bends her knees slightly and it's clear that she's only one low-angle camera away from an outraging public decency charge. But enough of this sexist nonsense. What you all really want to know is, what are the video effects like? Very nice is the answer. There's a mix between shots which involves the picture breaking up into tiles. And a round of applause for the old Quantel standby of dividing the screen in four with each quarter showing a different picture. (Fact John- Natasha’s full name is Natasha England but she’s Scottish. She was in a group called The Flirts. She is now 64 and probably doesn’t dress like this any more…) 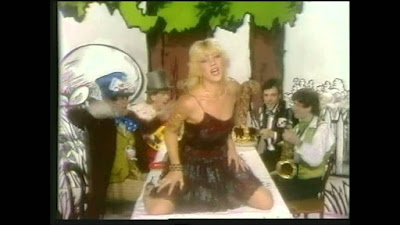 [4] ABC: The Look of Love. Vision Mixer Carol Abbott likes the tile-effect wipe because she uses it again to transition into the video for The Look of Love. I don't think I've seen this video before. It's odd and a little too arch. ABC look great wearing twenties style boating blazers and straw hats and they are larking around in a deliberately studio-bound park set but what jars is the humour awkwardly laid on top. Some of it evokes picture postcard humour; a man appears to be painting a woman's bikini until it's revealed to a be a trick of perspective and he's actually painting a sign. Some of it is just odd; why are two members of ABC dancing in Lederhosen? 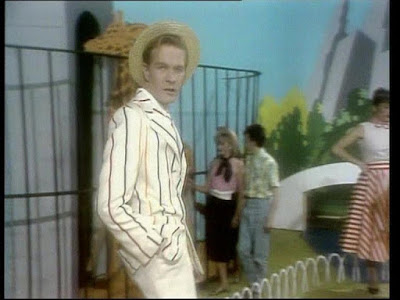 Why does Martin Fry have a budgie on his shoulder (which gets a big close-up on one "look of love")? Some of it is gross; a man covered in spaghetti who is frantically shovelling yet more spaghetti down his gullet; the sign painter pulls the most unpleasant phwoar-crikey face this side of Robin Askwith. And some of it just falls apart because I've now spent too long thinking about it; a couple sitting on a bench don't see a Wet Paint sign right next to them because Martin Fry is obscuring the sign from the camera. What?
(John- I Googled `tile effect wipe` and got this picture. Google doesn’t know everything) 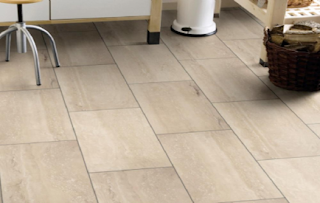 [33] Roxy Music: Avalon. Brian Ferry squints and grimaces at the camera while swinging his lower arms freely and keeping his upper arms pinned in place. He moves like Cliff Richard Junior from Thunderbirds Are Go.
[33] Bow Wow Wow: I Want Candy. Lead singer Annabella Lwin is just a few weeks away from appearing on B.A Robertson's not short-lived enough programme B.A. in Music  and describing it as a "pretty shit show."
[32] Queen: Las Palabras De Amor. As far as I can tell (30 seconds of "research" on Google) Queen last appeared in the Top of the Pops studio almost exactly five years ago; 16/06/1977 with Killer Queen. That performance -like this one- was recorded earlier in the day with no audience present. It looks like you might have to go all the way back to 1974's Seven Seas Of Rye to find the band playing in front of an actual Top of the Pops audience. Roger Taylor had something of a downer for the show which might explain this disdain. "I used to hate Top Of The Pops. For one it was a crap show, with lots of crap acts on it miming badly and two, it was a really long boring day and it used to take all of your iron will not to get completely pissed!" he says in one unattributed quote.
[3]Charlene: I've Never Been To Me. I've clocked up three curse words while describing the last two performances on this edition of Top of the Pops. Can Charlene stop this from turning into the new Tropic Of Cancer? No she can't. Instead she shocks the early evening audience by dropping the word whoring right between World Cup Report (18.50) and Fame (20.10).
At this point BBC4 have snipped out a European chart round-up showing the number 1s in Sweden, Nicole -A Little Peace; Finland, The Human League -Don't You Want Me (keep up Finland that came out months ago), Switzerland, Trio -Da Da Da (see Finland, the cuckoo clock obsessed Swiss are actually ahead of the UK ); Italy, Phoebe Cates -The Theme From Paradise; Holland, Boys Town Gang -Can't Take My Eyes Off Of You. Editing like this normally indicates the presence of someone unacceptable but it's possible that money conscious BBC4 just want to avoid showing the video for Paradise, because it's full of clips from the 1982 film no one remembers.
[9] Gary Numan: We Take Mystery (To Bed). Gasp in amazement as this promo film shows Gary Numan driving around in the daylight. Outside! Sit down in shock as his face cracks in a smile at being exposed to this new world of sights and colours. Still all good things must come to an end and he's quickly ushered back inside before he becomes overstimulated and cranky. Gary Numan treasures those memories of that brief trip into the sunshine (he calls it "the brightworld") and one day he hopes to return. 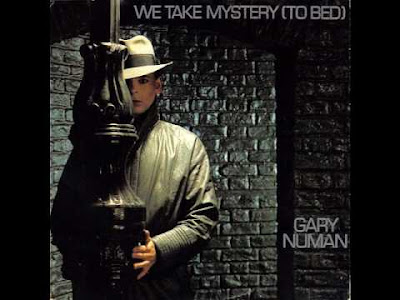 [6] Duran Duran: Hungry Like The Wolf. It... everything's purple again. Hang on a minute *fake edit* This performance is a repeat from the 13/05/1982 edition presented by D*v* L** Tr*v*s and who do you think did the lighting on that show? It was the prince of puce himself Fred Wright. Maybe this lurid colour scheme was his way of making a mark on the programme? The difference between this and the rest of the show -sensibly lit by Reliable Ron Bristow is noticeable.
[21] Toyah: Brave New World. Mind you Toyah's video is equally bad for the eyes. All glowing neon and shocking colours {Eddie Large}And that's just her hair!{/Eddie Large}.
19] Echo & The Bunnymen: The Back of Love. Last time Echo & The Bunnymen had to deal with a distracting clot on stilts in the audience. This time they turn in a perfectly acceptable performance.
[1] Adam Ant: Goody Two Shoes. In Adam Ant's autobiography Stand & Deliver (natch) he talks about his big three-stage performance of Goody Two Shoes on the 20/05/1982 edition of Top of the Pops. "I designed three different sets, and outfits to go with them." Sure you did Adam. Scepticism aside it's surprising to see the Top of the Pops keep defaulting back to using the video, rather than repeating his big studio spectacular. Maybe they felt it made the repeating of old performances too obvious?
Posted by John Connors at 23:02