The 7th Voyage of Sinbad


Released this week is a limited edition box set with both DVD and blu-ray formats are three Ray Harryhausen Sinbad films together with lots of extras. The trio are undeniably popcorn classics with pioneering effects for the time they were made. I certainly remember seeing the second and third of these back in the day when we had a local cinema. The 7th Voyage of Sinbad is the earliest and least familiar though it’s been on TV many times. By today’s standards this 1958 movie is rather creaky though its not the legendary special effects that have dated half as much as the acting and plot. Nonetheless it has the sort of thrills and spills that would have entertained audiences in a time when most comparable films tried things like superimposing ordinary sized lizards over the picture to make them look huge. Trouble was they just sort of sat there. By contrast Ray Harryhausen’s stop motion animation- known as Dynamation- makes the creatures much more entwined with the action and it is this aspect that ultimately makes the movie watchable. 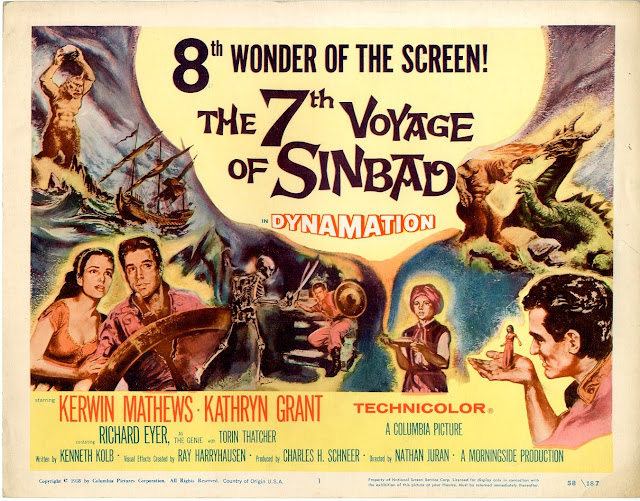 Mind you modern audiences will have to take a deep breath because some of our more enlightened and advanced filmmaking elements are nowhere to be seen sixty years ago. Despite the Middle Eastern setting our hero, his princess, her father and even the Genie of the Lamp are all resolutely white Americans with fake tans and sporting Arabic silks. Princess Parisa fits the old female stereotype of being helpless an attribute given a literal interpretation by having her shrunken and carried about in a box while everyone else gets to adventure away. The antagonist Sokurah has variable powers depending on the situation and is portrayed with the sort of large performance often associated with pantomime. His co- stars deliver lines with an urgency that is designed to propel the plot rather than give us any insight into who they are. 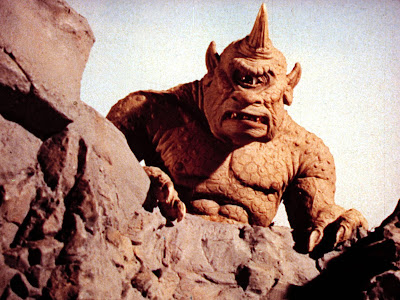 Given that it’s his film, Sinbad is rather bland the actor Kerwin Matthews seemingly selected because he was good at interacting with things that weren’t there on set. A shame he wasn’t anywhere near as good reacting to those who were present. Future Mrs Bing Crosby Kathryn Grant is actually better than her role making the most of her limited options with an open performance. Torin Thatcher’s Sakurah seems to shout all his lines with a gravelly voice though looks like he’s having more fun than Matthews.


The plot jumps right into Sinbad’s latest voyage (presumably his sixth) without any introduction for viewers who may not know who he is. On the mysterious (aren’t they all) island of Colossa he encounters the magician Sokurah fleeing a Cyclops and during the ensuing fight a magic lamp is lost. Quite why a magician who later is shown to have considerable powers needs a Magic Lamp is not clear. Anyway he goes back with Sinbad to Bagdad for the latter’s wedding to the Caliph’s daughter Princess Parisa. Here after his demands for a ship to go back to Colossa are turned down he covertly shrinks the princess so that Sinbad will be forced to go back as the cure for the spell is a piece of egg belonging to an Orc. The fact he knows this barely raises an eyebrow of suspicion though.  Even more amusingly the princess’ father immediately blames the Caliph for Parisa’s predicament rather than the magician whom he saw turn someone into a blue snake the previous evening! It’s a good job he’s not the chief of police! 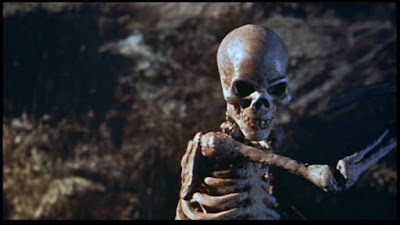 Of course all this is just to enable the maximum encounters with monsters and much of the film’s running time is made of these set pieces. For the late 1950s they were a breakthrough often cited by modern effects people as an inspiration. They still pack a punch now even if the picture does noticeably change its palette whenever one of these sequences starts. The interaction and perspective between the sailors and the creatures is very well achieved and often close to seamless. CGI has of course provided the one thing stop motion could not which is life like skin and hair movement but the action is so speedy here that you don’t even notice its absence.


The best realised scene is the famous sword fight skeleton which is neatly accompanied by percussive music. The Cyclops is also impressive though having it go into the sea is a mistake as it shows too clearly the composited picture. On land however it’s fearsome and surprisingly mobile. A sequence in which Sokurah turns the princess’s hand maiden into a blue skinned snake thing is also very impressive with a fluidity that would be further developed in Harryhausen’s later films while the two headed giant Orc’s tussle with the sailors is surprisingly brief but effective.  You do expect it to come back but it doesn’t. Though less showy the shrinking effect is very well carried off looking convincing in all aspects apart from the fact that Parisa’s voice remains at normal volume- surely it should be squeaky! The only monster that’s less effective is a dragon chained up underground guarding Sakurah’s lair which is more down to the design and scenario plus the fact it doesn’t belch nearly as much fire as it should.


In common with a lot of action films of this era nobody ever seems bothered either about fatalities or the incredulity of what they are witnessing presumably because it would waste time. It does mean that the narrative feels like a series of set pieces between which the characters rush yet it this breathless momentum that carries the viewer through the rough spots. You can’t take it seriously but there’s something enormously fun about this adventure despite its shortcomings and if you enter into it with that spirit you’ll enjoy the chase.
Posted by John Connors at 22:07