The zombie genre has had a lot of attention in recent years. From big screen outings whether serious (World War Z) or comedic (Cockneys Vs Zombies) to television shows like The Walking Dead and even books. The focus though has been on trying to turn what appears to be a one gimmick thing into something deeper. All of the examples mentioned and others have found surprisingly subtle or amusing social commentary in the idea of a zombie plague of some description. Yet most are set in a decaying or destroyed civilisation; zombies and decaying buildings seem to go together. What In The Flesh does is try and place the idea in a recognisable contemporary setting where civilisation has not fallen or been over-run by monsters (at least not of the undead sort) and people have to find a way to live with the changed situation. In that respect it has more in common with dramas set in the hinterland of a war, massacre or pandemic. Has the world changed that much and does what has happened bring out a darker side to those still alive? How do you cope in the aftermath of a life changing illness and what you would do if someone you had loved did come back from the dead.
Episode One opens in an alternative contemporary England some three years on from an unexplained, for now at least, event called the Rising in which the recently deceased rose from their graves and wreaked havoc until they were contained. Mitchell’s first strong move is to make the scenario as much a comment on government responses as anything. The glimpses we get of the aftermath show how even something as potentially apocalyptic has been dealt with by a combination of medical treatment and neat names.  There’s even a smiley poster of the type you often see in hospitals. So while people might refer to these undead as “rotters” or worse, their official designation is as sufferers of Partially Deceased Syndrome or PDS. Quarantined and given powerful suppressant drugs those that are deemed suitable will eventually be released back into the community. It is a scenario rife with possibility and despite what appears to be slow pace Mitchell is almost rushing to pack much into the opener of what is a brief three part first series.
The first episode focuses on Kieran Walker, a teenage suicide who suffers enormous guilt twice over- one for the fact that he took his own life and again for the girl he killed when he was awakened. Much of the episode deals with his return to Roarton, the small village where his family live and which is rife with paranoia and fear. It is here that the first Human Volunteer Service (HVS) started because of the feeling that the government did not do enough for Northern areas affected. Sounds familiar. Worse still Kieran’s sister is a member of this vigilante force. So he has to be sneaked back home, literally having to hide under coats in the back seat as his parents’ car returns.
Director Jonny Campbell emphasises the discomfort Kieran feels in somewhere as familiar as his own home. Trinkets and traditions that might otherwise be seen as warm and happy are suddenly cold and uncomfortable personified by a dinner in which Kieran is encouraged to pretend to eat even though in this condition he no longer needs to. PDS sufferers are given skin tone cream and contact lenses to make them blend in more; for these actor Luke Newberry simply uses his own rather remarkable eyes that gaze mournfully at each situation. The tension is up front continuously as every knock or ring on the door signals potential danger.
The series underscores in frightening terms how quickly people’s attitude towards each other can change. This is something we see in the news whether here in response to some public outcry or in countries where sectarian divisions turn former neighbours into enemies almost overnight.  In a stunning moment that occurs about five minutes before the end of the first episode this is vividly depicted when news spreads to the HVS that a PDS sufferer is in the village. The Walkers think it is their son who is being sought and arm themselves- Mrs Walker rather surreally with a chainsaw- but it turns out to be the already seen Burtons, curtain -twitchers living opposite that find themselves at the sharp end of summary justice, Kieran has to watch from opposite as Mrs Burton is shot in the street. What we don’t quite realise at this juncture is the added personal connection for him in that the man who does the shooting is Bill Macy whose own son was Kieran’s best friend and maybe more. What Mitchell then unveils- that Rick Macy assumed dead in combat and the reason for Kieran’s suicide- has been found and is himself now a PDS sufferer – means that the opener ends on a must-see high. Fear and prejudice in this rural community is the tone of the first episode but one of the strengths of the series is that each of the trio has its own theme. 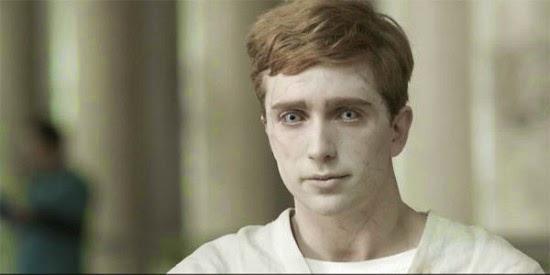