Well 2013 has been the Time of the Doctor hasn’t it? So what better moniker for the year’s- and Matt Smith’s- final act especially as it deals with the passage of time, how it changes us and how we should stay true to who we are. The production also wraps up the remaining questions of the era so that we now know who blew up the Tardis and what the Silence were up to. There is a fair amount of repetition of some of writer Steven Moffat’s favourite things, but in the end the story manages to deliver both an enjoyable Christmas Day adventure and a satisfactory conclusion to the latest Doctor’s story.


`The Doctor Stays for Christmas` could easily have been the more festive title option or perhaps `Silence Will Fall`. Once again Moffat has tricked us with mis-direction and here is where he explains it all in what is, surprisingly, a straight forward enough narrative. A signal has been beamed across the Universe from a planet that you and I know is Trenzalore and brought masses of alien races to come see. Well, the four or so available races from the costume store anyway. We soon discover the message is the famed “Doctor Who?” refrain with which the missing Time Lords wish to confirm their new favourite Time Lord’s whereabouts. It boils down to a simple dilemma; if he answers they will re-appear and the Time War will effectively re-start. So he has to stay and stop the prospective invaders wreaking havoc over the simple people of Christmas, a town where no-one can lie while refusing to answer the question.
It’s an intriguing idea, though Moffat is a little woolly over the whys; for example how could the Time Lords actually pop back through the hidey hole 12 Doctors managed to construct last month? And why would they? After all they were happy enough to accept the idea. It doesn’t matter too much but as Moffat is being so neat and tidy about everything else, a line of dialogue could easily tell us. Where he does deliver though is in tying together various unanswered queries from the past three years, often in the space of a sentence. It’s neat, clever and never burdens the action.
We’re becoming increasingly familiar with Moffat’s favoured tropes and once again we have the companion abandoned though Clara is not required to sit under Stonehenge for centuries nor is she forced to survive a lot of annoying robots. For good measure she’s left behind twice but it’s worth it because it finally allows Jenna Coleman to shine. For all the reams of plot about `the impossible girl`, she has been the least robustly written companion of the whole post 2005 reboot but finally we get to see what she can do and it’s so impressive you wonder why they waited so long. We also have the Doctor embarking on a vigil of his own following a River Song- like flirtation with the female head of the Church of the Papal Mainframe. There’s even a wooden Cyberman though I’m not sure of the wisdom of arming it with a flamethrower!

The general amount of explosions and firepower is impressive and there’s a terrific sequence where the Doctor and Clara are menaced by Weeping Angels emerging from underneath the snow. A perfect blend of comedy, threat, scares and action which means that TOTD works equally well for less committed fans, something that perhaps could not be said of `Day of the Doctor`.
Course, its Matt Smith’s episode and he owns it as you might expect. If some of his tics can be irksome at times, there have been moments when he seems the most alien, unexpected Doctor since Tom and he delivers a tour de force for his finale. That his best and most emotional scene comes from talking to a Cyberhelmet says a lot about the actor’s ability to bring anything alive. His last hurrah is audaciously staged though not without its questions. If he fires at the Dalek ship with regeneration energy how come it blows it up? I had the same query when David Tennant left and the regen energy blasted half the console room away. Isn’t it supposed to be positive energy, something that only heals?
That niggle aside the final scenes pack a punch that move on from the self -obsessive Doctor that his predecessor had become with a farewell address that was as much to us as it was to Clara. Then with a sudden lurch that sort of personifies Matt Smith’s gangly movements, he is gone and we have a new Doctor more surprised by his kidneys than his legs! Like the equally enormous `The End of Time` I suspect the years may unpeel some of the attraction of this story which is so loud and busy that it’s often hard to see the intent but for now it’s a great romp packed with highlights. 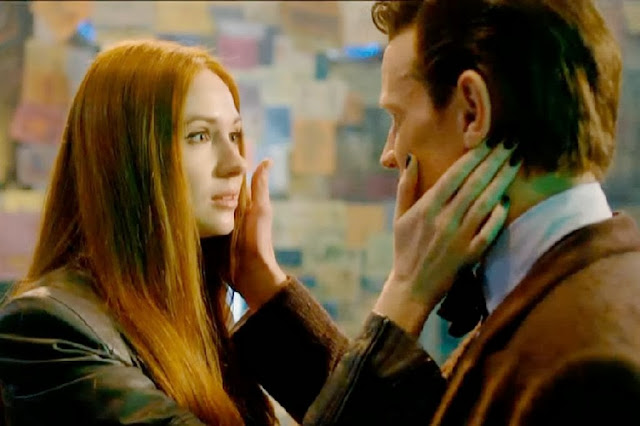