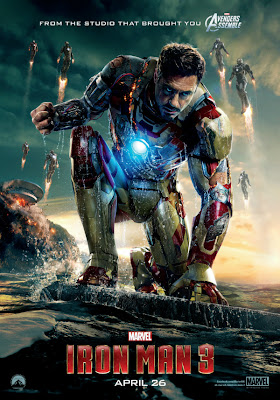 The consensus seems to be that last year’s collective Avengers Assemble caper was better than each of its heroes’ individual movies but that of those Iron Man was the best. Despite some slightly mixed reactions to Tony Stark’s second film there can surely be little doubt that with Iron Man 3, the Marvel juggernaut has produced its most enjoyable and intelligent film yet.  This is everything you might hope for from an Iron Man film – and more. While packed with expected, yet inventive, set pieces IM3 manages to maintain both a heart and a sense of its own absurdity. In particular writer Shane Black delivers brilliant twists on a couple of rusty old action movie clichés. Two and a bit hours flies by and leaves you wanting more. Surely they have to do a fourth?

The premise approaches the audience from two sides. On the one hand we are in Tony Stark’s head and he isn’t sleeping, Instead he tinkers endlessly with versions of his suit all the while trying to avoid thinking too much about the events of New York. Meanwhile a super terrorist called the Mandarin is setting off explosions here and there, gradually drawing the attention of the authorities while seemingly having some personal connection to Stark. The plot is not complicated but it slides seamlessly into place, building to several climaxes, each one more impressive than its predecessor.

The scenario slows Robert Downey Jr to deliver another top notch performance. He gives Stark the sort of personality rarely seen in these kinds of films. Yes he is troubled but his brooding is intercut with quirky asides, observations and a deep line in sarcasm.  Every great hero deserves a great villain and here we get two..sort of. Guy Pearce is in chameleonic form as Aldrich Killan whose anger at Stark’s disinterest in his project when they met fleetingly 12 years earlier has sparked him to complete it. Now he can literally make people explode courtesy of implants that make them volcanically hot.

Then there’s The Mandarin, trailed already as the Bin Laden lookalike supervillain which works very well but there is a terrific twist that it would be too spoilerish even to reveal here but which unleashes Ben Kingsley in a totally different –and ultimately more satisfying –direction.  It’s that sort of film actually; there is another significant development when Stark team up with a kid that sparkles by subverting the sort of things you expect.

Throughout the film is funny one minute then deadly serious the next. In that respect the rather serious trailer misleads because it is in its humour that Iron Man 3 ultimately triumphs providing an entertaining, thrilling and satisfying movie.
Posted by John Connors at 20:11