Doctor Who: The Name of the Doctor

In a series ending that showed how that whole Bad Wolf thing should have been done and once we got over the disappointment of the title not being an obscure Black Grape reference, `The Name of the Doctor` gave a rousing conclusion that was as full of emotion as it was with continuity going back through 50 years of adventures in time and space.... 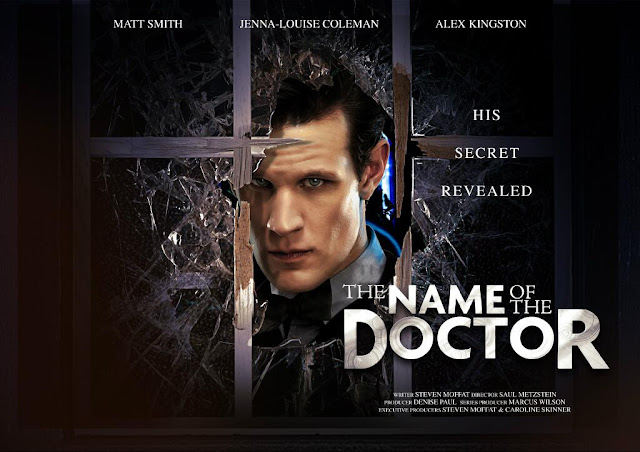 It was hardly likely Steven Moffat was going to actually give us the name of the Doctor, especially now American Amazon’s Blu-ray distribution system has taken over from obsessive fans has his bête noire. Many of us had already inserted an “In’ into the start of the episode title, but even so the episode provided a ride that seems (according to my highly unscientific sampling) to have pleased both fans and casual viewers alike. That’s quite impressive for an episode so full of fan service and references to the past.


On reflection, it was also rather inevitable that this would be even less of a concluding episode and more the first part of the 50th anniversary story. Despite the final reveal having been floating around on the ether for the last few weeks (I had the idea of a missing Doctor in my head, despite trying hard to avoid spoilers), the twist at the end of the episode was still a thrill. What was also satisfying was the way it brought in elements from the previous episodes and gave them a new significance. Perhaps some of them felt semi-detached at the time (the refrain “I don’t know where I am”, the -pun intended- leaf motif, the exchange that never was with Clara in `Journey to the Centre of the TARDIS`), but they were all elements needed in this story. The lost souls stolen by the Great Intelligence in ‘Bells` were echoed by Clara herself as she followed it into the Doctor’s time-stream. The leaf was essential as the focus of the original Clara, to help bring her back into one place and person so he could rescue her. The exchange had to be remembered in order that Clara would be motivated for her sacrifice. Lovely.

But “thrill” was my reaction to most of the episode. The pre-title sequence was quite lovely, and its flashbacks were about the only sensible way to reintroduce the classic Doctors into a new story.  So good in fact, they showed it (in part) multiple times (and another version with the Great Intelligence inserted), but it still did not get tired, and at least explained why the Doctor did not remember her despite her presence throughout most of his life to date. (Characteristically, he usually never listens.)  The Paternoster gang plus River played nicely both has the comic relief and as the motivation for the Doctor’s travels to Trenzalore. I am sure they could all become tiresome if used too often, but for now they are yeast to this cake (or perhaps the whisk to this soufflé?) Jenny’s tear as she was murdered and Vastra’s violent grief in response were beautifully played. They also nicely illustrated the dreadful consequences of a Universe in which the Doctor always loses. The Whispermen were a nice threat, if a little derivative of other fantasy creatures such as Buffy’s gentlemen, and the recurrent rhymes throughout the episode are one of the Moffat tropes that could happily be used more often.


The biggest surprise was what an emotional story this was. Moffat is often accused of being all plot and no heart. There is an element of truth to this, although it sits oddly with the other accusation that ‘love always saves the day’, but this episode gave enough plot to be satisfying in story terms while having real emotional beats, both for the nostalgic fan and for the viewer. If we have seen the last of River (I’m not so convinced, but it would make the space needed for the Doctor to relate to others, like Clara), she had a nice send-off, and there was something quite touchingly realistic about the Doctor’s closed-off emotions spilling forth. She was far from shoe-horned into the plot, as she was not only needed for to resolve the strand about the mystery name of the Doctor without a big reveal, but also to allow emotional closure to their relationship that would otherwise block new relationships for the Doctor in the future.

Uneasy notes? I am never a fan of magic in the series, and I had a slight resistance to the dream conference call, but then I remembered that this is a series that happily embraces telepathy and (brace yourself) time travel, so this was not a matter of magic potions. A slightly more subtle bit of apparent magic was the Doctor being able to see the projection of River. Some might over-interpret the line that “he can always see her”, but I take that as a simple statement that would be understood by anyone who has lost a loved one. My take on her visibility is again telepathy; River is tied to Clara, and Clara is tied to the TARDIS telepathic circuit, so the Doctor sees her by that route. I suspect there may be more to that connection to come. 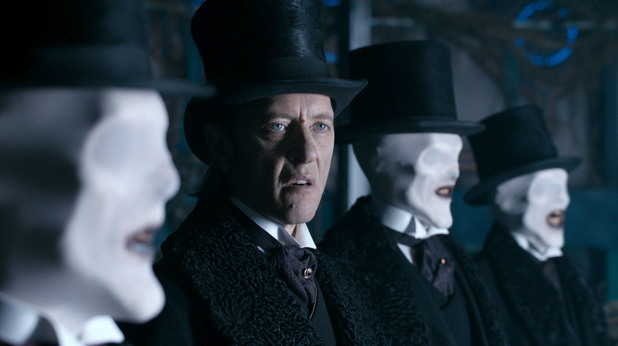 So on balance, the only truly duff notes in the episode for me were a slightly clumsy edit between the Doctor and Clara being in the catacombs and then appearing with the gang in the TARDIS/grave; and a slightly rushed motivation for the actions of the Great Intelligence.


As to series 7B, I have generally loved it. The episodes have consciously echoed previous eras without being slavish reproductions. Moffat set things running well with his most RTD script yet, the Bells of St John, which was a romp (and for my money far better than `Smith and Jones or` Partners in Crime`). Mark Gatiss has finally shown himself to be a reasonably consistent writer for the show after previous highs and lows, with a great homage in `Cold War` and a lovely penny-dreadful-meets-Hammer approach to `The Crimson Horror`. `Rings of Akhaten` had much ambition (and an admirably rationalist agenda, though was slightly let down in the story telling. `Hide` was a lovely mid-70s story in more ways than one, with some scares, nice character notes – and no, love did not save the day, though there was a lot of it in the air. `Nightmare in Silver` allowed an element of the dark fairy story into the show (and for those who think the Cyber men were ill served, will they seriously argue this was worse than any of the other colour Cyberman stories other than `Earthshock` and possibly `The Five Doctors`?)

What could have been done better? I would have said in two cases a little more re-writing (`Rings` and `Nightmare` – Neil Gaiman is a great novelist, but as `The Doctor’s Wife` showed, he benefits from a long gestation period for the script and significant input from Moffat.) I think some stories would benefit from more space to breath, either in longer episodes or more two parters. The sound mix remains a problem for those of us over 45, and I guess you can always do more on the effects (although I have always argued a good script outweighs any number of flashy graphics.)

In all though, this is one happy fan – and despite rumours to the contrary, the ratings seem to confirm it. The Audience Appreciation index for the series is just over 86, a lot better than the Eccleston and first Tennant series, and at a par with everything other than the Donna Noble adventures. The consolidated audience ratings are not yet all in, but the average is already well above 7million, consistent with other series, and with the new factor of iPlayer the total reach is averaging a reach of about 8.5 million, which is up. While there seems some disaffection in fan quarters (and isn’t there always?), the public is still with it, and I am looking forward to both the 50th anniversary special and the next series.

Email ThisBlogThis!Share to TwitterShare to FacebookShare to Pinterest
Labels: 2013 Season, Doctor Who, The Name of the Doctor, TV