Judi Dench and Ben Whishaw, two great actors from different generations, verbally spar over the gap between childhood and adulthood in a new play at London’s Noel Coward Theatre.

John Logan’s new play imagines what was said when the real life inspirations for two classic children’s characters met. In truth the rendezvous in the 1930s was fleeting but Logan extrapolates what sort of things they could have discussed given their similar circumstances. Of course you first have to accept that both would be able to articulate their lives so cleverly and there are times when the verbal sparring is just too intellectual to be anything other than something a playwright would create. Yet seeing two great actors at work is something to treasure even if the narrative can sometimes be over indulgent. 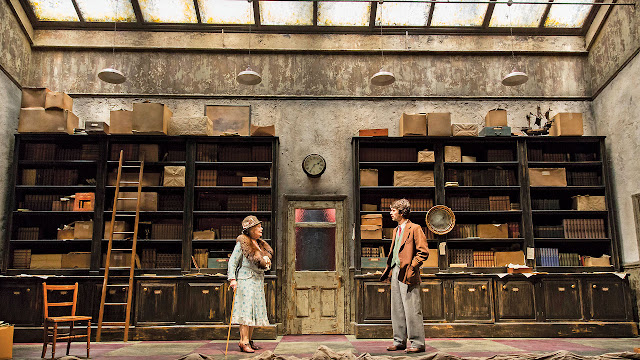 Logan’s issues touch on a modern preoccupation with celebrity; by virtue of the fact that both Alice Liddell Hargreaves and Peter Llewellyn Davies became famous not for who they were but for the fictional character each inspired. The play deals with their differing reactions to the predicament which she seems to have handled altogether better than him. We journey back to their respective childhoods, each in the shadow of creative men whose relationships would nowadays be disapproved of. The drab bookshop where they initially meet soon disappears to reveal a child-like stage with depictions from both Alice in Wonderland and Peter Pan. Lewis Carroll and James Barrie are soon on stage as we re-live episodes from each of the protagonists’ younger days. Finally we are joined by their alter egos in the form of Peter and Alice.

All six soon begin to interact as the stories of two lives are told and it becomes clear neither has had an especially happy outcome. Yet along the way for Alice there have been good times. Judi Dench has tended to become associated with a particular sort of role in recent years and starts this play in similar manner. However once we travel back, it is as if a veil has been lifted and she delights in mimicking the playfulness of a girl. This transformation is so seamless and by far the best part of the play. Alice seems to have developed a pragmatic approach to the bad things life has thrown at her and Judi Dench essays this beautifully making Logan’s sometimes over explanatory dialogue sing.

Peter on the other hand has never recovered from his wartime experiences even if he seemed quite dour before that. Ben Whishaw’s reputation for tearing up roles with energy is not really needed here; he is a low key counterpoint for the most part though there are subtleties in his portrayal as well. You feel any actor might have difficulty breathing life into a character who seems to be in a lifelong sulk!

The staging really does conjure up the feel of both books and another highlight is the way the three sets of characters chop and change; especially when the fictional Alice and Peter begin to snipe at their real life versions. At a shade under 90 minutes with no interval, Peter and Alice would be heavy going with a lesser cast and even with such talent you do struggle at the end to work out exactly what conclusion John Logan would have us make except that life is hard and you can never recapture your youth. Somehow, I think we already know that.

Peter and Alice is on at Noel Coward Theatre, London until 1 June. 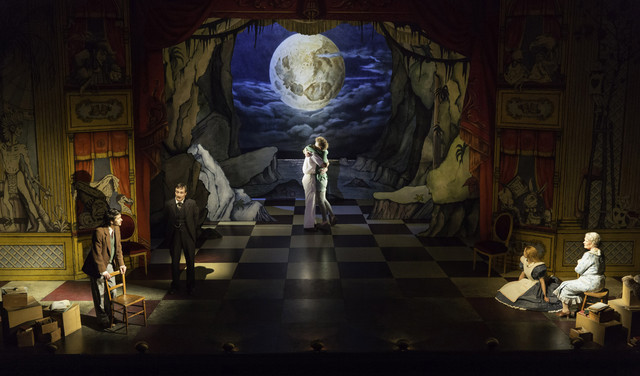