There has been a lot written lately about press freedom, most of it hugely exaggerated stuff suggesting criminals of all kinds will be free to roam if the press are gagged in any way. This view overlooks / ignores the huge number of miscarriages of justice that occur each year and, even worse than that, cases where a person is named and shamed only for it to be later discovered he or she is innocent. Chris Chibnall’s nervy, powder keg of a fifth instalment is clearly riffing on the case from a few years back of a man who lived in the basement of the house where a girl was killed. Because he was unconventional looking the newspapers decided he was guilty. They didn’t actually say that of course, but the pages and tone of the copy suggested nothing else. It would therefore be very easy for this episode’s tale of newsagent Jack Marshall to become a polemic but Chibnall takes care to acknowledge all sides of a complex debate. He seems to realise television and film drama plays a part as well in our perception of people, especially suspects in the sort of shocking case Broadchurch deals with. This balance, maintained throughout but never overwhelming the human drama delivers some of the best television writing seen in a long while.

Jack has a past conviction for under age sex but the circumstances are less clear cut than the conclusions people immediately jump to. The plot therefore demands that the viewer suspend their prejudices for a second. OK you could argue that Chibnall brings this past misdemeanour to the brink of legality to tease us but what he is saying is that this does happen and while no excuse- and even Jack never suggests he was wrongly imprisoned- muddies the certainties that proponents of either side of the debate like to cling to.

Then there is the press response. One of the cornerstones of those who see any restriction of press freedom as censorship is that journalists will be unable to uncover things `in the public interest`. The episode shows the difference though in the sort of public interest that local reporters may have against national priorities. The copy that Karen and Olly file is hardly unbiased but in the hands of her editor it becomes a sensationalist tale of `Broadchurch Jack` a sobriquet that oozes menace. This stokes up the locals, led by Mark Latimer’s increasingly suspicious assistant Nige (my number 1 suspect at the moment) whose angry confrontation with Jack is only broken up after Mark learns the full story. The episode demonstrates that things do not happen in isolation and that how we communicate things to the world has unforeseen implications, something that is more relevant than ever in this age of social media. So many recent case spring to mind while watching. 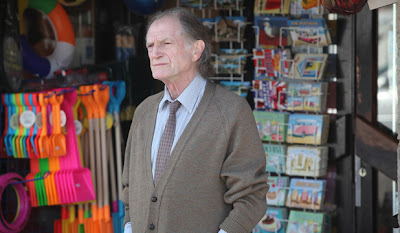 I don’t think I’ve seen a more affecting performance on tv for a long time than David Bradley’s in this episode. Jack’s stillness, his stubbornness and his dignity are conveyed without hysterics but with a hollow eyed fear.  Even before his explanation you do feel sympathy and shock at the way the town turns on him and surprise at his resilience. It also makes his previous reticence to divulge information in previous episodes clear. If the ending seems inevitable consider that we don’t know at this point if he killed himself or was killed by some of those village vigilantes. Perhaps the murderer thinks that if the police believe he committed suicide they will assume his guilt and close the case. It’s a scenario that draws in so many other angles including circumstantial evidence, the weight of the past, the mob mentality of most people and how the truth doesn’t seem to matter as much as the lies.

Most drama would make that the sole story bur Broadchurch is a generous provider of multi strand plots so this week also sees Beth losing it – Jodie Whitaker giving a heart wrenching performance- and trashing the hotel bar. Yet equally as strong was the evening that she and Mark decide to look through Danny’s things putting aside the arguments of recent days. Interspersed with Jack finding yet more newspaper headlines about him, it’s a powerful last five minutes.

Lurking on the sidelines still is scary Susan. Pauline Quirke’s frightening character seems to be making friends with Tom, Ellie Miller’s son. Is this what she did with Danny? Is it her? And Nige’s increasingly hysterical response to events only draws out attention going well beyond suspicious behaviour. He is so outspoken about Jack – and seems to owe Susan a lot of money for something- that you wonder why. Interesting too that Hardy has Rev Coates on his list of suspects; the affable, yet nervous priest is perhaps the antithesis of Jack fitting nobody’s idea of a killer. At work speculation as to the identity of the murderer is a weekly pastime with more candidates than Hardy himself listed this week. It shows how the series has permeated that line between something watched and something involving. The last time I remember such a lot of talk about a drama was the speculation last year as to how Sherlock escaped certain death.  Sherlock turned out to be the best tv drama of 2012; the way things are going Broadchurch is a looking like a strong contender this year.