A Good Day to Die Hard is ridiculous fun!

Crunch! There goes an enormous lorry crashing into some concrete. Kaboom! That’ll be the very old building exploding in a huge conflagration. Splatter! Another round of gunfire takes apart some vintage chandelier. A Good Day to Die Hard is a cartoon that has come to life – enormous fun but totally ridiculous. If any real person went through what John McClaine and his son, er, John McClaine (aka Jack) go through in these packed 97 minutes they would not survive. Yet at the very end, after variously being shot at, stabbed, crashing various vehicles, falling through, over and down various locations, the two sport some cuts and bruises! 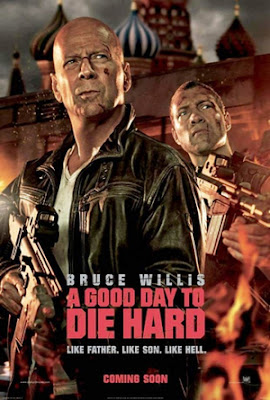 The plot, such as it is, involves the now increasingly grizzled McClaine travelling to Moscow after his estranged son is arrested and put on trial. Turns out Jack works for the CIA and is trying to smuggle whistleblower Yuri Komorov out of the country along with information relating to the Chernobyl nuclear incident. This plays out rather like one of those pre- Craig Bond films with some double crossing and enjoyable villains. Really though it is just a platform on which to present the movies’ tremendous set pieces action sequences.

The first – and best- of these is an extended chase through Moscow’s streets laying waste to dozens of vehicles in a breathless pursuit that lasts about fifteen minutes. It’s hugely accomplished and rammed with excitement- each time you think it’s over, along comes another bit. With a couple of talky asides, matters continue at a breakneck pace with a number of further imaginative scenarios blurring the line between reality and fantasy. The McClaines’ escape down a plastic shoot on the side of scaffolding while a helicopter is firing at them is a particular favourite.

The sheer pace of these escapades and the increasingly unlikely coincidences stringing them together would jar in a film of more serious intent but this bone crunching incredulity is the Die Hard franchise’s calling card and they utilise it so well. Director John Moore establishes a terrific momentum; so much so that when we get to the science bit involving nuclear weapons all you can think is ``I want more crashing trucks!”
.
Matters climax in Chernobyl itself and, true to form, while the villains are all dressed up in protective clothing, the McClaines turn up in casuals. Mind you, the villains do have a machine that- wait for this- diffuses radiation in a few seconds! Just when it looks as if the film might have run out of steam there is something ridiculously brilliant involving a helicopter and a lorry. By this stage things explode so hugely that you wonder why all the uranium nearby doesn’t go off. Of course, it doesn’t!

All Bruce Willis needs is that smirk and some lively if sparse dialogue to inhabit a character with which he is very comfortable. Willis enjoys a good on screen rapport with Jai Courtney who plays Jack as a straight man to McClaine senior’s wry detachment. Sebastian Koch is excellent as Komorov whose initial cowed demeanour alters later when his true intent is revealed.

It is difficult to see why critics have been so harsh with this film because it does what it is supposed to do. Nobody expects intellectual rigour or even a lot of depth- this is meant to be entertaining and larger than life.  For sheer bravado and brisk clamour, A Good Day to Die Hard hits the spot. You may not see a more enjoyable romp all year.
﻿ ﻿