Games of Thrones season one puts the realism back into fantasy.
For those without either Sky Plus or a lot of spare time, TV series flow by without us ever knowing much about them unless people start recommending them.  The more who shout, the more chance that the rest of us will check out what the fuss is about. There is an inevitable buzz about some shows and few currently burn brighter than Game of Thrones. Many who have seen it wax at length about its brilliance while some don’t like it at all. This polarising of opinion usually means there is something worth watching so I recently took in the first season over the space of a week or so. There are only ten episodes, so it is not the sort of investment you need to make when approaching a 22 part series. The question is did the series live up to its reputation? 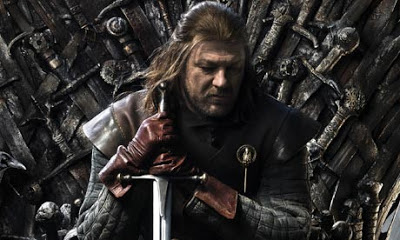 It takes a while to get a handle on Game of Thrones. Based on a novel it has the richness of detail that novelists revel in and despite a visual scope that stretches further than most series, large scale encounters are mostly avoided in favour of character led interaction. Not that the series is afraid of a set piece but it chooses its moments wisely to maximum effect and always to serve its players. While billed as fantasy, it is the absence of that genre’s most extreme traits which define the show. When they come they shock more effectively than they would. So nobody flies around, spits fire or waves their hands to deliver bolts of light. In fact the action is very grounded, defined by bad weather, heavy swords and effort. At times it is as much a medieval drama as a fantasy one-if we see a raven it is not a potent of unearthly deeds, it is delivering a message tied to its leg.
The first season then plays out more like a historical drama, the genre from which it borrows a number of plot lines relating to royal power, warring factions, court treachery, changing allegiances and battle strategy. Where it scores above such dramas is in the large number of intelligent characters out scheming each other. Normally you’d expect a few, but Game of Thrones is packed with duplicity and intrigue even if the mechanisms by which the world works are not fully explained. The throne for example seems up for grabs for the person with the most money or the biggest army. It makes for a riveting drama, imagine I, Claudius where half the cast are as scheming as Livia. Feudal systems seem the basis for each of the kingdoms and it is noticeable that, so far at least, those with designs on power seem to have selfish reasons rather than any notion of being a good ruler.
While it all takes place on two continents- Westeros and Essos- of a fictional world, the television show’s design is informed by English history; indeed only the King’s throne made of dozens of swords looks different to things we’ve seen. Far from being unoriginal this allows us to ease into the drama. The designers and writers have at times exaggerated for great effect emphasising how brutal a world this is. So we see tower top cells with open sides, an enormous defensive Wall, very large swords and probably even more blood than is realistic. 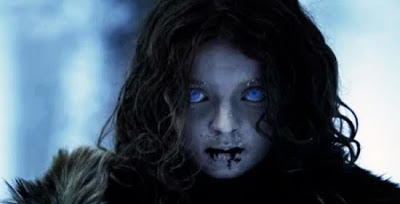