In The Dark Knight Rises, Christopher Nolan has sculpted an intelligent, exciting and very contemporary film.
The classic `superhero` stories owe their origins to comic strip logic and however much filmmakers try to mould them differently something of those origins still tends to peak through. While this has ensured they remain durable franchises that can be re-interpreted again and again it has also undermined their relevance. In today’s very strange world the idea of clear cut hero boldly combating all -bad villain seems simplistic. The Dark Knight trilogy as we are supposed to call it to differentiate it from its colourful or semi comedic predecessors is always at risk of being so straight faced that we find it funny but in this grim but clever finale there is no danger of that. Christopher Nolan has created a classic film, the best of 2012 so far and probably the best in its genre ever. Yep, it is that good.
Some spoilers lurk beyond this point… 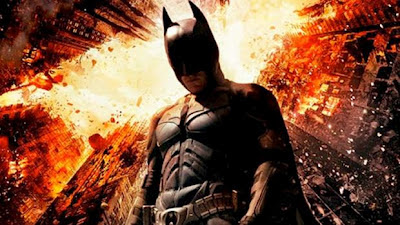 It opens eight years on from the events of the second film. The Batman- as Gotham’s inhabitants call him- is gone, believed to be responsible for the death of the now revered Harvey Dent. Only Commissioner Gordon knows the truth. As for Wayne himself, he is a wounded man - mentally and physically- hobbling about out of public view in his large country house like a latter day Howard Hughes In a fluid series of sequences we see the emergence of a new threat in the form of Bane, played with relish by Tom Hardy despite having half his face covered by a breathing mask.
Bane has soon brought the establishment and the city to its knees, emerging from underground after letting off a series of bombs before urging the underclass to seize their freedom. Whereas most big films separate brain and brawn, Bane is both. Born in prison and with a connection to Wayne that even this review will not spoil, he is a terrific character because he does not mess about like these people normally do in films; the brutal efficiency he wields is like a wave that trammels across established movie conventions.
Bane’s motivation may be carried out with vicious brute force and threats but the philosophy behind it is uncannily political and contemporary. When he emerges to take over he makes a speech in which he tells people to take seize the city back from the corrupt politicians and businessmen who have run it. If you were to look at the text of that speech it is not unlike that made by candidates in election years in the U.S, or the rhetoric of last year’s so called Arab Spring. The talk is all about “the people” addressing “you”.
There are  resonances too of the Occupy movement’s well meaning but muddled messages and we later see the rich and privileged being pulled from their houses.  There is also looting, looking uncannily like the real thing we had here last year as well as trials where the former pillars of society are condemned for their indulgence. Nolan and his brother Christopher seem to be delivering a modern fable, taking us deep into the sort of debates about the recession that many people can identify with. Yes, we see Bane’s brutality but his central argument might be persuasive to some. Perhaps this message is slightly undermined by the fact he has a large bomb by way of leverage but Nolan ensures that chatter along the same revolutionary lines is already spreading around Gotham before Bane’s appearance. This section of the film is remarkable in that while shining a light on such issues it still retains its capacity to thrill.
﻿ ﻿
If anyone doubted the casting of Christian Bale- and some did- he delivers a carefully calibrated performance in this film that, more than ever, separates Bruce Wayne from Batman. When he fights Bane and loses badly ending up in the same prison his nemesis once languished in, you can believe every moment of Wayne’s physical and mental agony. While he’s away the heroic mantle falls upon Blake, a police officer who can identify with Wayne and has realised his secret identity. Blake represents traditional, almost old fashioned heroics, and thanks to a superb performance by Joseph Gordon Levitt gives the film a real blue collar identity, grounding it when all the pyrotechnics kick in.
Likewise Gary Oldman whose Gordon remains untainted by everything he’s seen. Gordon is the heart of the film, an ordinary man dealing with a changing dynamic as best he can and Oldman has never been better. In a man’s sort of film, Ann Hathaway makes a strong impression as burglar Selena Kyle, establishing a rapport with Bale’s brooding Batman and holding her own when it comes to the fighting.
Nolan’s sense of pace and content is nigh on perfect. Like Inception, he never lets up meaning the film’s near three hours of running time whizzes past without any flab. This leanness extends to the plot which, without the curves that made Inception so interesting, is just as detailed but on a more linear plane.
It comes to something when the big, powerfully staged, attack on the city is merely the starting point for the second half. Nolan manages to make what should be the slower section a fascinating series of small victories and disappointments whether on the streets or in the prison. When Bruce finally does makes his escape, with a surge of Hans Zimmer’s weightily impressive orchestral score, it is like an Olympic triumph.
Unlike 99% of big films, however exciting the chases, fights and set pieces become- and believe me they are brilliantly breathtaking – the contemporary issues and personal dilemmas that underpin the film are never forgotten.  Unbelievably the movie ramps up everything- the jeopardy, the action, the emotion, the story – for the run in and still manages to leave a couple of question marks for us to ponder as we leave the cinema. Epic stuff in every sense of the word and a satisfying conclusion to the saga.
Posted by John Connors at 19:13