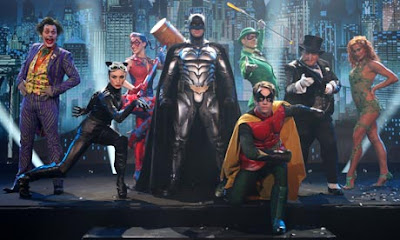 Perhaps surprisingly- though no doubt with younger audience members in mind- the plot places Dick Grayson aka Robin at the forefront. While the opening reproduces the murder of Bruce Wayne's parents, for the rest of the show Batman / Bruce remains a distant character. All the fun is had by the villains of course including a suitably manic Joker and an innovatively realised Scarecrow. Their plans may be repetitive but are simply devices to ensure we get from one set piece to another.

The visual aspect is superb dominated by an enormous bat wing shaped LED screen on which specially drawn comic book pages turn us through the action, altering perspective and depth to complement the acrobatics on stage. This proves an excellent story telling short cut as well as adding scale inside the vast venues. There are still plenty of props, the most impressive of which are a giant Joker head hiding some of his henchmen and a sleek looking Batmobile.

There is an element of Cirque de Soleil about the stylised action, particularly the fighting, though in the case of Batman he seems hindered by his bulky suit. Mostly though, the choreography works well especially a sequence where the villains and their lackeys stomp out towards our heroes, backlit by searchlights. The use of colour and lighting is much better than the comparable Doctor Who Live show last year which sometimes seemed lost in the cavernous venues- here the show reaches out to every seat.
Considering the medium the script is robust enough to tell a story but never gets bogged down keeping a momentum while the lively orchestral score adds a layer of filmic sheen over the whole thing. For all but the why- so -serious Batfan, Batman Live is an excellently staged, fun, involving show for all ages. And in case you were wondering- no, there isn't any singing!