Reviewed by Chris Arnsby. Dixie Peach: “We've got a fabulous show. We've got people on like Trans X, Feargal Sharkey, and Madonna. But we're gonna kick off right now with something to get you into that holiday mood. Here is Arrow with Long Time.”
[36] Arrow: Long Time. The start of tonight's episode of Top of the Pops has been slashed by the BBC4 Psycho-style editor. There are a couple of clues; Gary Davies is rendered oddly mute throughout Dixie Peach's introduction (although I'm fine with an overall reduction in the Davies word count); Dixie Peach's speech fades in abruptly after the audience cheer; and here's the real smoking gun, the font's all wrong on the hosts caption. It's not properly bolded and the drop-shadow isn't strong enough. It's obviously Bring Your Child to Work Day in the BBC4 Caption Faking Department. 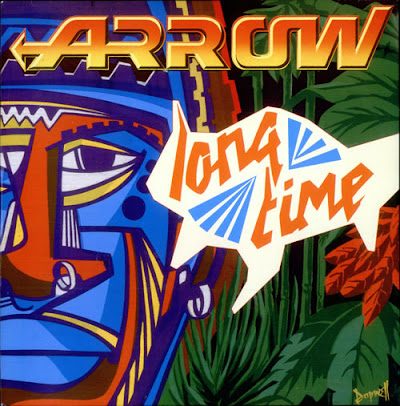 Gary Davies snipped opening line was, “Hey, how are you doing? Welcome to Top of the Pops. We've got a knockout show lined up for you. And here is the only man who at Radio One has got a better suntan than me.” Dixie Peach then continues, “thanks Gary, and as Gary said [end edit] we've got a fabulous show...” Oh Mater! May one dance round the maypole of ethics-of-editing-content-of-its-time again? Yes, do let's! Dixie Peach hosted his first show on 13/06/1985 and virtually his first words were, “I've been laying in the sun in anticipation for this big event.” This was deemed suitable for BBC4 viewers because it's a comment made by Dixie Peach (even if it's possibly not one he'd make today) rather than one directed at him. Under the circumstances it seems perfectly reasonable to leave Dixie Peach's joke intact and cut Gary Davies' near identical version.

My view used to be that edits like this are fine for the early evening repeat but the late night showing should be left uncut and contextualised by the continuity announcer. I suspect the BBC's would counter by pointing out this system results in two slightly different copies of the same programme existing, and sooner or later someone will make a mistake and show the wrong one at the wrong time. You stop that mistake from happening by only having one copy, the edited one. Evidentially I've become more risk averse in my old age. I find myself leaning towards the BBC4 position. These repeats, to quote Popeye, are what they are. They are presented with a very cautious eye on modern sensibilities. You either accept that or you hunt around on the internet because most of the edited material is lurking out there. This https://drykid.github.io/ is a good place to start.

And Long Time? What of Long Time? It's a nice bouncy little song. There's an unfortunately timed edit when the camera dashes towards Arrow (the name of the singer, not the band) on the appropriate line “keep the momentum.” Arrow looks right down the lens and it's clear that he's going to point at the home audience, but first he wants to get the next line of the song out. The problem is Top of the Pops relies on fast cuts to keep the pace. By the time Arrow is ready to make his move Vision Mixer Heather Gilder is ready to move on to the next shot, and Arrow's big rock-star-pointing-down-the-camera moment is lost. Also, I feel sorry for the poor bloke lumbered with the saxophone. The damn thing is almost as tall as he is, and it looks like it weights a tonne.
[36] Madonna: Into The Groove . On video. 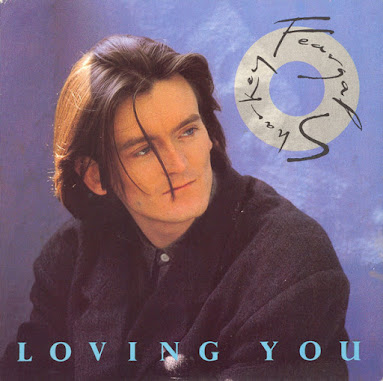 [30] Feargal Sharkey: Loving You . One of those songs that seems to take forever to get going. The audience shuffle uncertainly during the first minute and someone in the front row starts talking to her friend. She's distracted and visibly jumps when the first crescendo kicks in, which may have been the effect Feargal Sharkey wanted. It's telling that an internet search for the lyrics for Loving You reveal lots of results for You Little Thief and A Good Heart, but none for the song in question.
Top 40 Breakers : [35] The Cure, In Between Days; [23] The Pointer Sisters, Dare Me; [15] Dire Straits, Money For Nothing.
[10] Trans X: Living On Video . Not on video, in the Top of the Pops studio and on a stage decorated with what can only be called vague science. There's a control panel at the back of the stage which looks like a refugee from the old Swap Shop set. There are also assorted conical flasks, retorts, and bits of distillation kit bubbling with dry ice. Wouldn't it make more sense to decorate the set with old Ampex video machines, or is that too literal?Trans X get bonus points for rhyming Hyperspace with Computer Interface.[9] Jaki Graham, Round & Around; [8 ] Denise LaSalle, My Toot Toot; [7] Opus, Live Is Life; [6] Madonna, Crazy For You; [5] Kool & The Gang, Cherish; [4] Madonna, Into The Groove; [3] Harold Faltermeyer, Axel F; [ 2] Sister Sledge, Frankie.
[1] Eurythmics: There Must Be An Angel (Playing With My Heart). A repeat of the there-must-be-a-spotlight-(shining-on-Dave-Stewart's-head) performance from the 11/07/1985 edition.
[7] Opus, Live Is Life . Credits, and the audience dancing to “the summer record of 1985.” Really? I remember summer 1985 as sunny and fun. We went on holiday to Cornwall. It must have been considerably bleaker than I recall if the record of the season was this plodding dirge. Even the notoriously arrhythmic Top of the Pops audience can clap along to this one.
Performance of the week: Arrow, Long Time.
Posted by John Connors at 22:48