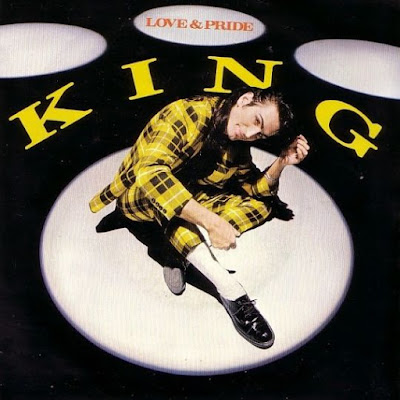 [11] Bryan Adams: Run To You. On video. Gary Davies introduces Bryan Adams and allows us to admire his knitted Radio 1 Medallion Man jumper. I've finally realised why I find Gary Davies' presenting style a bit unnerving -he doesn't blink during his links which makes him look glassy-eyed.
[12] Phil Collins: Sussudio. The song that made millions of people ask, what is a sussudio?
Phil Collins has brought his backing band into the studio. The hilariously named Hot Tub Club. There seems to be about 26 of them. Their big advantage is that they allow lots of shots that don't feature Phil Collins. The cover of the single is a big close-up of Phil Collins' head, as if he's auditioning for the Holly role in Red Dwarf.
[13] Kirsty MacColl: A New England. On video, in the snow.
Top 40 Breakers: [32] Killing Joke, Love Like Blood; [34] Chicago, You’re The Inspiration; [39] George Benson, 20/20; Dead Or Alive, You Spin Me Round (Like A Record).
[18] Howard Jones: Things Can Only Get Better. Gary Davies' introduction is upstaged by a wally who leans in from stage right but seeing nothing of interest leans out again. Howard Jones, like Phil Collins, has decided there's safety in numbers. He has also brought along his 26 piece backing band; but they are a different huge group of people to Phil Collins' huge group of people. Great chunks of recording time must have been eaten up just ushering everyone in and out of the studio. This is a different Things Can Only Get Better to the one you're thinking of.
[16] Billy Ocean: Lover Boy. On video. "Complete with some fun monsters," is how it's described by Richard Skinner but that doesn't get anywhere close to describing the baffling spectacle. 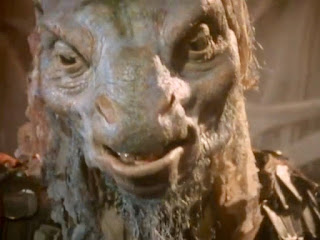 A lizard-faced alien rides a horse down a beach. It enters a cave, inside which is a bar filled with assorted teledroids, mutotrons, astronoids, and space-sailors.  The lizard-faced alien gazes lasciviously at a purple-haired female who looks like she's wandered in from the set of The Dark Crystal. Lizard-face laser bolts Dark Crystal lady's date and drags her off. Meanwhile Billy Ocean is trapped in a video effect, forced to sing and dance for the amusement of the bar's patrons.
The relationship of the song to the video: zero. Naturally.

[10] The Art Of Noise: Close (To The Edit). "The top ten best selling singles and here they are on video." Well except for one, Gary.
[9] Strawberry Switchblade: Since Yesterday. Richard Skinner does a lot of yakking over the top of the Strawberry Switchblade clip which slightly defeats the purpose of using clips to feature more songs.
[8] Tears For Fears: Shout. Slipping down the chart.
[7] Russ Abbot: Atmosphere. Incorrectly captioned as Russ Abbott. I've only just noticed this is shot on film and not video. I wonder if the "video" was made by the production team  for Russ Abbot's Madhouse. The use of film for the promo would make sense if it was made by a TV production crew who always associated going on location with film rather than video.
[6] Bruce Springsteen: Dancing In The Dark. "America's answer to Russ Abbot," according to Richard Skinner, who has clearly been taking lessons from John Peel.
[5] Prince: 1999. The theme song for Space:1999.
[4] Ashford & Simpson: Solid. "Plus Paul Rutherford from Frankie Goes To Hollywood." Apparently.
[3] Foreigner. I Want To Know What Love Is. Finally slipping down from number 1.
[2] King: Love & Pride. Again.
[1] Elaine Paige & Barbara Dickson: I Know Him So Well. One of those performances where the camera angles seem carefully chosen to avoid showing the audience. It always makes me imagine the crowd are getting restive and flicking V's at the performers. The few crowd shots show actually show everyone is dutifully swaying along, and Elaine Paige & Barbara Dickson get a proper round of applause at the end.

[23] Pat Benetar: We Belong. The show closes with a quick interview with New York DJ Gary Byrd who has been standing in for Steve Wright. He was a regular presenter on Radio 1 between 1984 and 1986 and normally hosted shows recorded in New York, including Gary Byrd's Sweet Inspirations and The American Chart Show. Presumably Steve Wright was on holiday, and Radio 1 decided to fly Gary Byrd over to take over the afternoon show for a couple of weeks.
Performance of the week: King: Love And Pride