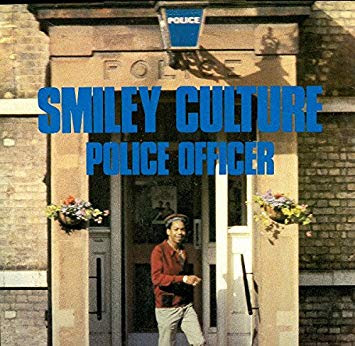 [37] Sal Solo: Sam Damiano (Heart & Soul). "We're going to the charts a bit early but there's a good reason for it," says John Peel. After the charts there's still no news about the imminent merger of Top of the Pops with Songs of Praise. Instead Richard Skinner introduces Sal Solo, "who used to be in Classix Nouveaux". Oh wow! The first single from a bloke I've never heard of, who used to be in a band I've never heard of.
[10] Foreigner: I Want To Know What Love Is. Here comes the great news for all viewers. Let's see how Top of the Pops does its equivalent of merging Misty with Tammy.
John Peel: "As we hinted at the beginning of the programme there are one or two changes in format on this week's Top of the Pops. Richard is now going to explain all."
Richard Skinner: "Well it looks like this you see. We went out to find out what you wanted from Top of the Pops and the overwhelming request was more top hits. So from this week we count down the Top Ten starting with Foreigner at number 10".
Oh no, Michael Hurll has reinvented the 1982 Top 10 video countdown. A segment so popular it ran once (18/2/1982) before vanishing. The format reappeared a year later as 1983's Top 10 Video Show, and was twice as popular; i.e. it ran twice.
Now it's back again. What fool removed the stake from it's heart this time?
I don't think the format works for Top of the Pops. There's already a weekly show that counts down the best-selling singles in numerical order. It's the Top 40 on Radio One, presented in 1985 by Richard Skinner. Frankly I'm sceptical that people really were demanding a change to the programme that allows them to hear 30 seconds of I Want To Know What Love Is. (John- Surely better than three minutes of it!)
[9] Paul Young: Everything Must Change. On video.
[8] Tears For Fears: Shout. A song with a simple and powerful beat. Naturally the Top of the Pops audience clap along. Naturally it takes them about 20 seconds to lose the rhythm.
[7] Frankie Goes To Hollywood: The Power of Love. In 1985 we're not going to see much of the band of 1984. Welcome to the Pleasuredome is released in March, but its only studio performance takes place on a Mike Smith hosted edition which will be skipped by BBC4.
Meanwhile in Liverpool, appropriately, the Frankie Goes to Hollywood computer game was being developed. Crash magazine previewed the game with possibly one of the oddest pieces of cover artwork ever, tied into the video for The Power of Love where the band appear as cherubs round a gilded picture frame. 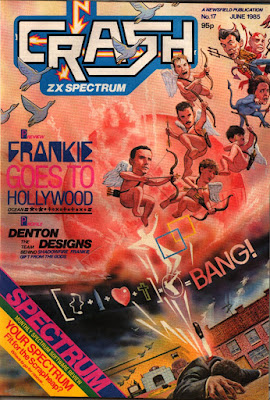 [6] Ray Parker Jr: Ghostbusters. On video.
[5] The Toy Dolls: Nellie The Elephant. A second studio appearance for The Toy Dolls, but their first on BBC4 after the 13/12/1984 edition was dropped because it featured G-ry Gl-tt-r.
[4] Madonna: Like A Virgin. On video.
[3] Paul McCartney & The Frog Chorus: We All Stand Together. On expensive film. Yes, you should look impressed by the wealth of that nice Mr McCartney.
[2] Wham!: Everything She Wants. It's the first Wham! appearance of 1985. To mark the occasion Andrew Ridgeley has been allowed to dress himself. He's looking spiffing in a knee-length jacket with padded shoulders and a pattern lifted from a dressing gown, and matching trousers. No not spiffing. What is the word? Oh yes, stupid.
[1] Band Aid: Do They Know It’s Christmas? On video.
[30] Grandmaster Melle Mel & The Furious Five: Step Off. "I hope you enjoyed the new format," says John Peel signing off. No. I didn't. "Write and tell us all about it." Rest assured I will as soon as I can work out how to Tweet back in time 35 years.
Performance of the week: Smiley Culture: Police Officer.
Posted by John Connors at 22:51