From his early days sarcastically undercutting pretentious pop stars Simon Amstell has trod a fine line between being an outsider and becoming exactly the sort of person he’s cynical about. And he’s aware of it as well. Benjamin marks both his big screen writing and directing debut and is set in a world he clearly knows well enough to poke fun at. It concerns a filmmaker concerned about his new project as it nears release but unlike his character, Amstell has made a well rounded, small scale movie that even those outside the milieu in which its set will appreciate. Benjamin is a late twenty something film maker seven years on from his well received debut struggling with the follow up, `No Self`. He insists on peppering the two hander narrative- largely based on his previous relationship- with inserts of a Tibetan monk espousing views on consciousness and who we are, a decision that means the results are met with mixed responses. In an amusing cameo we even see Mark Kermode laying into the `monk` sequences and expressing his disappointment. Anna Chancellor’s producer Tessa has already strongly suggested leaving this part out; its interesting that once its released she seems to lose interest in both the result and in him.
"The film is about somebody looking for love from an audience because he's terrified of intimacy”, Amstell recently said. In his personal life we learn that Benjamin seems to pick younger partners - “weak and well lit” as one character puts it. When he sees French singer Noah performing at the launch of “a chair” (yes even chairs have launch parties apparently!) that he is mitten is no surprise to his agent Billie or seemingly his only friend comedian Stephen. Throughout the film the subsequent relationship between Benjamin and Noah ebbs and flows because of the former’s refusal to commit. 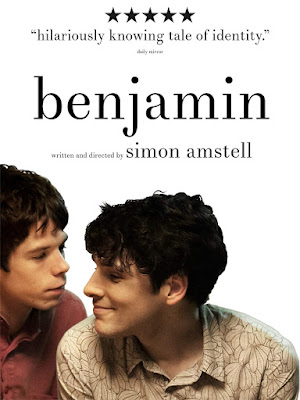 While the storyline is slight, the film is packed with snippets of the self absorbed world of the London based independent arts world. For all his reticence Benjamin actually fits into this world better than he imagines; his film’s quasi philosophical mutterings are no less  pretentious than the performance we see of a woman’s attempt to display being in a womb by means of contemporary movement. His reaction to this display- wittering on about the amount of paper she is using- shows how little he sees the parallel. In this sense Noah represents a different world; his songs are straight forward, at times they seem to be addressing Benjamin directly. Ultimately it is this clarity that attracts and also scares Benjamin.
The writer is renowned for a sardonic sort of comedy and you can sometimes hear his voice in Benjamin’s speech despite Colin Morgan’s Irish accent. Morgan captures the character so well though; crucially for the viewer he remains likeable even though he shouldn’t be. His response to the relationship can sometimes be baffling because he doesn’t seem to know himself why he is behaving that way. Early on he says “I don’t really know anybody” and given the circles he moves in you wonder if that’s by choice or true of all of them.  Played by Phenix Brossard, Noah is sketched more thinly perhaps in a deliberate way to show how superficially Benjamin sees him and treats their relationship. The two have great chemistry, though for the younger of the two Noah is occasionally just a little too cool. The narrative never really shows us how he feels though again this may be deliberate.
The movie is packed with excellent characters each of whom could sustain their own film; in fact there could be a tv series with this lot.  Billie is played as a kooky whirlwind by Jessica Raine constantly interrupted by phone calls – “I’m in the cab now”- she is the epitome of the busy agent who knows everyone. Actor Harry is played with a straight face by Jack Rowan despite being a perfect realisation of the pretentious young artist who at one point declares “I paint feelings”.  One of the funniest bits is his suggestion of how a putative co-penned film with Benjamin might start.
An against type turn from Joel Fry as Stephen the barely holding it together comedian who finds no comedy in his life. There’s an excruciating scene where his stand up routine turns sour which you can barely watch. There is a great cameo too from Nathan Stewart Jarret who pops up near the end as Benjmain’s bitter ex who has a few home truths. Turns out he’s the most brutally honest person Benjamin knows. 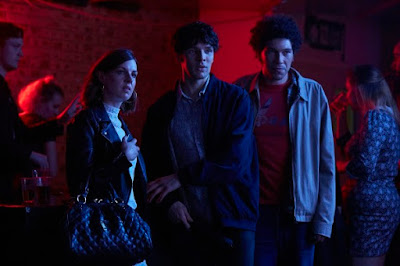 This is Simon Amstell’s directorial debut though a stand up comedian knows a lot about pacing and placing so it presents as an American style indie but the camera is never obtrusive and the sparse music shades rather than pulls you one way or another. His dialogue as you’d expect is razor sharp, lively and frequently amusing. As he did in the excellent Grandma’s House, Amstell deftly draws a number of differing character types each of them authentic and absorbing.  The 82 minutes running time shows a better sense of pace than Benjamin’s film seems to though there is room for a little more perhaps. In fact as it ends my abiding feeling was `so what happens next?`. Always a sure way of knowing you’ve seem a great film.
Posted by John Connors at 22:33