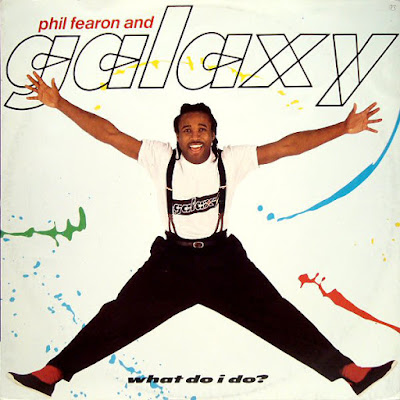 [27] Phil Fearon & Galaxy: What Do I Do? Top of the Pops has gradually cranked up the number of live editions; three in 1981; 10 in 1982; 11 in 1983. This edition is the fifth live show of 1984 and in total there will be 23 across the year. Expanding the number of live programmes also means expanding the number of hosts who can be trusted not to disgrace themselves on prime time BBC1. John Peel, David Jensen, and Simon Bates have been the preferred live hosts, but now Mike Read, Mike Smith, Janice Long, Richard Skinner, and probably a few more, are added to the roster. Steve Wright has noticeably not been asked to front a live edition. Michael Hurll really doesn't seem to like him.
It's carnival night in the Top of the Pops emergency strike studio. That means free maracas for everyone, flouncy dresses for some of the female cheerleaders, and, erm, what appear to be UFO style string vests for some of the men. Footage from the Rio carnival is projected onto the big screen behind the band and at one point the caption "UNIAO DA ILHA" flashes along the bottom of the footage. Perhaps the footage is taken from Carnival in Rio with Anne Nightingale and Ivan Lessa [20/01/1983]. Alas my schoolboy Portuguese is inadequate to the task of translating the various websites that come up after a Google search of this enigmatic phrase.  (Portugese John- Apparently it means `Union of the Island`.)  A previously rehearsed spontaneous conga line forms at the end of the song. The spirit of Flick Colby still hovers over the Top of the Pops studio.


[2] Kool & The Gang: Joanna. Another chance to see the video recorded at Joanna's diner where nobody can place an order because The Gang, and Kool, take up all the seats. The service is terrible. Whenever someone places an order Joanna gazes off all dewy-eyed into the middle distance and remembers when she danced at The Cotton Club. I'm not tipping. These fried eggs are rubbery.
[36] The Weather Girls: It's Raining Men. Thunderbolts and lightning in a BBC studio. It's either a cunning special effect by vision mixers Angela Wilson and Shirley Coward (yes, two vision mixers are credited this week, for some reason) or static discharging from the string vests adorning two of the male dancers; keep an eye on them for some particularly vain posing. 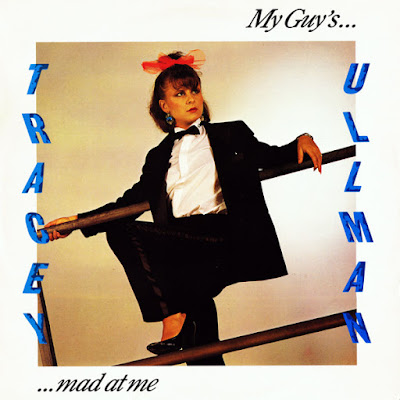 [32] Tracey Ullman: My Guy. "It's twenty to eight," says Richard Skinner glancing at his watch. Don't let Simon Bates catch you stealing his gimmick. He'll be livid. Why not hold up a portable TV tuned to BBC1 if you have to prove the show is live? Or show a copy of  today's Times and make a satirical reference to Caspar Weinberger. Meanwhile, here's the video for Tracey Ullman's gender swapped cover of Madness' My Girl. Complete with Neil Kinnock cameo, for reasons which never become clear.
[37] Sade: Your Love Is King. Sade makes her entrance with the BBC smoke machine set to smooth. It's an arresting performance but blimey those lyrics. "I'm coming/I'm dancing inside." Filth. Did Frankie Goes To Hollywood die in vain?
[38] Bananarama:  Robert De Niro’s Waiting. There's a limp piece of banter before the charts when Richard Skinner gives Gary Davies "a brand new medallion." I'd forgotten the 1980s medallion man trope. David Copperfield* played a character of the same name on Three Of A Kind, and there was also Kirk St. Moritz on Dear John in 1987. Gary Davies' embrace of the image seems odd given that the medallion men were always portrayed as losers.
The person who compiles the chart is having an off day. Sade becomes Slade (which requires an on-air correction from Richard Skinner) and by number 11 the anonymous chart minion has come out on strike in sympathy with the Scene Shifters and written Various, rather than type out in full (brace yourselves) "Bolero/Barnum on Ice the music used by Torvill and Dean by the Richard Hartley/Michael Reed Orchestra."
[12] Howard Jones: Hide and Seek. Gary Davies is keen to stress the live nature of Top of the Pops with Howard Jones "not just appearing live, but playing live, and singing live." And being alive Gary. And the electrics in his keyboard are live as well. Don't forget that. Howard Jones is upstaged by the dry ice machine which is set to pipe-smoker's fug. The song is a bit dull and the audience quickly get bored and start to fidget. They're considerably more excited to spot themselves on the studio monitors.
[1] Nena: 99 Red Balloons. Another repeat of the performance from the 16/02/1984 edition of Top of the Pops.
[31] Mel Brooks: Hitler Rap. On video. Finally some context for the "Mel Brooks is totally obsessed with Nazis" jokes from the 1985 Spitting Image book which I didn't understand at the time. Personally I'd rather have the theme from Fraggle Rock, down at 33, but it's fun to imagine the baffled reaction of David Attenborough fans tuning in early for The Living Planet.

Performance of the week: The Weather Girls: It's Raining Men