Review round up- Dirk Gently, Love Simon, Beyond Bowie

Dirk Gently’s Holistic Detective Agency’s first series is something I reckon Douglas Adams would approve of. Though not a direct adaptation of the books the show successfully employs the sort of high vaulting concepts Adams relished. Souls being transferred between animals and humans, a time travelling device being built by a Victorian inventor, a mystery inhabited by a mixture of eccentric characters. Plus, even though the show was shot in the US, Dirk Gently is played by an English actor which of course he should be. There are times- especially later on- when Samuel Barnett’s fast talking as he races around a control room could be an alternative Doctor Who but the TV series was always an influence on Adams and appears to be on Max Landis’s script too.

It starts straightforwardly- and gruesomely - enough by way of a multiple murder in a plush hotel whose aftermath is witness by bellhop Todd Brotzman. The narrative gradually eases us into the more fantastical elements while simultaneously retaining a hard edged approach.  Like a perfectly constructed puzzle little things will be significant later on. It comes across like a pacier Twin Peaks at first though once the fussy Gently introduces himself to Todd - by climbing though his apartment window- matters start to take an eerier turn. It is true that much of the explanation for what is going on comes via Gently’s spurts of verbosity and it is not always clear how he knows what he knows. His holistic approach allows the script considerable narrative leeway which some may find unsatisfactory.
As a production though it is note perfect with an array of dazzling performances including Jade Eshete as security officer Farah Black, Hannah Marks as Todd’s sister Amanda and Fiona Dourif as holistic assassin Bart.  Elijah Wood has history with odd shows having starred in Wilfrid so brings his wide eyed `what the hell is going on` look into play. The rapport between Todd and Gently is fantastic and better still the script develops each of them as matters unfold so you root for them as mismatched investigators on a grand scale.  If Samuel Barnett’s Gently is initially presented as somewhat hysterical, he evolves across the eight episode to become more likeable.
With lots of ideas and pacey time twisting plot there’s always something going on as well as several developments that surprise you. There’s also some brilliant imagery including a shark that leaps out of a cat and a steampunk inspired space suit.
Love, Simon brings the gay coming of age story into the mainstream. While it may appear to re-tread other films the difference is that this is a major studio production. Rather cleverly it uses the tropes of the traditional high school movie to tell a gay story. Winningly played by Nick Robinson, Simon Spier is your average high schooler except that he carries the secret of his sexuality well hidden. However when he responds to an anonymous post on a public forum from someone else in the school it begins a correspondence in which he starts to reveal more while speculating as to who this other person may be. Then when these exchanges are threatened with being revealed to all Simon finds himself blackmailed into deceiving and manipulating his friends. 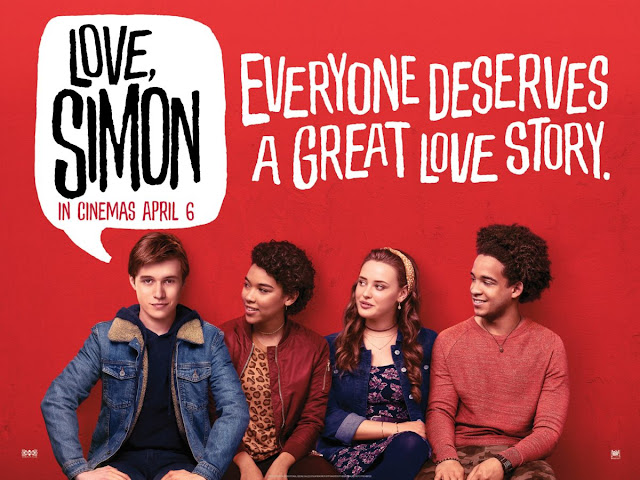 The scenario is played for the most part with a John Hughes- like levity by a likeable ensemble and plenty of well- placed gags notably some fantasy sequences including one where several straight teens `come out` to their parents and another featuring an absurdly colourful dance routine. It also does a good job in keeping the identity of the other person unknown until the very last minute.
This is not an edgy, earthy film like God’s Own Country nor does it aspire to the same poetic level as Call Me By Your Name. Also Simon seems to be surrounded by an astonishingly understanding family and school meaning that when his secret is inevitably revealed the handful who rag him for it are presented as a minority. Would this necessarily be true even today? This liberal approach does tend to sugar coat the situation though Robinson is on hand to give his all in showing how shocked and frustrating the whole thing is for Simon whose avowed wish is just to keep things as they have always been yet knows he can’t. The actor makes the movie work and he’s well supported especially by Alexandra Shipp as Abby and Katherine Langford as Leah. I suppose you could call Love, Simon the gay movie for people who don’t like gay movies but it makes it points well and is not without an emotional pull however lightly its characters seem to deal with what’s thrown at them. And the best scene between Simon and his mum near the end is beautifully written.
Mick Ronson was a talented guitarist and producer yet seems destined to be mostly remembered solely for his stint with David Bowie during the latter’s major breakthrough period with the Spiders from Mars. Beside Bowie, a film by Jon Brewer suggests it might rebalance that a little and indeed many of its interviewees reference it. However as the title suggests Ronson’s relatively short but influential time with Bowie is the cornerstone of the documentary with the rest of his career glossed over in the final 20 minutes. Which is a shame when you think of his work on Lou Reed’s `Transformer`, the Rich Kids album, John Mellancamp and latterly Morrissey’s `Your Arsenal`. Also given short shrift are his collaborations with Ian Hunter both inside and beyond Mott the Hoople. Even Ronson’s solo albums are left un-analysed apart from a few comments. 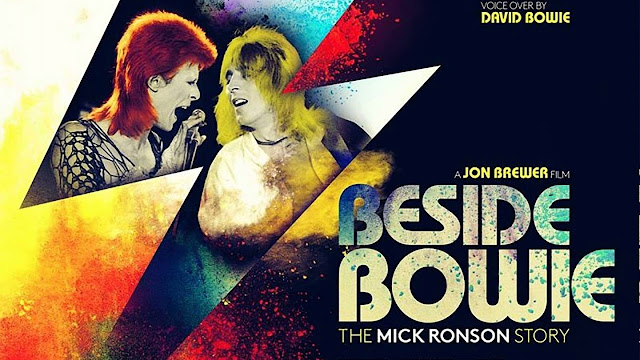 None of this appears to hold much interest for Brewer even though he pushes the idea that the guitarist had far more influence on the sound of the Spiders than he was ever credited for. He certainly takes a more forensic approach to the Bowie era and lines up an impressive selection of talking heads including Mike Garson, Tony Visconti and Angie Bowie. David himself also appears in a voiceover whose origins are never explained. Are these old interview recordings? Were they done specially for this documentary? His voice sounds weak and he’s clearly reading from a script so perhaps they were. Yet even this material never really gets to the core of Mick Ronson the musician and it’s easy to see why when you see him interviewed. He’d probably have laughed if you’d asked him about his craft. He talks about the creation of classic riffs and songs like he’s talking about buying a loaf of bread! Self effacing and seemingly happy to go along with Bowie’s outre costumes he appears to be someone who was content to play sidekick. Indeed, the film mentions that his solo albums were more or less heaped on him by management eager to find the next Bowie which he wasn’t. While he could have covered Ronson’s post Bowie career in more detail its probably wrong to criticise Brewer for a film that appears to skim the surface of a subject who was exactly as he seemed to be; a good bloke and a talented musician. And in context that seemed to work as a perfect counterpoint to the strange, enigmatic Bowie.