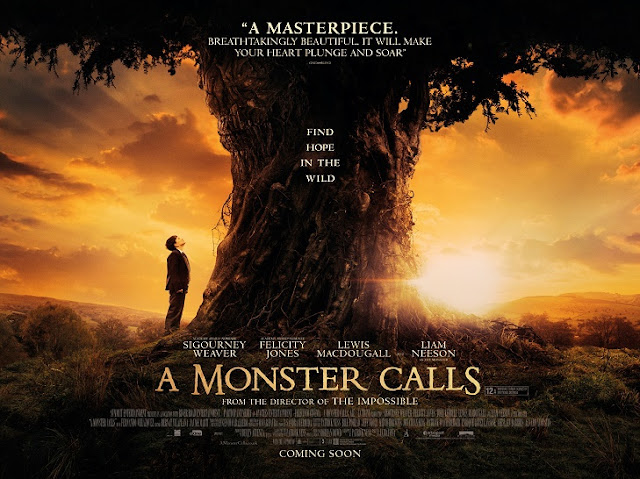 Initially he seems to be coping well but we soon see a violent streak culminating in the trash of his grandmother’s much prized sitting room. He is also imagining meetings with an animated tree. The fearsome looking `monster` of the title is in fact a storyteller who delivers three tales to Conor each of which the boy does not believe relate to him. As his mother’s condition worsens he gets closer to having to tell the tree a truth of his own.


On screen what is a literary idea may seem awkward because we know that the tree isn’t really walking and talking so does what Conor is learning amount to self analysis? In the pivotal scene when he tells his story it draws an uncomfortable truth out that I’m not entirely convinced anyone so young would acknowledge or certainly understand. Nonetheless it is very sharp of Ness to home in on something that anyone who cares for a family member will recognise and perhaps feel guilty about. I’m not sure if this is taken from Ness’ own experience but it is written and played so well that it will certainly feel like truth hammering at the door of anyone in such a situation. 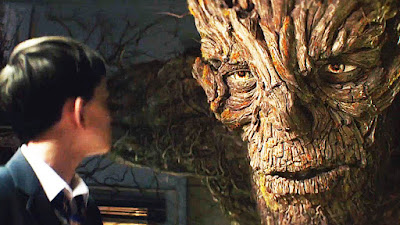 It’s interesting that Ness chooses an imagined tree rather than, say, a child psychologist to bring out these admissions. Certainly it might appeal to older children and as the tree is rendered powerfully (and given Liam Neeson’s sturdy voice) it provide a visual dimension that would obviously be missing from a clinical consultation room. The tree seems to represent the sheer size of the situation in the boy’s eyes, the seemingly disconnected stories are like parables connected to Conor’s life though not always how you’d think.. Whether Ness would say the story telling tree is a metaphor for God is unclear though some people might interpret it that way. Incidentally each of the stories is illustrated with some very interesting graphics.


In the main role Lewis McDougall proves to be a very capable young actor who conveys so much through the spot on dialogue while Sigourney Weaver refuses to allow her stern grandmother character to become some Disney harridan instead layering her performance to show she is hurting too. Felicity Jones’s Lizzie is sunnily optimistic yet as the film progresses you can see her realisation dawning that this is a one way journey. 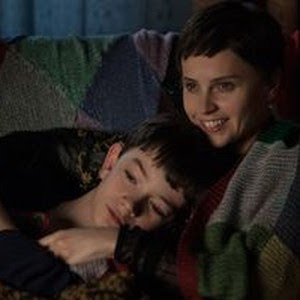 Like the also excellent Me and Earl and the Dying Girl, this is a film that explores the more interesting area of relatives or friends reactions to someone who is ill rather than that person themselves. I would say that Patrick Ness in this clever, emotional story has come closer than most to articulating it .
Posted by John Connors at 23:39