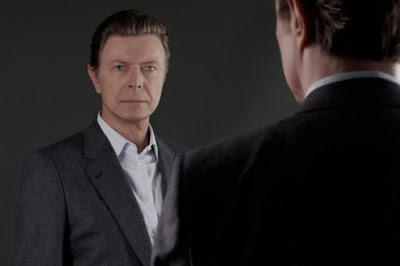 Starting with the 2003-4 `Reality` tour- Bowie’s longest and also his last outing- the ensuing years of privacy are appropriately leapt over to arrive at 2010 when work began in secret on `The Next Day` album. This emphasises that the documentary is primarily about the music more than anything else. 90 minutes is probably not long enough to do justice to the man’s final creativity and even though this is fairly exhaustive it does miss the odd thing notably the utter surprise we all had with the release of the `Where Are We Now` single without any fanfare though there is some interesting footage from the video shoot. Also `Blackstar` is given far less time than its predecessor despite being artistically a bolder statement that was looking ahead as much as back.
With no studio footage to hand, Whatley has assembled the musicians from the respective albums to play and chat about particular tracks. What comes across is the affection and respect they all have for Bowie and how compartiviely relaxed the sessions were. Some may find the musical detail a little too detailed but anyone who thinks Bowie made his career by wafting into the studio and sprinkling alien stardust over his band is mistaken! Hard work and evolving ideas are what it was about and his isolated vocal for the song `Lazarus` underlines that particularly.
There are plenty of nuggets including backstage footage from the `Reality` tour showing how much humour emanated from Bowie plus a fun interview with Maria Schnieder on her collaborations with the singer. More than anything the film seems to make sense of things that puzzled us at the time, such as why he did no interviews which is explained in such simple terms you think `Oh yeah, that makes perfect sense`.
Musically The Last Five Years does share with almost all documentaries the habit of cutting and pasting images and music but not sticking with any of it for too long though this works rather well in this case again underpinning the idea that Bowie was less of a chameleon and more of a collaborator than we imagined. Sometimes an image from one era plays with music from another further giving a sense of a whole. Of course it’s only other people’s interpretations and there’s a clip of Bowie himself in an interview admitting lying was part of his job!
While `The Next Day` and `Blackstar` received near universal acclaim, the musical Lazarus had more mixed reactions and the clips here suggest a work that perhaps might have been re-considered had Bowie’s personal situation not been so grave. It has more than a hint of the sort of project he embraced then would distance himself from years later like the Glass Spider tour or even Tin Machine. While the musician’s accounts of working on the albums are intriguing additions to our appreciation of them, listening to the key characters talking about Lazarus makes it sound just as odd as the unmade `Diamond Dogs` film glimpsed here in Bowie’s conceptual sketches. On the other hand several people attest to the fact that latter day Bowie was only interested in pleasing himself rather than chasing the fame he came to dislike. The Last Five Years is an intriguing, surprisingly informative (the draft cover ideas for `The Next Day` are great to see) and not especially maudlin account of an artist back at the top of his game and being as surprising as ever.