The comic book superhero film that pokes fun at comic book superhero films!
One day Deadpool may bite Marvel where it hurts because in their latest zippy comic adaptation they pretty much manage to take the rise out of all the things they do in their other comic adaptations! It makes the preceding trailers- on this occasion for forthcoming X Men and Superman vs Batman films seem a little dry and sombre. No chance of that happening with Deadpool which opens in the same irreverent fashion in which it intends to go on. Over a freeze frame of a calamitous spinning car hanging perilously in the air, the titles eschew naming the cast and instead describe each character type the film possesses. At various junctures throughout the movie, the fourth wall is broken not simply by Deadpool speaking directly to camera but also by his commenting on the fact he’s doing so or on some other aspect of the movie. The violence is bloody, the language R rated in the States.  About three quarters of the way through you imagine you’ll tire of this or else the film will lurch into something more serious but you don’t and it doesn’t. The fact that it is made by the same studio who also make the serious films it is ribbing and the fact that Deadpool has been a mighty success could, as I said at the start, give Marvel one giant headache. 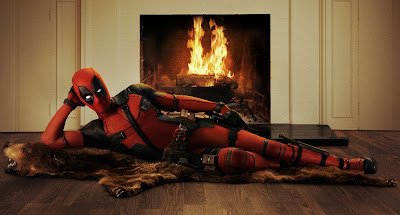 Wade Wilson is a former special forces operative turned small time vigilante helping people with their problems in his own wise cracking way. He meets Vanessa Carlyle settles down(ish) and then discovers he is terminally ill. So on nothing more than the recommendation of a smart suited stranger he opts for a radical form of treatment. It not only cures his illness but it also makes him invincible. Side effects? A horribly scarred body and face which means he cannot bring himself to go back to Vanessa who assumes he died.
Now this is not the cheeriest of scenarios but in the hands of writers Rhett Reese and Paul Wernick it becomes a wry, spry, dark, blacker than black comedy filled with kinetic action. Yet it is that script that makes it stand above the parapet; otherwise it would just be a very violent affair and nothing else. With gags, digs and jokes at it’s own and every superhero’s expense this is comedy gold. Knowing full well the likely viewers of the film will be the same people who watch other superhero films nothing is off limits. And with both a hero and antagonist who are essentially invincible there is carnage aplenty especially in vehicles and at the end for some unfathomable reason amidst a half destroyed warship.
If you’ve ever thought of Ryan Reynolds at all then it is certainly not in this mode but he gives a terrifically energised performance here managing to channel Ward’s scattershot personality even though his face is hidden under a red latex mask half the time. He’s lucky to nab another franchise after the disaster that was 2011’s Green Lantern but everything that film wasn’t this one is. No wonder he apparently used clever tactics to help get it made after the studio had originally turned it down. Amusingly Wade is adamant that his costume will be anything but green!
Ostensibly this film sits in the X Men universe and you can only wonder what Professor Xavier thinks of such ribald behaviour. There are two X Men in the film actually the very tall metallic Colossus and the petite, moody and ridiculously monikered Megasonic Teenage Warhead. They look like a comedy duo before they say or do anything. Ultimately it is the irreverence of the film that sells it and you may be surprised just how different it is from your usual superhero movie and more than that how much you enjoy it..