A Vintage Year for Scoundrels
Yes, it’s time to watch another old tv series and waffle on about it. This time we’re travelling back in time to 1966 to meet someone who’s travelled forward in time, sort of. I’ve never seen this show before so should be interesting… 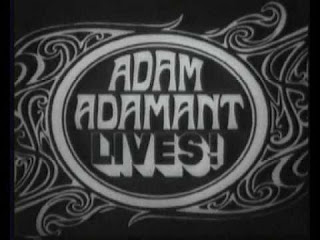 It is 1902 and renowned protector of the Crown Adam Adamant falls into the hands of his arch nemesis The Face (oddly he doesn’t show his actual Face) who promptly freezes him in a block of ice. 64 years later he is uncovered during demolition work and when he wakes up finds things have changed rather a lot. Quite what expressions passed across the faces of television executives when this proposal reached their desks is unknown but judging from this opening episode their leap of faith paid off handsomely. Belying its 49 year vintage, this is a smart, crisp well produced 50 minutes that still ticks most boxes in 2015 which is an achievement in itself. You’d expect it to creak and groan but just like its sprightly 99 year old hero, it is positively sizzling with energy and style. Somehow it manages to encompass two different decades by positioning Adamant as a champion in another, equally crime ridden era. It’s a great match.

Good ideas like this don’t appear from nowhere of course and the team behind the series had either form or potential. Producer Verity Lambert was not long off Doctor Who – with which this show bears some similarities - while head writer Tony Williamson was an up and coming scripter of inventive yet efficient shows and would go on to contribute to the likes of The Avengers, The Champions and Randall and Hopkirk- Deceased. A list of the writers of episodes is full of renowned names such as Brian Clemens, Vince Powell and Dick Sharples while the series was created by Donald Cotton and Richard Harris.
This first episode sets up the premise perfectly, playing out in essentially three acts- an initial sequence set in 1902, followed by Adamant’s awakening and initial disorientation in modern day London and then a case to solve involving the independent girl who’s taken him in. What’s brilliant about it is that none of these aspects are overplayed and all are superbly directed. Two helmers are credited- David Sullivan Proudfoot and William Slater and however they divvied up the work you certainly can’t’ see the joins. Rather impressively the 1902 stuff is shot with the same dynamic angles as the 1966 material which instantly establishes a style. It also hides some of the choreographed fighting and gives an edge to the villains who we are left in no doubt are dangerous whichever era they’re from. By the end of the episode there’s quite a body count.
Key to the success of the episode of course is Gerald Harper who seems to have been an inspired choice. He conveys Adamant’s sense of duty and fairness strongly and is also convincingly bamboozled when he wakes up. The character’s chivalrous but fair outlook suits Harper’s delivery and he proves quite a man of action seemingly handling much of the fighting himself. If there is a stunt double used, it’s well hidden.
Like all the best series of this nature, matters teeter on the brink of fantasy without going too far so we may have a villain who can freeze someone for decades but he does so with an injection rather than some freeze gun. Also the villains we meet in 1966 are operating a protection racket but there’s just the right element of quirkiness in Freda Jackson’s menacing Margo Kane and her rather dim henchmen. As the sidekick character Georgia Jones, Juliet Harmer strikes the right note between independence and reliability avoiding some of the `sixties chick` clichés. Adamant’s confusion is mostly confined to one sequence in which he wanders disorientated around the city. Whether onlookers watching were deliberately included in shot isn’t clear but it fits somehow.  In short it’s all a little out there but convincingly rendered.
Opening episodes of brand new series can be over cooked or under ripe but this is pretty much perfect. Let’s hope the series can match its potential.