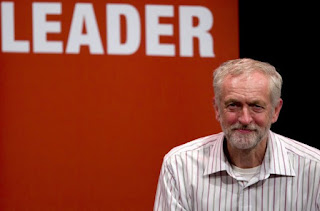 Jezza C- as nobody has yet called him- is the new Labour party leader despite ticking none of the boxes you might imagine a new Labour party leader would tick. He is something of a punt for a party unsure what to do next and seems to have gathered a youthful following on one hand and gnarly old socialists on the other. Unlikely bedfellows moving forward I’d say. He’s tapped into the Europe wide trend for anti- austerity driven partly by governments telling us things have recovered yet still initiating cuts. He’s way beyond the demographic normally deemed as acceptable for the modern age being neither young nor even young at heart.
Watching him during an interminably lengthy campaign which seems to have lasted longer than anything has ever lasted he is neither slick nor clever. Dogged and determined the most animated I saw him was joining in the singing of some ancient socialist song though it wasn’t possible to hear his singing voice.  His opponents must surely be in some way envious of the way he managed to avoid all accusations by simply re-stating his policies. For younger generations who have never heard a politician do this it must seem illuminating. Listen to any of his three rivals and they sounded too cautious, too all inclusive, too careful to not offend any one of a million vested interests. Jeza just said what he thought and breezed it. He did that old out of fashion thing of saying what he believes in and if you share those beliefs then you support him, if not you don’t. Recent generations of politicians have done the opposite, desperately trailing public opinion to carve policies they think we’ll all like.
Winning this election was the easy bit. He now has to undertake the one thing socialists find difficult to wrestle with; how to use power to fulfil their aims without upsetting so many people they become unelectable.
Because they have to be in order for the process to continue memories are short in UK politics. Not perhaps short enough for us to forget how Nick Clegg abandoned his lines in the sand days after the 2010 election but short enough for any collective memory of Labour’s pre- New Labour governments to have been forgotten. Listening to Jezza’s ideas and policies dredges up the ghosts of Jim Callaghan and strikes. We often blame Mrs Thatcher for Mrs Thatcher but it was really Jim Callaghan and a phalanx of union people who created the political landscape in which she thrived. I’ve read enough testimony and recall many nights homework by candelight to know that Labour handed her victory on a platter.


I wouldn’t exactly say, as many have been, that Jezza is `unelectable`. I’ve watched the way he can say anything and make it sound like common sense. He would be an awesome salesman for anything. It’s only when you read it written down that you start to doubt the common sense of it all. He seems to want to rebuild the Britain of the 70s- even his trousers are flared- yet things are different. Even traditional Labour supporters probably own their own houses now (would they give them up to return en masse to council housing?) and would no more dream of taking a bus or train to work than they would hang glide across the Atlantic. People’s aspirations are so different to 1979 and so are their inspirations. We are tech led now, no longer built from toil and engine oil, no longer divided equally into class. We are not just part of BritaIn we are part of the world; Jezza’s isolationist ideas (leave everytihng basically) are so out of touch with the interactive, interlinked world we live in. Good luck unpicking that Jez!
Weirdly perhaps I’d like him to succeed. I’d like him to initiate the sort of proper political debate we’ve not seen for decades about issues, not soundbites, policies not personalities. I just don’t want him to become Prime Minister.
Realistically it actually looks unlikely. When the next General Election campaign starts he will be 70 and even his enthusiasm not to say energy may be waning by then. I think he can inflict some significant blows to the likes of Cameron and Osbourne who think they relish the prospect of Corbyn but who won’t know how to deal with such a straight bat. I think he could make significant changes to Labour, who seemed weak and unsure throughout the last parliament.
Yep I do like the idea of Jezza but I doubt I’d actually vote for him and I don’t reckon I’ll need to.
Posted by John Connors at 11:45