It starts with a striking sequence in which an increasingly large number of people crawl across semi desert tracks through a remote village towards a shack inside which we see a cornucopia of items including a sketch of Heisenberg.  It’s doubtful whether any series has begun with quite such an obscure visual the (unexplained) significance of which adds a typically offbeat flourish to a season that, even more than the first two, uses some stunning photography against which the story unfolds. You feel the heat of the desert as much as you do the tricky situations in which our two `heroes` find themselves. Much of the first quarter of the season deals with the emotional fallout from the dramatic events at the tail end of season 2 but the slow pace works because we know these characters by now and there is no necessity for the sort of detailed plot turns that marked out the sophomore series. By the time the key firework are lit we’re fascinated by every moment. 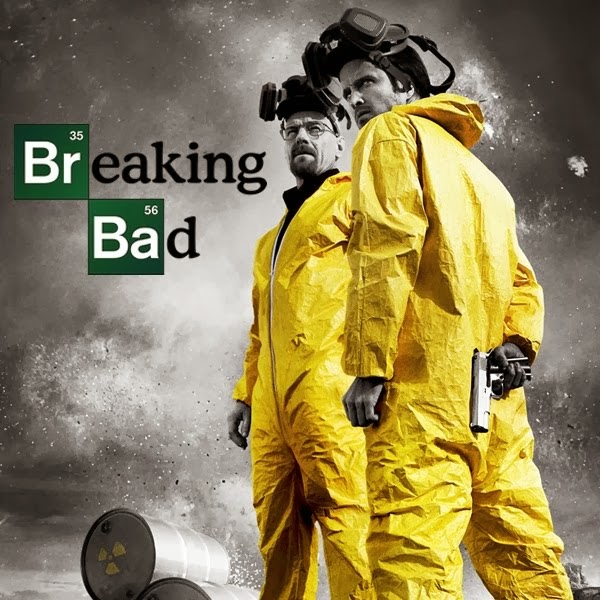 
Which is what has happened to Hank; Dean Norris is excellent as Hank’s outer bravado is gradually whittled away by fear and doubt. Episode 7 concludes with a car park shout-out between a suspended Hank and the twins (whose upbringing we get a clip of at the start of the episode) ending in a bloodbath. Hank survives but is left in hospital unable to walk and bitter at circumstances.  Whatever happens to Walt, this season paints Hank as a weaker more vulnerable character. His single mindedness is similar to Walt’s yet the sacrifices he makes- his promotion and now his health suggest an even more tragic figure. Across two episodes the family wait anxiously for Hank’s prognosis- Walt of course is considerably more anxious than the others but has to stay leaving Jesse kicking his heels – and playing around like a child-  in the lab. These hospital scenes build a palpable tension especially when it transpires one of the brothers had also survived. This tension builds as cops opine that they wouldn’t mind killing him off and there is a moment where, left alone at the nurse’s station, you think Walt will actually do it. There is also a scene of Twin Peaks- like intensity when the surviving assassin sees Walt watching and drags himself out of bed staring at him. It is only then we learn that he has lost his legs but he nonetheless drags himself across the floor pure anger in his eyes.
“Don’t make the same mistake twice” advises Gus in that casual but menacing way he has when he unexpectedly invites Walt to a nervy dinner. This inscrutable yet powerful character has worked his way to the top of the chain by subtle methods- and Walt knows it. You get the impression Walt is the most intelligent person Gus has ever had working for him something that both concerns and impresses him. Is there a slight hint of appreciation in his face when Walt demonstrates how much he knows? The “mistake” Gus refers to may be the missing crystal which Walt has noticed and which Jesse is siphoning off to run his own deals. Jesse of course looks like he may be making another mistake in hooking up with Andrea a single mother he meets at the drugs support group. Their relationship starts off clean- as indeed it did with Jane but the spectre of drugs is round the corner. In the wonderful way the series has of circuitously returning to previous points it turns out her younger brother is the kid who set up his friend to be killed last season.
The season concludes with game changing moments that once again re-position the series. The crucial act is Walt’s saving of Jesse’s life after the latter sets off to kill the two henchmen responsible for the murder of Andrea’s brother. That act is so shocking that you do have a certain empathy with his actions but we already know Jesse seems incapable of carrying out such a cold blooded act as we have seen earlier on more than one occasion. It is Walt who saves the day in one of the most memorable moments of the series when he runs both the intended targets over in his car. This of course sets off a tense finale.
“No more half measures” Gus had warned Walt but now that the latter has acted rashly on the advice, he finds his days working for Gus are numbered. Virtually the whole way through the series to this point both Walt and Jesse have been the victims of circumstances or else we’ve seen what they are planning. `The last episode `Full Measure` turns this around so it appears to us that Walt has over reached himself as he is taken to the lab to be killed and seems to be prepared to give away Jesse’s location. The surprise is that this turns out to be a ploy to allow Jesse to despatch Gale the fastidious assistant from earlier who is brought back. At the closing moments it is debateable which of Jesse or Gale is the most terrified by what is happening.
It’s too easy to layer superlatives on a show like Breaking Bad and there are still, for me, a lot more episodes to go so you can take it as read that words like “amazing”, “brilliant” and “thrilling” are close by. What is really impressive though is the synergy that has kept the series in a powerful shape and twists the plot takes leading you to unexpected places. There are so many examples of shows which either start off strongly then tail off or begin in wobbly fashion but improve. Breaking Bad started with one of the best opening sequences anyone can remember and it has constantly maintained that standard. It seems to have no weak links; if you were being very, very, very picky you might wonder whether Gus is really looking hard enough if he has a choice of only two cooks, you could say that as the events of all 3 seasons have taken place over a relatively short period there are clues aplenty that the police should have picked up. You could question the moral undertones of a series that has us rooting for two guys who have killed and made huge amounts of dangerous drugs. Then again you could watch `Fly` or any of the shootout sequences or Walt’s running down of two henchmen or the way that Skylar has gradually been sucked into Walt’s alternative world or any one of a hundred things and realise this is the drama by which all this decade’s subsequent TV drama should be measured.