No sophomore blues for ITV’s involving drama
The thing you often find about part 2 of a drama is how nothing much seems to happen. Having set up the premise with a dramatic flourish in the opening episode, too many dramas tread water in their sophomore week, holding back the revelations till later. Not Broadchurch. As if this is a 4 parter, the developments come thick and fast in episode 2; indeed it is pacier than the first and certainly has more developments. Beautifully rendered and scored with atmospheric incidental music courtesy of Olafur Arnalds it has more than enough to keep you watching. 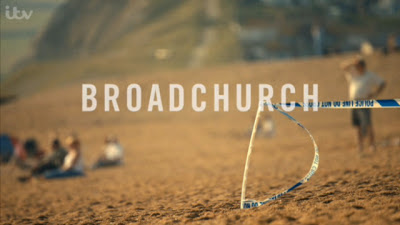 Where episode 1 had that tracking shot down the high street, the scene you’ll remember from episode 2 is when Danny’s mum is walking through the supermarket aware that everyone is staring at her. Or maybe this is how she imagines it. In a simple moving moment she spots the Coco Pops cereal that she must have bought for Danny a thousand times. And it is here that Jodie Whitaker gives us a momentary smile that fades as quickly as it arrives. This may have amounted to a couple of lines on a script somewhere but it tells us so much about loss.

Yet as the episode progresses our sympathy with  other members of her family begins to fade. I started to think- is this  a major diversion? Maybe it means she did it? That’s the trouble with great shows like this; they make you think too much!

Anyway, her daughter for example has cocaine in her room and she lies as to where she obtained it. That’s a small lie though compared to Mark Latimer who is our first big suspect. It won’t be him will it; unless this is an early double bluff? After he is spotted on CCTV on the beach the night Danny disappeared, he denies it and obfuscates for England under a series of questions from the frowning Hardy. This is a great scene as our image of him as the stoic father gamely supporting his grieving his family begins to peel away.

Other strands yield potential too. Ambitious local journo Olly Stevens’ (Jonathan Bailey, excellent despite a slightly roving accent) national aspirations are placed into sharp relief by the way we see Karen White (Vicki McClure) and pointedly unaffected by events) behave. There is a thinly attended church service taken by the nervous Reverend Coates (Arthur Darvill, interestingly furtive) and a strong scene in the hotel bar where a villager expresses the sort of local views usually given to fictional Mayors of American towns best by some disaster. In other words, when can be get back to business. This social undercurrent adds much to the veracity of the drama. Then there’s creepy phone engineer Steven Connolly (Will Mellor playing effectively against type) who can hear voices apparently. For a moment it all goes a bit supernatural but he’s just a bit odd isn’t he?


The most shocking moment though occurs when the Latimers hand Miller a list of potential suspects- “but these are your friends” she responds with disbelief. It signifies just how isolated such a life changing event isolates people from even those who might be considered close to them. It’s not mentioned in the script but a large proportion of murders are committed by someone the victim knows.

The rapport between Hardy and Miller remains sharp and awkward; extremely well played by both David Tennant and Olivia Coleman and this week also brings some stellar work from Andrew Buchan, Arthur Darvill and in just a handful of lines the very scary Pauline Quirke. In the instant way Sherlock did last year, Broadchurch is looking set to be the must see drama of the year; if you’ve resisted all the hype and fuss so far then it’s time to jump in.
Posted by John Connors at 20:48